Wheels still on the wagon BUT! think there is a slow puncture

As the title, think I am getting there but there are many niggles still there and I still have the remnants of my cough - hence the slow puncture analogy!

Anyway, not a bad week - after the run on Monday and the Tuesday spinning session I decided to go for it and did my Neroche off road 10k route on Wednesday, things went well, but not quite as quick as I had hoped, I don't seem to have the speed of previous years, perhaps each year slows you down??

The Neroche run was very pleasant in winter sunshine, that was warm when out of the wind, there were a lot of dog walkers out which meant lots of walking past barky dogs, even though the majority of owners had them under control. I put it down to half term as there were a couple  of family groups. It was fairly dry under foot. My left Hamstring seems to niggle but not get any worse. I felt ok and reasonably strong, I wonder if the spinning is now starting to pay off. 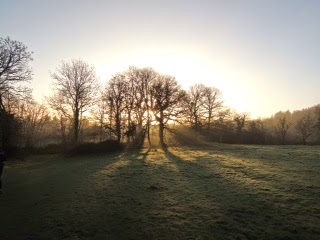 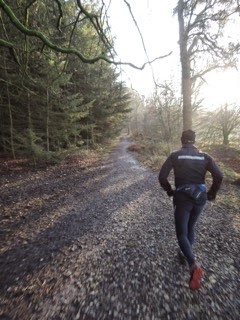 Rear view of me!!! [taken at christmas]at Neroche
After a two day trip to my sons in Gloucester to help him fit a shower and a bit of tiling Saturday was a bright sunny day, to good to waste so a run around the town to clock up another 4.5 miles, this was hard, heavy legs etc. !!! I thought it might be a good loosener for my dress rehearsal on Sunday, I did start to wonder, why is it that you can feel ok in the week and a couple of days later feel rubbish, and everything seems wrong!! funny thing the body, as I have said before!! many times.

Anyway, Sunday dawned dry, bright sunny and very,very frosty - I was out of the door by 7 am and drove the van [nice changing room for the finish] down to Seaton Hole, I decided to do the Seaton Hole across to the Fountains Inn at Street and back including the dreaded beach!! I knew this was about 9 miles, equivalent to the Grizzly Cub run route, but with added climbing. I drove down on quite icy roads, and kitted up taking a drink and a snack. I walked up the first climb, which was quite stiff, but got me warmed up, 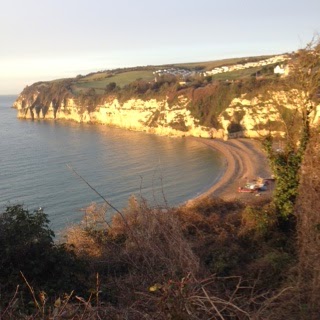 View down into Beer after my walk up, looking over to Beer head, the route going along the cliff edge, a beautiful sunny morning, but freezing!


I then descended down into Beer, very quiet as it was only 7:30 am on a Sunday!  I ran slowly up the road out of Beer, keeping my pace steady before going off road up to Beer Head, the grass was white over with Frost, most unusual down here, I felt good on reaching the coastguard station, pleased with the progress, I ran across the cliffs before descending down through Great Seaside and into Branscombe, this is part of the Grizzly route and can be quite slippery when wet.
It was then a walk up out of Branscombe mouth on to the cliffs the steps in places pulling on my calf muscles and along the top, not to bad under foot and frozen in places, I descended down through the woods, the blue bell and garlic shoots just starting to appear and the raucous noise of the Rooks above me. I still felt quite OK as I hit the road, taking care to keep the pace steady. 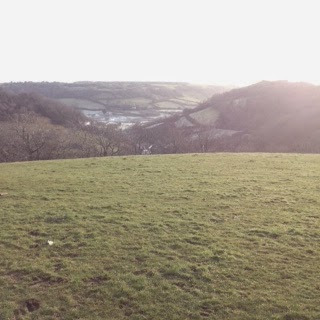 Branscombe in the distance before dropping to the Fountains Inn, the white is frost on the fields.


It was good to see the road works now finished and an easy run down the road to Branscombe, I hadn't seen a soul since leaving Seaton Hole, think they were all tucked up with the central heating on full blast.
I finally met another runner as I ran down by the mill stream to Branscombe mouth, I assume another training for next weeks Grizzly, I saw several more before I finally got back to the van.

I ran down and onto the beach as that's the route the Grizzly takes, really hard work on the loose shingle for about half a mile, the tide was quite high too I had a snack and a drink whilst along here, trying Sesame snacks, quite good I thought, easy to eat and digest. 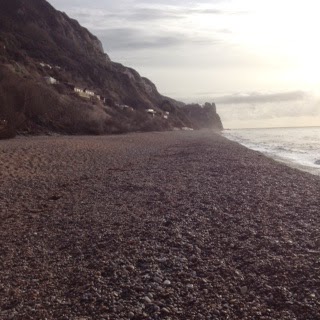 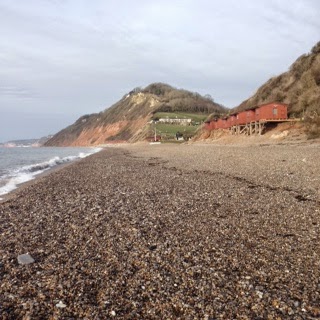 Looking back towards Branscombe and the  chalets undercut with the high tides washing away foundations.

After what seemed for ever I finally went back on to the coast path, really nice to have a solid path under you feet, a steady climb up to the stairway to heaven, still feeling ok and ran the majority of it up to the STH that is!! even that I waked a good pace up to the top and kept my heart rate down, it did seem easier than normal [weird!!]

At the top another drink and snack know I still had the big climb out of Beer. along the cliffs, the sun had disappeared and the weather starting to change [ as the forecast said] A steady run down into Beer, still feeling good:-)

I ran most of the path up the hill out of Beer before walking the top bit, quite steep in places, I still felt reasonably strong, descended down to the Van and added a few hundred yards by running up to the next turning to ensure I did 9 miles, in fact it was 9.13 miles, pleased with that and felt a lot better than my last run down here, I did feel I could have gone further, time wise not great 2hrs 1 min but there was 1600ft of climbing and I felt ok, so a good rehearsal and I have made my decision to do the Grizzly next week, providing I dont get any more injuries and I will be able to celebrate my 64th Birthday on the day, just as I did on my first Grizzly when I was 60 !!

I was really pleased with the sesame snaps, and I did felt reasonably strong throughout, so very positive, perhaps spinning is paying off. a couple of short runs this week and a spinning session should see me well.  The excitement of the day should improve my time, I must remember to pace myself though and enjoy it.