The thermometer at 7 am on Sunday morning said it was 6.4 degrees C. I think Autumn is here.
Breakfast was muesli with banana and a large mug of tea, before gathering my bits and pieces for an MTB ride on the Quantocks. I had checked my bike on Saturday, finding I had a puncture in the rear tyre, everything else working well, so Camelback loaded with water, tools and several cereal bars. Bike rack fitted to the Jimney and bike loaded  - this was my first MTB ride for several months. I decided to go for Goretex boots after the heavy rain on Saturday, thermal vest and thin fleece, with 3/4 tights.I took my mudguards intending to put them on when I got to the car park.
The weather looked good, if cool, as I drove over to the Quantocks and Lydeard Hill car park. There were a few cars already there, several with bike racks, now empty. Jay and Andy soon arrived, my riding partners for the day, Andy complaining of an upset tum after a dodgy burger the night before. It would be interesting to see how he got on with his single speed bike!!
We set off along the main ridge, not really know what route we would take, initial few yards, normally very muddy showed the trail to be relatively dry, I was pleased as I had decided against mudguards. We followed the trail past Triscombe stone, my off road skills clearly rusty on one stoney descent. We pushed on down the drove, a beautiful morning, unusually the trees still not really changing colour.  Swooping in and out of the trees before emerging at the tarmac road at Crowcombe Park Gate. The climb up to Hurley Beacon was hard as the trail was very stoney, loose and slightly off camber. Fantastic views from the top, all around, Hinckly point one side, Exmoor the other, the grass was now showing signs it was summers end and the heather had lost its purple sparkle, appearing dry and brown. 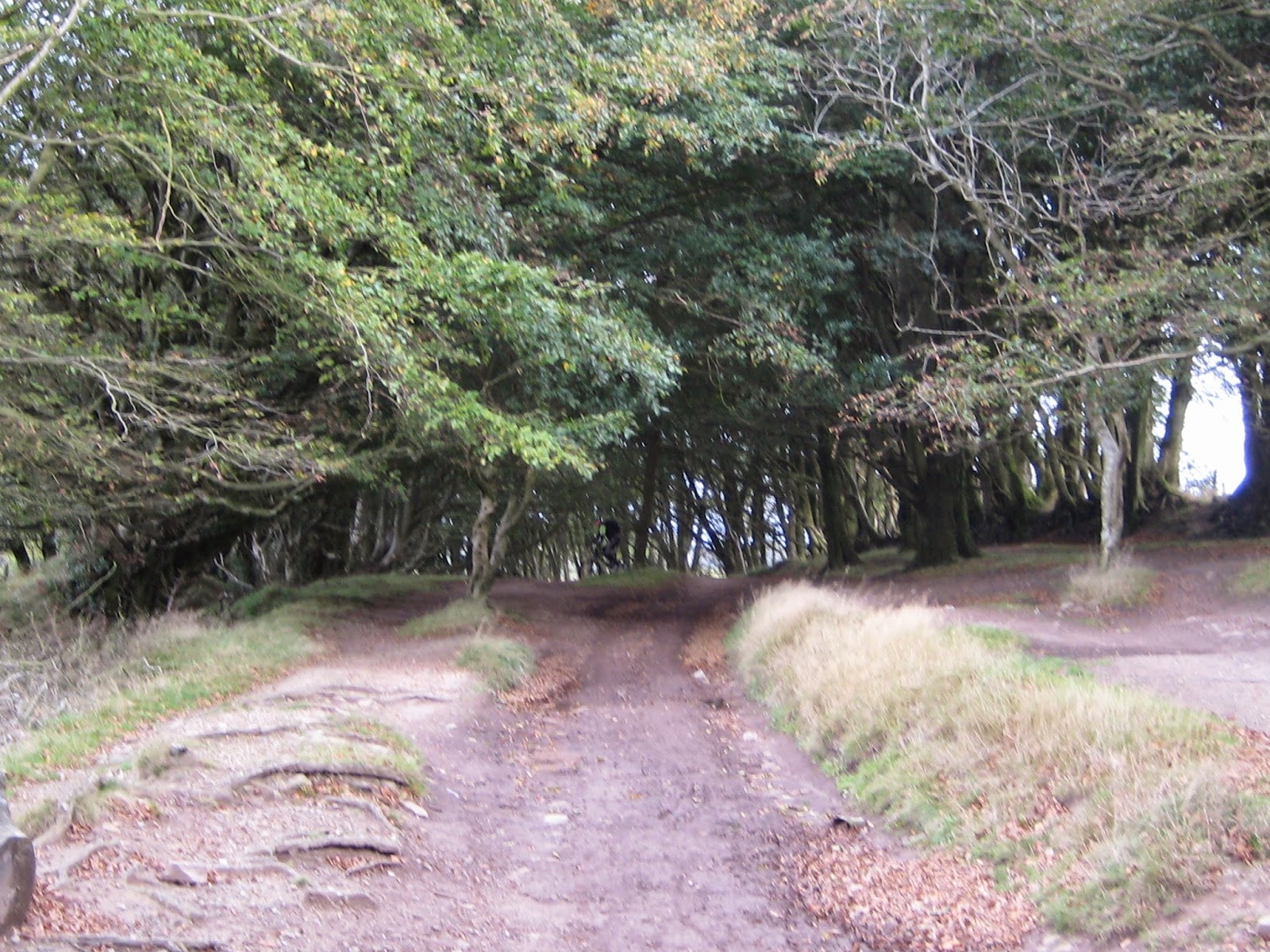 Heading for the Drove 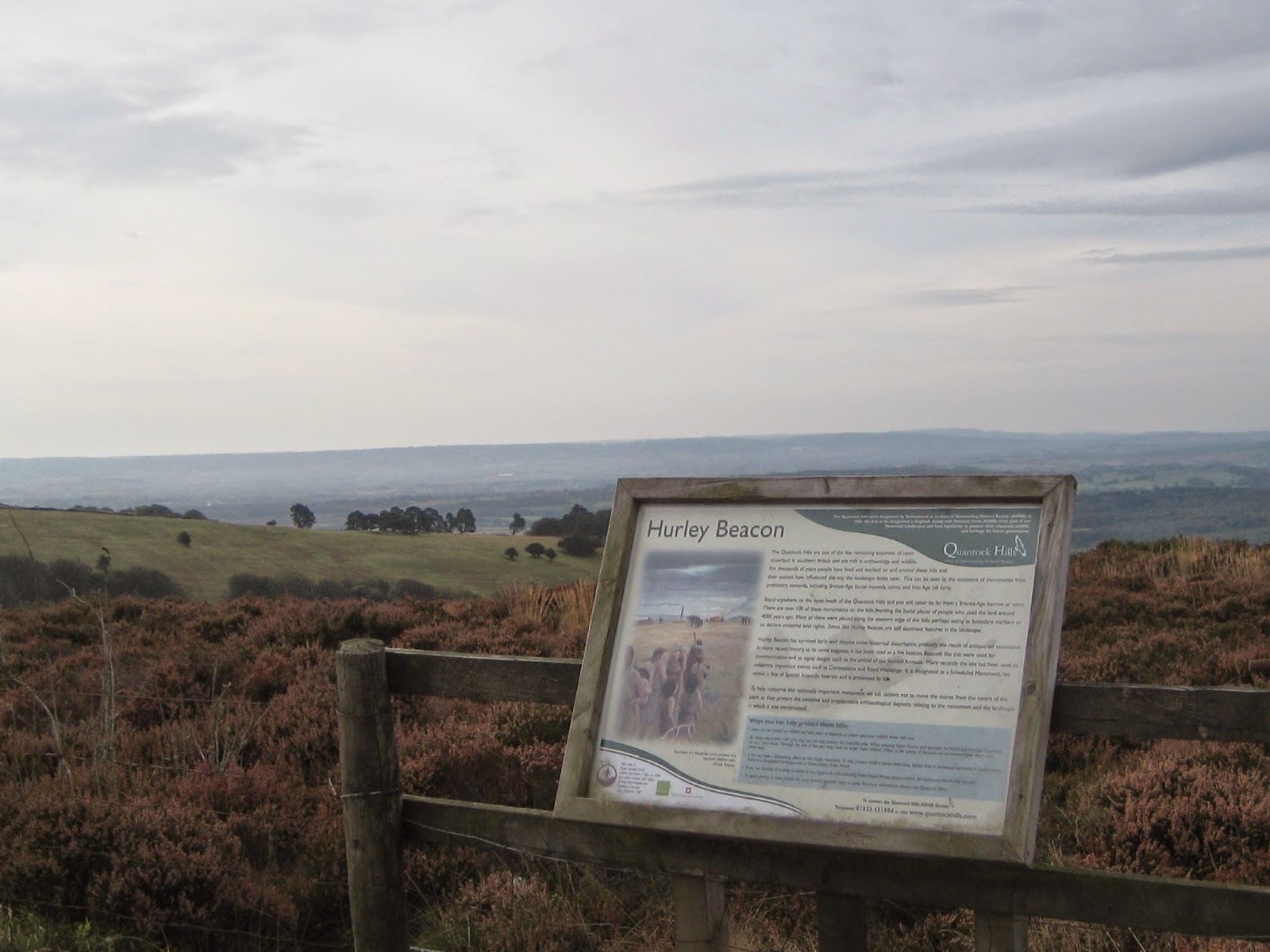 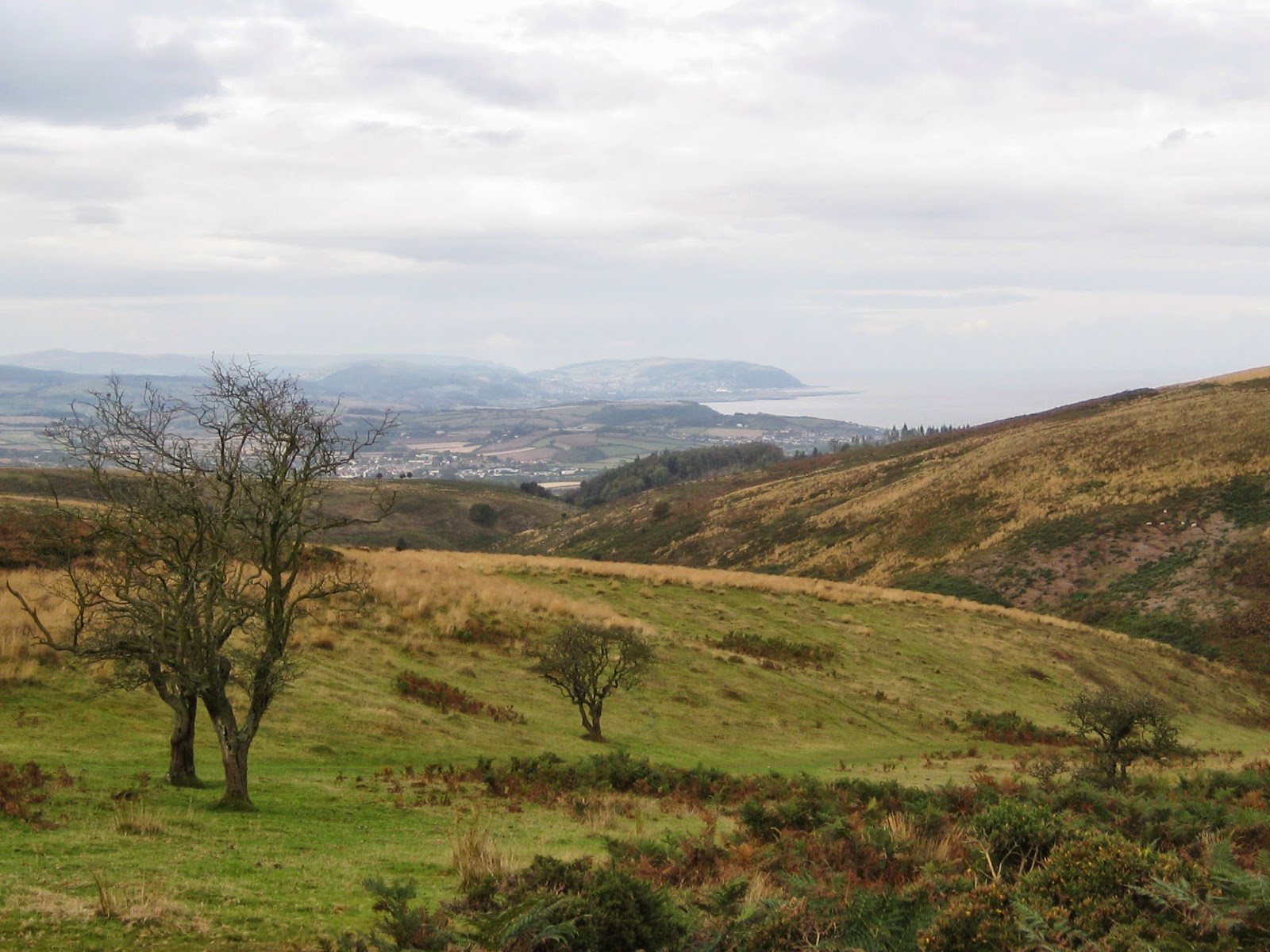 View down Weacombe towards Minehead 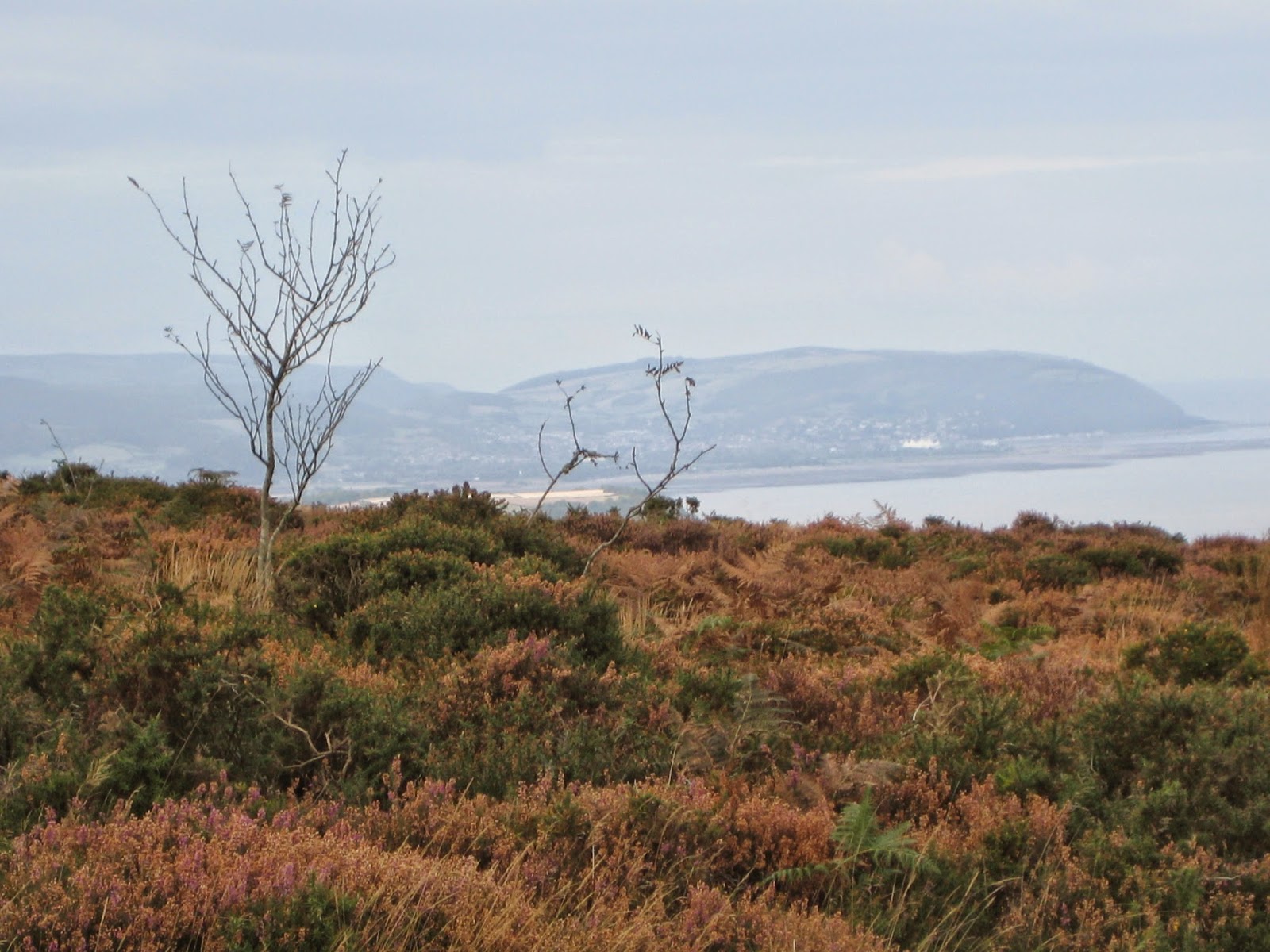 Minehead in the distance 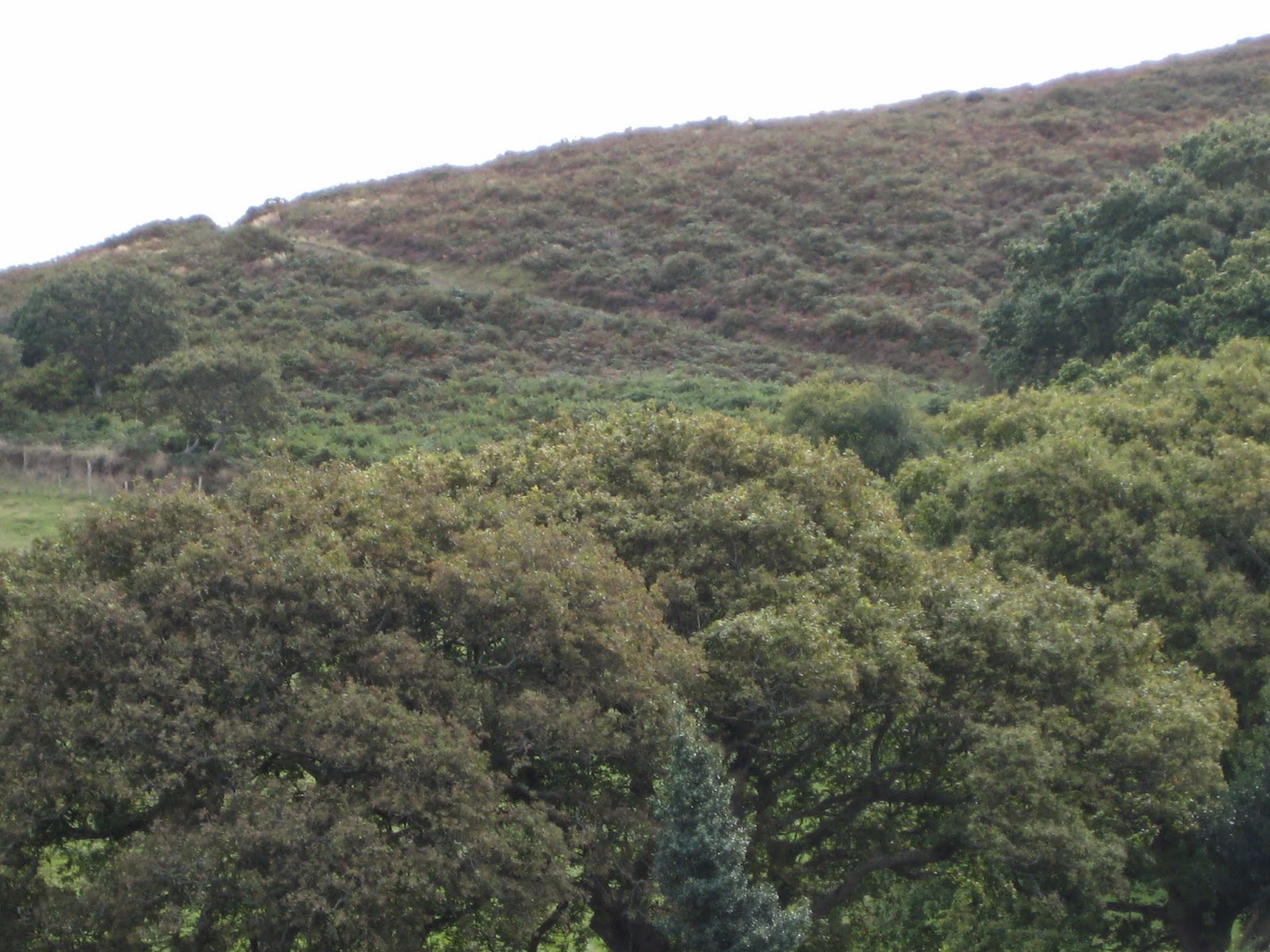 Another climb near Pardlestone hill 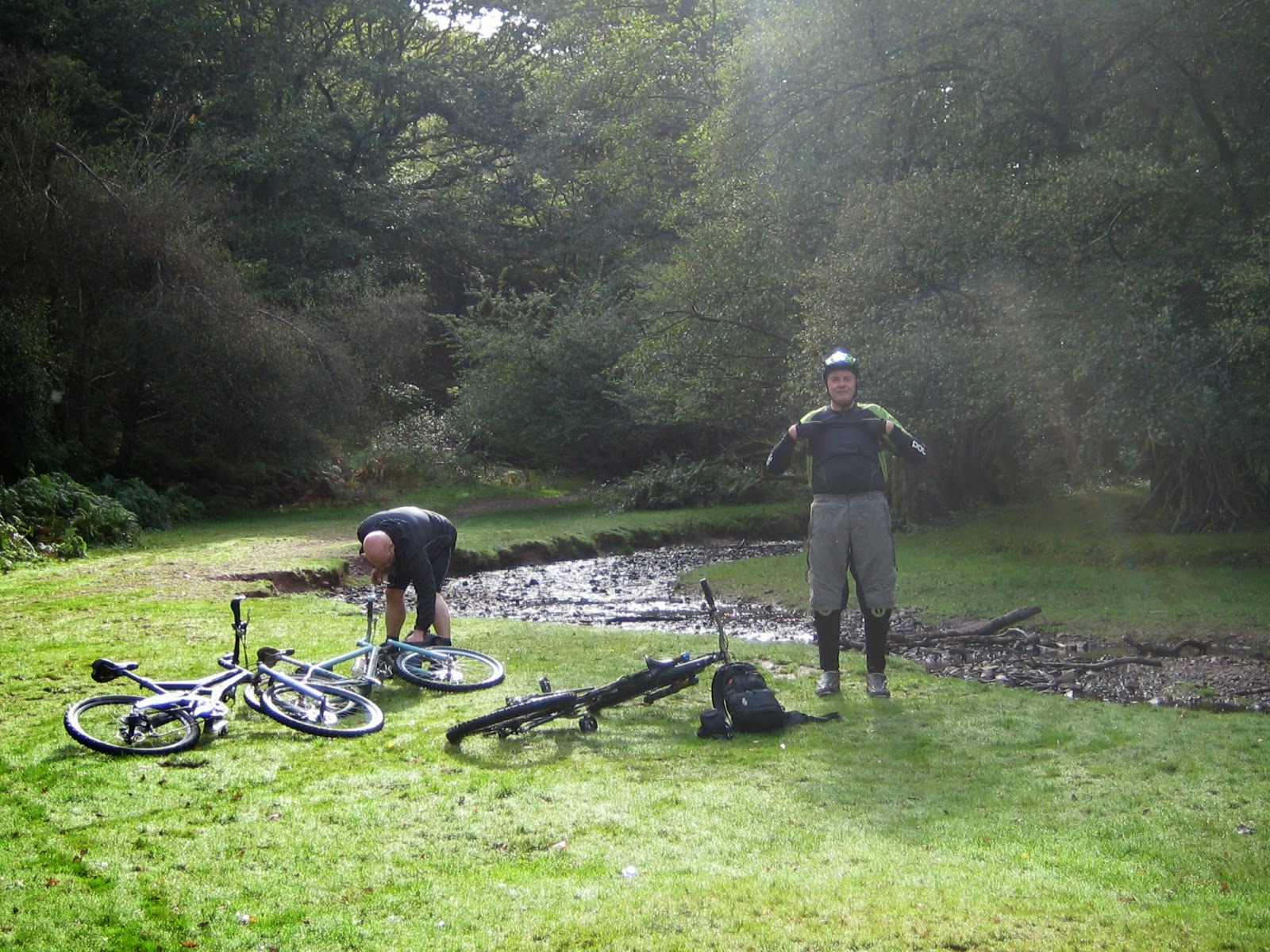 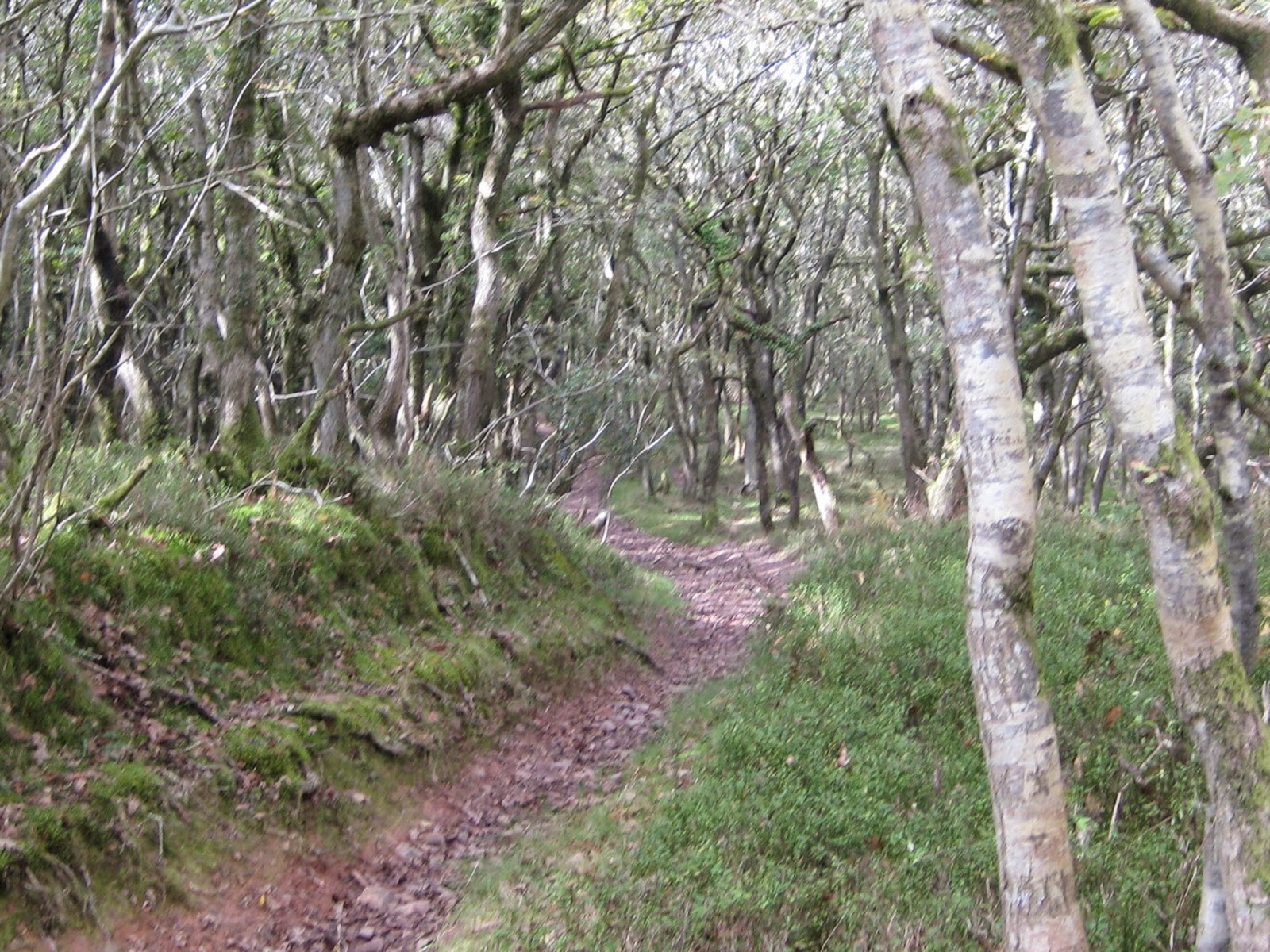 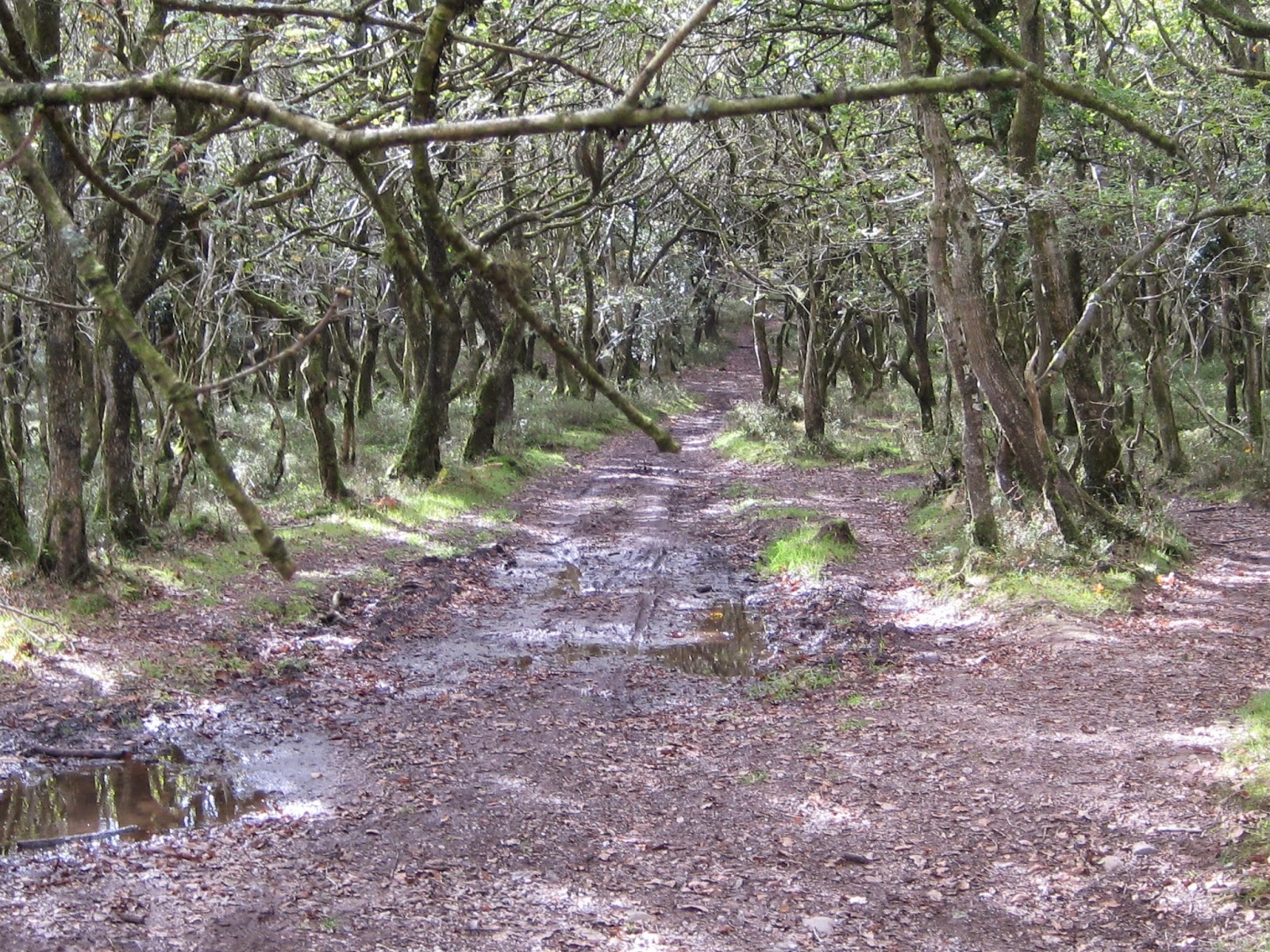 The run down to Halsway post was fast and furious, the trail just damp enough to take away some of the loose stones. We were the only ones on the trail, the weather was great, a great start to the route.
A quick drink stop at Halsway and a decision to head for Smiths Combe, the Combe of choice in the late nineties and early millennium. We sped on [the word sped, used with care!] A herd of deer crossed our path leaping the two meter wide track with ease.
We stopped again at Bicknoller Post to enjoy the views over Minehead and down Weacombe, another favorite descent, I just hoped my off road skills were improving enough for the technical descent of Smiths. Andy and Jay quickened their pace as we set off and for some unknown reason missed the turn off for Smiths, I waited for their return!! Its several years since any of us had been down Smiths, so we were all apprehensive before setting off.

We rolled off down the grassy slope, led by Jay then me and Andy bringing up the rear, we gathered speed, leaping a sunken track part way down before entering as area under the trees that was full of roots and loose slippery rocks, the trail twisted and turned getting steeper as we descended, my eyes were watering despite my glasses, my brakes were on and off, my bum over the back of the bike to avoid an early ejection over the bars as I hit the roots on the steeper sections. I finally came out the trees to a very sharp twisty drop into a stream crossing, PHEW! I had made it, what a descent, my skills just about coping, I have ridden Smiths many times over the years, this time seemed harder due to skill levels not being quite what they should be.
Jay had already gone on, Andy was following me down and emerged soon after. We then set off through the windy twisty bit through streams , fantastic single track. The end was signified by a very steep up hill, time for break and a snack. We all agreed a fantastic route and a great descent.

The climb out is a challenge, none of us made it without resorting to walking near the top.
We made our way round the single track , continuing on round Pardlestone hill before a sharp right bridleway that led us past the now derelict Alfoxton Park hotel, once a thriving country hotel. The steep tarmac road had several hairpin bends, that were covered in gravel, care required. We emerged by the Dog Pound on the edge of Holford, an interesting building where stray dogs were collected.
It was then an upward plod through Holford Combe, following the tarmac road through past pretty cottages, past the Hotel before once again hitting the off road trail. We stopped at the clearing just outside the village for a break and snack. The stream normally quite deep and wide was reduced to a very shallow slow flow. The sun had now gained height and was very warm in the sheltered Combe,
We worked our way up the Combe, dipping in and out of the streams on our way up, round the many trees that came down last winter, the trail had changed somewhat from last year because of the storms, changing the route of the stream as it tumbles down the valley.

We continued to climb up past Dowsborough Fort, I was pleased to reach the top without having to walk, it was hard and took all my skills to keep up the momentum to keep moving forward, despite the large loose boulders and tree routes trying to dismount me!!
Jay managed it, but sadly Andy was reduced to a walk, mainly the single speed and his fitness not really matching!!
We continued on round the Great Bear, a lovely piece of single track, normally very muddy, but today it was in great condition and we managed to get a good pace through trees, round and over roots before emerging on to the unclassified road up to Deadwomans Ditch. We headed back to the main ridge at Crowcombe Park Gate. I reflected on a few weeks ago when I ran around this area, its amazing how different it was bike and running, you notice different things, the trails are never the same etc.
We headed back along the main ridge, past Triscombe etc. we still didn't meet any other bikers only several family groups with large numbers of children and dogs.
Back to the cars, well satisfied and tired even though we only covered 16 miles. The sun was out and the car park now very busy. A great ride, but! then it always is!!!!

Finally just to finish my post - a couple of photos taken through our french window in the dark  of our evening visitors enjoying a few peanuts!! 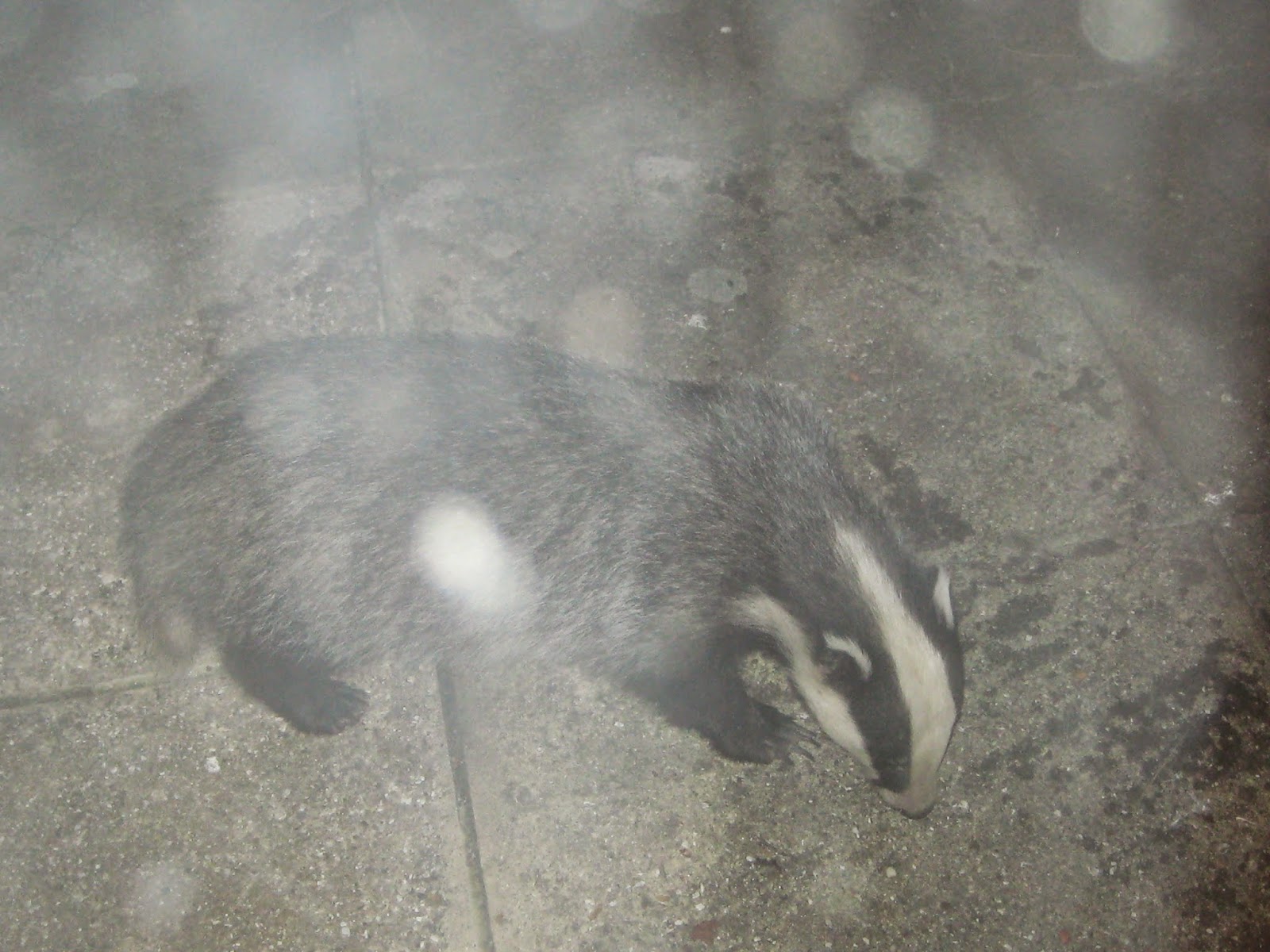 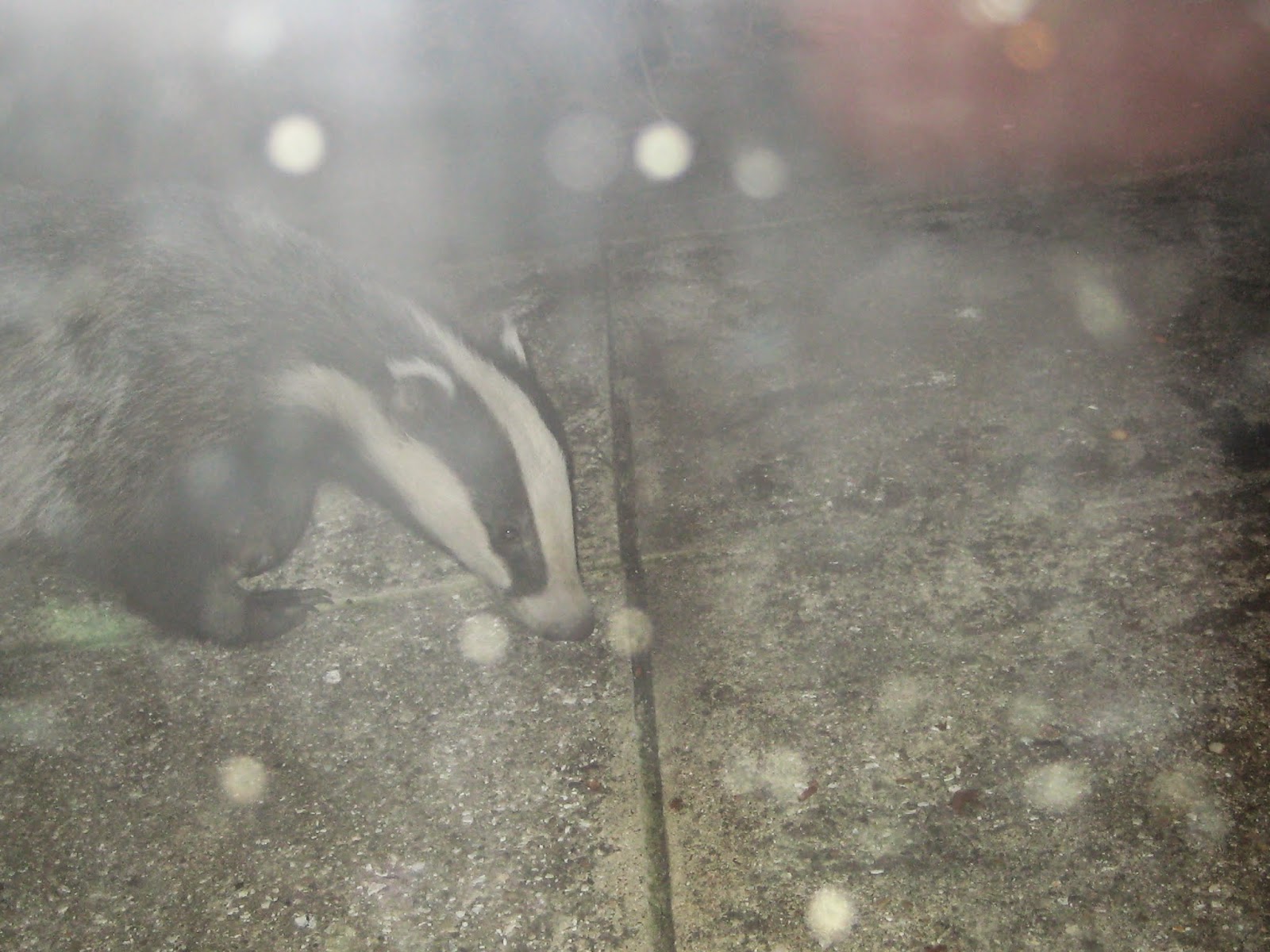 They keep digging up a particular cyclamen plant in the back garden, don't know why? but have have had to replant 3 times??? there were 2 badgers this time, we are unsure where they come from or where their home is!!