A frosty run along the coast

The thermometer in the lounge said it was -2.5c outside and on the radio Somerset Sound was reporting temperatures across the county down to – 7 c!
The pink glow of Dawn started to appear over Windwhistle hill giving signs it was to be a beautiful if very cold day. Mrs Ian B was disappearing off to Yeovil early for a Hair appointment early so I was outside in my dressing gown defrosting the car and the van.

Having waved her off by 8:00am I prepared for a long run down on the coast, I made up a Tailwind energy drink and rolled 6 marzipan balls for a snack, my intention was for a 10 – 12 mile run on the Grizzly course. I also took along a coffee in my flask along with a piece of Christmas cake for when I finished I decided it would be needed.

I took the van this morning, rather than changing outside when I got back after the run. The roads down to Seaton were very icy in places, particularly where water had run off the fields, and are not best known for their gritting on icy mornings!!! The drive down was stunning with fields covered in frost, I decided I would risk running from Seaton this morning, and parked on the seafront [free of charge this time of year] as it happens very close to the start and finish of the Grizzly.
I kitted up with 2 longsleeved layers, a helly vest and my Asics winter trail top which is wind proof at the front, my tights, compression socks, Salamon Fellraiser shoes, topped off with a buff to keep draughts out and a hat and thin fleece gloves. It was very cold when I set off along the front, well below freezing, still dogwalkers were out!
I jogged up the first hill and went through the park, looking back Seaton looked almost continental, in the sunshine. It was then a road slog before descending down to Seaton Hole and the start of the real climbing, I was reduced to a walk up the very steep path to the top of the cliffs that separate Seaton and Beer, but it was a spectacular views this morning in the 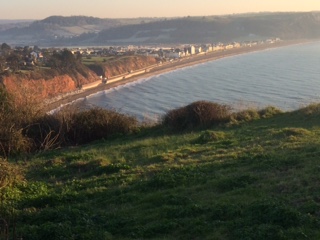 View back from cliffs above Seaton, I took my camera, but the battery was flat so these 2 taken on my phone!!

sunshine and a pleasant run down into Beer, normally very bustling in summer with visitors, but not today, the only visitor was me. Another climb up to Beer Head and the coastguard station [ex] I was very surprised to find the mud and turf all frozen and hard to run on, making it awkward in places as the mud had frozen in ridges where others had  walked, twisting my feet, I couldn’t decide if it was better or worse, I met one dog walker as I approached the summit, both agreeing it was a cracking day to be up there. The fields atop of Beer Head were white with frost and as I started to descend down to Branscombe mouth the view up the valley, showed it very white where I was to run later. The descent was easier today, normally very steep and slippery with mud, the path exits at a place called ‘seaside’ very appropriate, no signs of any cattle, clearly the farmers keeping them in for winter. 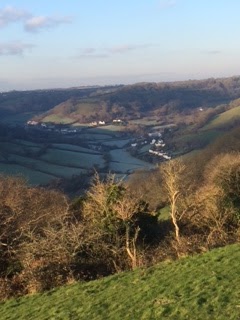 View down into Branscombe, fields white with frost

The sea was gently crashing on to the shingle [ sounds daft gently crashing! But it was non violent] as I started my next ascent up from Branscombe, again another walk and time for my first snack, 3 marzipan balls. I was just comfortable with the heat, hot, but not too hot, the run along the ridge was very pleasant, good views down to Branscombe with its frosty white thatched cottages and fields, I descended down through the woods, noticing the bluebell/ garlic shoots already poking through for the spring, I hit the road at the Fountains Inn at Street, and turned sharp right to run down the valley road back to Branscombe, I still had not seen anyone since Beer Head, the steep road down into Branscombe past the national Trust blacksmith was very icy and I found myself walking careful to avoid ending up on my back!!!

The run from the road down to the Mouth is really nice, sadly it comes to a halt when I have to decide, ascent, Undercliff, straight assault or the dreaded beach!!! I opted for the beach as that’s the route of the Grizzly approximately threequarters of a mile, a very hard run on moving shingle, I tried walking and running and found, running seemed easier as you didn’t sink in so much, even so it was a good 10 minutes of hard work before picking up the undercliff path that leads to the ‘Stairway to Heaven’ and the top of the cliffs. The beach was very beautiful this morning, empty, only the sound of the sea on shingle for company. I soon found myself at the bottom of the StH after a muddy track to the start. I walked as always, but didn’t feel too bad, and soon reached the top. Time for a snack and drink before the final 4 miles back. The mud was now starting to soften underfoot, making me more careful where I placed my feet. I ran down into Beer and it was still deserted, and started my climb out up the steps, I find steps really difficult, these were no exception. Down to Seaton Hole again and the final push along the road back through the park and down the hill to the van and the finish, my calf muscle was now starting to pull a little and I did feel a little tired, but overall thought the 11.3 miles and 1880 ft of ascent went well, less than 2.5 hours , a pace of 12.5 mins a mile, not the fastest, but another building block in my preparation, the calf muscle is a worry as it has caused some discomfort before, feeling as though the muscle will go into spasm!!


The front at Seaton was now quite busy and I was pleased I had the van as a changing room, finishing off with coffee and Christmas cake !!!!
Posted by IanB at 07:15