Got up this morning to a text from my son Tim informing me that he had entered us [not just him!!] for the 20mile coastal run. Exe to Axe. We did enter last year but pulled out due to a bereavement in the family.

So, after buying new road running trainers yesterday, Asics Nimbus 14 I now have to put the miles in before March 29th!! 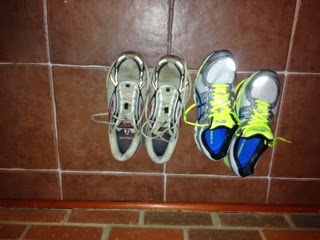 Out with the old and in with the new [trainers]

That’s 2 big events for March, the Grizzly Cub run which is 9 miles around Beer in , this is on the 1st, my birthday! And then the Exe to Axe at the end of March. That gives me a few weeks between. There is also a 100 k Audax cycle event called the Dunkery Dash which is from North Petherton to Dunkery Beacon the highest point on , that’s the week after the Cub run.
Tried my new trainers last night and did 5.1 miles around the town, felt ok, which is a relief, as buying new shoes is a challenge and you never know whether you have got it right.
My main issue is still my right calf muscle, I need to take care of that, particularly with the spinning class, I need to massage etc and perhaps even think about physio.
A busy couple of months ahead to prepare for a busy month of March.
Then there is the 5 Tors on Bodmin Moor on the 19th April, cancelled last year, but hopefully 19 days between Exe to Axe I will recover enough to take part.

A very grey Sunday morning with a very cold feel to the air, no frost but the thermometer says its 2 degrees!
kitted up, which on these cold mornings seems to take ages with Buff, hat, gloves and winter cycling boots.
Mike turned up with his balaclava on! we were going to head to West Bay, but the wind was in a northerly direction so it was towards the levels instead. Kingsbury Episcopi via Shepton Beauchamp was the first goal, the downhills were very cold but were seemed to have got the layers right and we agreed we were warm, the fields were very grey and the black outlines of the trees stood out, the roads were wet and muddy and we tried to avoid being too close to the edge as thats where the potholes and mud are. The houses at Thorney still showing the signs of the flooding from last year, with piles of skips outside in the roads and builders vans everywhere, this area was under three feet of water this time last year.As we entered Langport there were daffodils around the entry sign and as we dropped down to the Athelney road the air seemed even colder, although the Garmin said not, 2 degrees!
We met lots of other cyclists as we headed towards North Curry and managed to get in a group that were moving at a good pace. We left them at North Curry and turned off to head back over the hills and home.The climbs kept us warm, but not enough to get too sweaty.we stopped at Crock street for a few jelly beans to get us over the final hills.Today  I even saw the first lambs of the year!!
42 miles covered, not the fastest pace but the miles count, even though it was lunchtime the temperature had not increased and the grey skies didn't get any brighter, washing the bike down was a very cold experience, it was good to get in and have my homemade parsnip soup and cheese scones to warm me up.
The afternoon was spent taking down the Christmas decorations, always a sad occasion as we return to normal everyday life, lots of garden and house decoration to sort out, and still lots of chocolate left!!!
No Bikeability this week.spinning tomorrow, and perhaps a run on Wednesday.