10th December 2016
By the end of yesterday I had run 797 miles and cycled 2914 miles so I need to cycle 86 miles before the end of December to hit 3000miles, less cycling than last year but I have managed to run 200 miles further! Given the ever changing weather at the moment I hope I can get the extra miles in for both running and cycling.
Sunday 4th December. The week started off with a very icy Sunday morning, so my cycle ride had to wait till after lunch, when I hoped the ice would have melted, making the roads a little safer. It was however a glorious morning, clear blue skies, little or no wind, so after a bit of hydrangea cutting back and a nice homemade Leek and Potato soup for lunch I layered  up to head out on my bike, at least the ice on the bird bath had all but gone!
The temperature on my Garmin was only 3 degrees as I headed towards the levels and Norh Curry, but, as went down the first descent there was a water leak, from one of the houses, the water spread over the road making it a sheet of ice, I slowed and walked the few feet across to safer roadway. The temperature was falling as I dropped down to the levels, something I often find happens, it’s definitely colder and damper on the levels. Roads were very quiet, I guess Christmas shopping and the cold weather kept everyone at home, same for cyclists, as I didn’t see any on my ride. The low sun didn’t manage to penetrate some parts of the roads where they were in the shadow of high hedgerows, so care had to be taken in places to avoid a fall. I went over North Curry and back round Slough Green, where the climbing back home began. The afternoon was getting late and along with this the temperature was falling and by the time I got to my last heill home, it had dropped to less than one degree, very cold, the low sun was now an irritation as it was shining straight down the road, I couldn’t see where I was going! I got home and noticed I had not really managed to get  sweaty! My layers were still relatively dry. A large mug of tea and a shower soon warmed my up 32 miles covered.
Monday 5th December, In contrast to Sunday Monday was damp and foggy, as I had to work later in the week I decided to get a long run in. the ice had now gone as the temperature was rising, but still less than 5 degrees.  I changed my route today, and headed out along the same route I cycled the day before, the hill that was frozen was now, ice free, I headed over Crock Street towards Broadway before dropping down hill to cross the A358 to pick up the Ilminster to  Chard cycle route along the old railway line, used as the ‘stop line’ in the last war. I was looking to run 10 miles today, to keep up my stamina for the longer distance, the cycle track was quiet and again there was little or no wind, I seemed to be going well with 4 miles covered, everywhere was now very wintery looking, trees were sticks, the trail covered in leaves, everywhere was colourless, greys and black being the winter colours, after a further couple of miles  I left the trail to run round Chard Reservoir, the water looking mirror like in the grey light, ducks, moorhens etc, paddling around looking for food, it was a roller coaster run around the res, but different to usual as I normally go in the other direction. The area is a nature reserve so dogs are not allowed which is lovely, makes a nice change not to think about whether a dog is a ‘chaser’ or not. By the end of the Res I had covered 8 miles, the last couple of miles were now back up hill, I still felt to be going well keeping a reasonable pace , I got home and it was another 10.2 miles added to my total, an enjoyable run.
Wednesday and Thursday were working days, another two day Bikeability course for year 6 children in Wellington, weather forecasts for the two days were ok with light rain forecast for day two. Temperatures were now well up with 12 degrees!!! The children were excited and we had a good first day, day two started with a heavy shower but this soon cleared  and we were able to have a good day. This was my last course until March, so hopefully more chances to get out to bike and run.
Friday, another 32 mile ride , temperatures were warm! 12degrees plus, I had overdressed to day and got very hot, the roads were also very dirty, where tractors had been round the lanes, different to a month ago when I was still riding my summer bike, when I got back I had to get the hosepipe and ‘muc off ‘ out as the bike was filthy, I also noticed the bottom bracket, had a little play, so looks like new bearings soon. 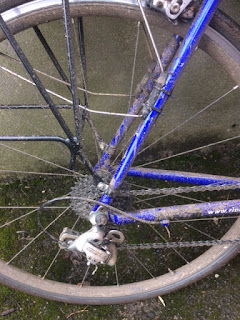 a very dirty bike from the dirty roads 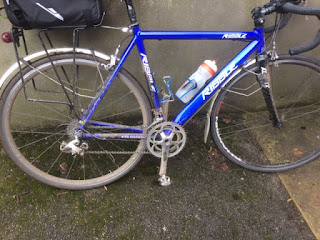 Weird weather this week, started off freezing and by the end it was 12 degrees!
Posted by IanB at 22:42