A break in the Lake District 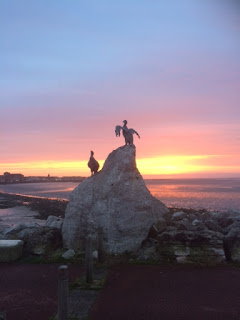 A year ago we had a phone call from our booked accommodation in the Lake District informing us that they had to cancel our booked holiday at Fallbarrow Park because they had been flooded out, that was the great storm of December 2015!
So we thought we would try again this December! This time we were successful J
So Sunday we drove up to the Lakes, calling for coffee to see our Grandchildren in Gloucester on the way. We were booked into the caravan on the Monday, so we had to stay Sunday night elsewhere, we chose Morecambe Travel Lodge so we could enjoy the fantastic scenery of Morecambe Bay.
The M5 was very busy as usual, with loads of road works, bringing the speed down to 50mph max at times. At least there were no accidents etc., it still took us 6 hours!
Once checked in the hotel, we walked out onto the front, to see a spectacular sunset over the Bay, the ‘Tern project’ sculptures silhouetted against the setting sun. 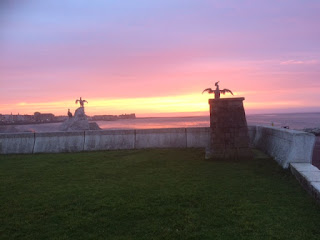 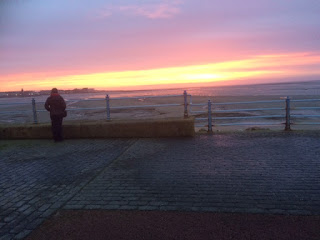 We followed this with a visit to the ‘Eric Morecambe’ Weatherspoon’s pub for something to eat; this is where the disappointment with WS begins. We noticed they had a nice veggie Wellington on their xmas menu, so went to order, none left! Okay we will have the spicy burger with cranberry sauce, sorry no cranberry sauce! So we settled on veggie burger and chips! Let’s have some afters with a coffee, oooh! Look, mince pie or Christmas muffin, sorry sir! Only 1 mince pie left and no muffins!!!! So half a mince pie it was to finish off, at least the coffee was hot.
After a good night in the hotel we drove on to Bowness visiting Grange for a walk, even though it was pouring rain.
A visit to Booths the supermarket in Windermere for some extra groceries before finally arriving at ‘Fallbarrow’ at Bowness.
The caravan was the usual very high standard, lovely and warm, the site was very quiet. After a nice cup of tea and chocolate digestives a walk down to the ferries by the Lake before it got too dark. The mist was now starting to form across the lake giving an eerie effect as it was just above the lake surface.
Tuesday the weather forecast was poor, with heavy rain, but! It wasn’t too bad, but we stayed local and walked around Bowness and down to the ferry that crosses to the road leading to Beatrix Potters house, again the mist produced some magical views across the lake. 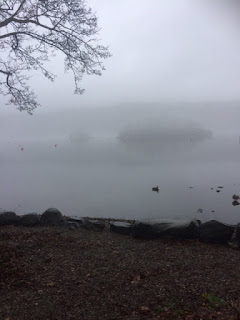 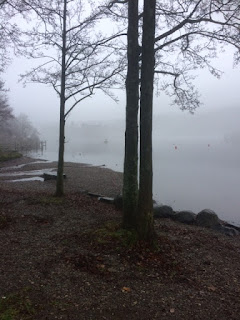 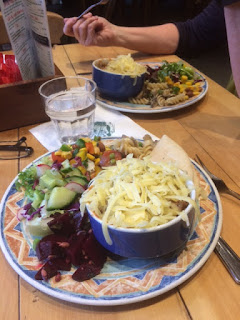 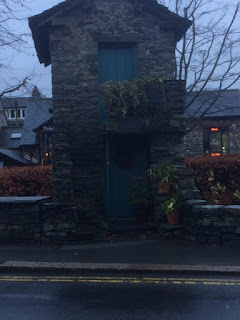 House on the Bridge in Ambleside 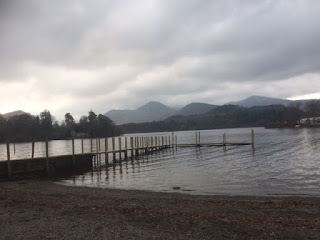 A real winters view, with greys and blues, the trees now stripped of leaves, leaving there black limbs stretching into the sky. There was even some sunshine poking through at times. The town was very Christmassy but there were lots of Japanese/Chinese tourists, photographing everything and everyone in sight!
Lunch was at ‘Wilfs’ in Staveley the best café in the country, his veggie chilli, always hits the spot!!! Followed by caramel shortbread and tiffin! Ambleside was the next port of call, their Christmas lights, very beautiful. A quick visit round the various climbing shops, all full of the same kit at the same price! No bargains to be had. A late afternoon run around Bowness and Windermere in the ever increasing gloom of the oncoming evening, though very warm. My head torch was useful at times, 6 miles covered.
Wednesdays forecast was better so a walk over Grasmere way was planned, parking at Rydal Hall, unfortunately the parking had been withdrawn so we had to find parking elsewhere. We parked at Whitemoss and followed the coffin road over to Rydal Hall tearooms for coffee, a shocking £2:75 for a Latte, no scones!!! So shortbread instead. 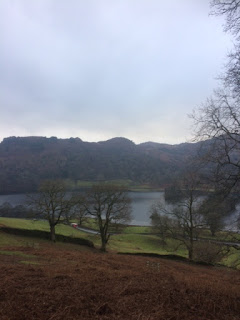 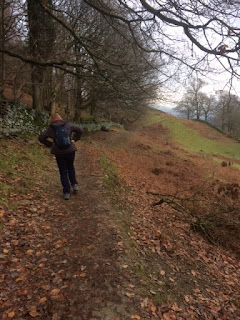 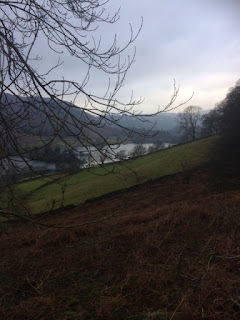 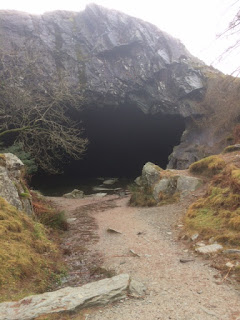 We continued our walk round Rydal Water via the Caves which are always impressive. The day was dark, damp and misty, but warm. The views were lovely, there were even signs of patches of snow on the higher peaks we could see and we saw very few other people. We saved lunch until we got back to the car, so a late lunch of cheese and pickle sandwiches!
Thursday was Keswick day, we drove over the newly repaired A591, badly damaged in last winter’s storms, closing it for a long time. Coffee and scones in Booths supermarket before a visit to the climbing shops, I even purchased a new cycling jacket, a Paramo Ciclo waterproof, I am a fan of Paramo as I think it works for me better than Goretex and can be reproofed.
Wetherspoons curry was lunch, in the old law courts complete with cells! 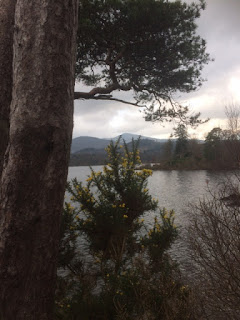 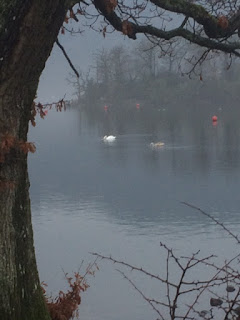 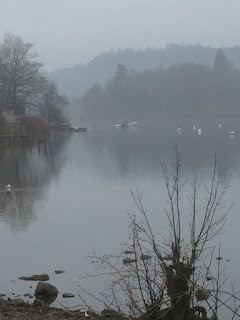 Afternoon was spent along the shores of the Lake, looking very peaceful in the grey winter light, Catbells dominating the skyline. It was very quiet with few people around. An evening in with Mulled wine and salted peanuts, but I did manage another 6 mile run before tea again.
Friday we were due to drive down to Lancaster and stay overnight before the long trek back home, calling again to see the grandchildren. We were up early, tidied the van and then loaded up the car, there seemed a lot more to pack in than when we came up! We had a last walk down to the lake, it was beautiful and peaceful, ducks and swans upended searching for their breakfast, and a low mist hung over the lake, time to depart once again.  We dropped the key off at reception and then headed for Wilfs for a breakfast, pot of tea and a double egg butty with brown sauce, lovely!!! We fully recommend Wilfs in the yard at Staveley near the bike shop.
We drove to Lancaster down the back scenic route, hitting Lancaster just before lunch; the traffic was horrendous as we tried to find the hotel and a car park close to it!! But the one close to it was full so parking at that time was at least a quarter of a mile away, a downside of a Travel Lodge in a city centre. We had a wander round the very busy city, eating a sandwich in front of Queen Victoria near the impressive building that was the council offices. We had had enough of the busy town so decided to escape to the coast once again and a pleasant walk along the front once again at Morecambe. By the time we returned back to the hotel we were able to park in the car park outside the hotel, phew!!! That’s saved some work carrying our bags. A cup of tea and a rest before it was time once again to find somewhere for tea [or if you prefer dinner! This is where we were utterly amazed, it was six o clock the town was heaving with party goers, most pubs and restaurant very full and most advertising ‘no food after 5pm due to parties’ so it was a visit to Sainsbury’s for a sandwich, crisps and cake, an evening back in the hotel rather than a night on the town.
Saturday we were off by 7 am to try to avoid traffic, which went fine until junct 14 on the M6 they had closed the motorway because of an accident, fortunately we were only stopped for 20 minutes, the rest of the journey went without incident but it was a good four hours before we saw the grandchildren once again, we had a pleasant afternoon, playing with them all before our final last bit of the journey another hour and a half. We were glad to arrive home, tired and hungry, a trip to the chip shop filled the gap!


It had been a lovely week away once again, the weather had not been too good, but it was very warm and lovely and quiet around the lakes, it’s just the journey these days, far too busy on the M5/M6 it would be nice to go again next Christmas.
Posted by IanB at 06:04