Back home and back to running and cycling


Sunday was a bright day compared with what we had in the lakes, after a lazy morning, sorting etc. I spent the afternoon working towards my 3000 miles on the bike for the year; I am only 86 miles short.
It was good to be out on the bike again, the Garmin said it was 4 degrees, but there was no wind. A ride round Hatch Beauchamp and Ilton gave me 26 miles towards my target for the year.
M was off to London on Monday for a few days with our daughter, so I took them to Taunton to catch the Berry’s coach. I waved them off and then headed home to prepare for a nice run down the coast. I took the van and headed for Beer Head car park which was strangely quiet, no other cars were parked up. I kitted up, locked the van and set off down the coast path, towards Beer Head, the weather was warm, and the sun was trying to come out from the clouds. The paths were muddy but not too much to make it uncomfortable. I ran over to Branscombe , not seeing anyone, the views over the sea were and towards Sidmouth were stunning as usual, the descent down to Branscombe I met a couple walking up, greetings were exchanged as I worked my way down the path, arms ‘flailing’ to keep my balance. I was soon down by the now closed café, and started my climb up the other side; new steps had been put in place by the National Trust which meant I now had to pick my feet up so I did ten steps up on each leg, before swapping to relieve the pain! I was soon on the ridge, quite muddy in places, the trees had now lost their leaves so it was good to look across the village of Branscombe, and you seem to gain a lot of height quite quickly. The final field before dropping down past the Fountains Inn was very muddy, churned by the cattle normally there, but! It was good to see they weren’t there today; I don’t like crossing fields with cattle in them, especially when they have youngsters with them. I hit the road and had a pleasant run down to the village, helped because the road was closed as one of the houses was having a new Thatch and scaffolding was out into the road.
I ran down to the beach once again before climbing up to the undercliff path, this was a really pleasant and quite warm, sheltered from the wind, the path is really good to run, single track, in and out round rocks and up and down, never really getting to close to the beach. It was soon time for the ‘stairway to heaven’ and as usual, I walked, I heard voices as I neared the top, to find several people sat on the seat, as I approached they did offer to move up and leave space for me to rest, I declined their offer and continued over the top. It was a steady run back to the car, the views over Seaton making it look quite Mediterranean from a distance with the curve of the bay and a couple of high rise blocks of flats. Soon back to the van, still the only car in the car park, change of clothes and then coffee and flapjack looking over the bay, - living the dream!!!! 6.80 miles and 1000ft plus climbed. 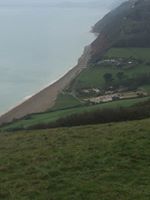 looking down on Branscombe 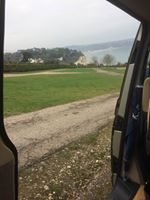 View from the Van at Beer Head car park ,over Seaton whilst drinking my coffee - living the dream!!

Tuesday I did another 26 miles on my bike same route as Sunday! Getting me closer to my 3000 k target for the year.
Thursday after a supershop round Tesco first thing seemingly stocking up enough food etc. to last till July, or at least get us through the Christmas break with our family visitors over Christmas, late afternoon I managed a 5.1 mile round town on a chilly afternoon, legs felt quite heavy today, not sure why??
Friday we took the Van down to Seaton, to have a coffee on the front before storm ‘Barbara’ comes in after lunch. The sea was already rough, and clouds were scudding across the sky, seemingly getting darker and thicker as we walked out along the front. There were a few people out, all well wrapped up against the wind and the fine drizzle.


Christmas eve tomorrow! Lets hope the storm goes through quickly with the least damage caused!
Posted by IanB at 06:06