Quantocks, twins and a good week

A great day in Gloucester with our new grandsons and the granddaughter, a pleasant lunch followed by a lovely walk in beautiful warm sunny weather to Barnwood Arboretum. The trees are now starting to show the autumn with conkers on the ground and yellowing of leaves, it also shows with the traffic on the M5, which has reduced considerably.


I decided I needed to get a longer run in, but not wanting to spend the time running round the roads of the town I voted for the Quantocks, which is where I did my training for the Ex to Ax and seemed to fit quite well, some ups, some downs with a good ‘forgiving surface’ along with great views.


I was up at 5:30 after preparing my kit the night before, some marzipan balls, hat, gloves, windproof, phone etc. all into the bum bag along with 500ml of ISO star, a change of clothes and towel and I was ready to get up and go, after a breakfast of muesli and banana.


I was out of the door by 6:15 and the road to Taunton was very quiet but a thick mist hung around and quite dense in places that was until I started to climb out of Taunton through Kingston St Mary arriving at Lydeard Hill car park at 6:45 to glorious sunshine with a sea of mist in the valleys, it was like standing on an island.


I was surprised to see several cars there already, a Shimano service vehicle was there with occupants sleeping in the back!! And several others, I assume dog walkers. 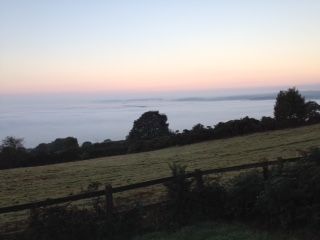 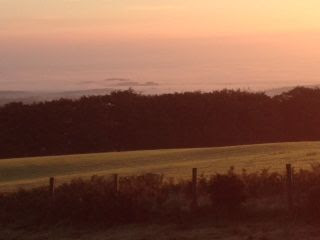 East peaks poking above the mist 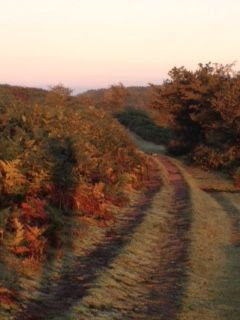 Track around Lydeard Hill 7:00 am

Video on my phone  [doesn't seem to work on ipad?]
I kitted up and set my watch, Paramo vest, Ron Hill 3/4 tights, PHD merino wool socks [brilliant socks] and my Salamon Fell Raiser shoes. Just as I was leaving the car park [at 7:00 am]  another van drew up, unloading 3 very boisterous dogs, a young lad ready for MTBing and dad dressed to run. No time to chat as I headed of on my usual route round Lydyeard hill in glorious sunshine, and as I got towards the edge of the Quantocks the valleys were covered in a sea of mist, to good an opportunity not to take a photo [more of this later!!!!!] I ran around and through the woods I think called Bagborough plantation and on up Wills Neck [386 mts] I felt ok and made good time on the climb. 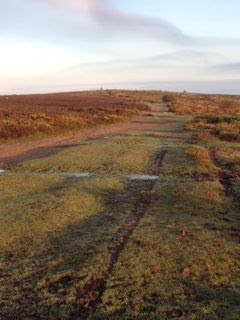 Wills Neck in the distance
A quick video of the surrounding country side [cant upload it though!!]and a few photos and off down the other side to Triscombe Stone, it’s a pleasant undulating run from here along to Crowcombe park gate, the sunshine dappling through the trees, no other people about despite the parked cars. It was also good underfoot with little mud. I made a good pace along the Drove to CPG before turning uphill once more across the fields climbing parallel to the road to Dead Womans Ditch,[314 mts]  about 4.5 miles covered, I had 3 of my marzipan balls and a slurp of ISO drink to stave off energy loss later!!!! 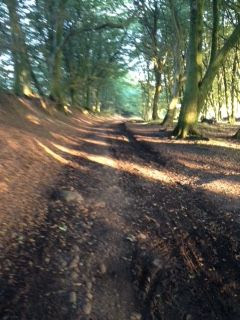 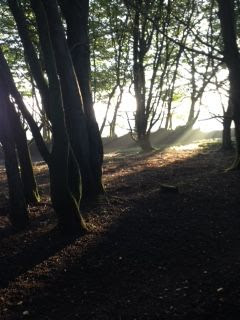 I crossed the road and headed past Robin Uprights Hill and followed a main track over to Halsway Post. The temperature was just right for running, the grass was very wet with early morning dew, it must have been chilly up here last night, sadly I didn’t see any deer this morning, you can sometimes surprise them early in the morning especially on this stretch before they escape down the Combes.
Selfie near Dead Womans Ditch


I was still feeling good when I got to Halsway Post which has great views over towards Exmoor as opposed to where I had come from which looks over Hinckly point but also towards Glastonbury Tor. Another slurp, few photos and off again, approximately 6 miles covered, not at a great time but, I had stopped several times for photo opportunities.
Halsway Post away from the sun and into the sun


A climb over the style before ascending Hurley Beacon  and over to the summit trig point above Crowcombe Park Gate at 358 mts. 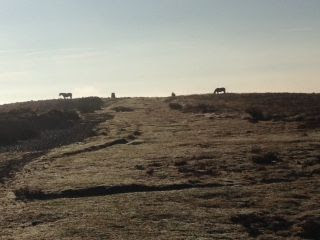 Trig point above Crowcombe Park Gate, horses grazing in the morning sunshine
No cars in the park here, but a lovely run down the hill to cross the road and start on my return run back towards Wills Neck etc. My legs felt ok, no hamstring problems, no calf issues feeling quite good, breathing ok and the HRM seemed to be hovering around the 130 mark [my max at the finish was on 154 and average of 132] so felt this was good, I was trying to keep it down but! At the same time put in the effort. I hit the climb back up to Wills neck and disturbed some ponies as I headed towards the summit, 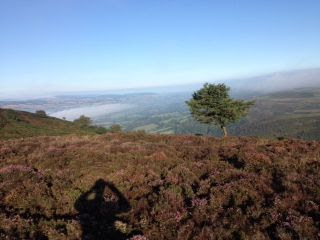 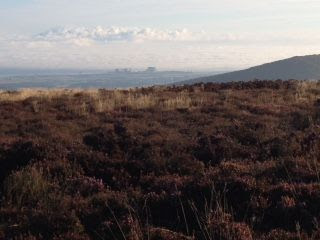 I say disturbed, but the completely ignored me! Wills Neck for the second time before a nice run down through the woods before the run back around Lydeard Hill. It’s usually at the Lydeard hill point I am starting to get very tired [9 mile mark] but today I felt good and ran quite happily back to the car park, I think I had only seen one person actually out on the hill, during my 2 hour run. The cp was quite busy now but no people, the Shimano gang were cooking up breakfast with bacon smells drifting my way. The sun still shone and was a glorious morning. The MTB lad, dogs and running dad arrived back just after I finished, I had no idea where they had been. I changed my top, had Nature Valley peanut protein bar, some more water before driving off home.


As I got towards Taunton I had the horrid feeling that I may have lost my credit card whilst out on the hill!!!! I put the card with my phone and when I took my phone out must have pulled the card out. Sharp braking and pulled over to check! Nope! No sign of the card. It was too late to go back and it could have been anywhere across the Quantocks, so a quick drive home to report my card lost, feeling a complete ‘plonker’ I only took it in case I needed fuel, it’s a good job I didn’t! I have learnt a lesson, do not put your card in with your phone!!!


The rest of the day the weather stayed warm and sunny, enabling tea drinking outside, a little light garden work and walk to B&Q for weedkiller for the paths.


So it was a nice finish to a great week with 18 miles covered running in the week [3 runs], two spinning sessions and a couple of cycle rides mounting to 92 miles cycled plus of course the 10.32 miles on the Quantocks yesterday. I did try running and following this with my spinning session, I am sure it did some good with the spin session taking away the soreness/stiffness of running, and I am sure it must be helping with endurance.


The weather has changed once more, with this morning being wet and cold, still that’s autumn!


With a Bikeability course on Wednesday and Thursday this week I hope it all clears.
Posted by IanB at 03:50