A trip to Deauville, France and a 17.4 mile run

What a week, its amazing what you can do in a week!
Last Sunday saw us driving to my sons near Wimborne to stay the night to catch the early Ferry from to on Monday morning, for a 4 day break in in Normandy France, this was a 3 night Brittany Ferries break, so Mrs B had the pleasure of a hotel rather than the Campervan for 3 nights.
We arrived at the Port at 7 am ready for departure at 8:15, I was partly expecting to be the only car in the port given it was a cold, mid -March Monday  morning, who the heck goes to then, apparently loads of people as we were way down the queue of cars!! Anyway we boarded and as always went straight up to the lounge to ensure we weren’t standing up all the way to ! But for once it was quiet, I am not sure where all the people went, but they weren’t in our lounge?? The ferry left 15 minutes late, due to a medical emergency! We didn’t find out what that was, as long as it wasn’t the captain found drunk at the wheel, or I suppose some poor soul will be glad they were ill this side of the channel.  As we finally set sail we managed to find the self service restaurant, serving breakfast, as we don’t eat meat or fish we had the veggie option with a coffee, nice but very luke warm. At least it staved off hunger for a few hours as it’s a five and half hour sail across to , we tried the restaurant again for lunch, and had luke warm Tagliatelle with Ratatouille,  I am not quite sure why they have trouble having hot food, hot plates would help.
The ship made up time and we duly arrived in Caen at 3:15 French time, the port seemed in the middle of nowhere, out on a sandspit, so it was straight out on to a ring road round Caen, before ending up on a motorway [we didn’t intend to but missed the turning] that we had to pay to get off again, it was a good job we had a few Euros loose change from our last trip. 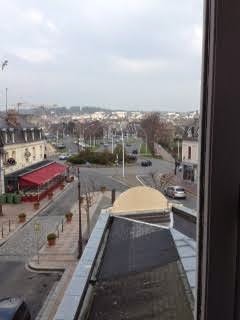 View from our room towards Trouville 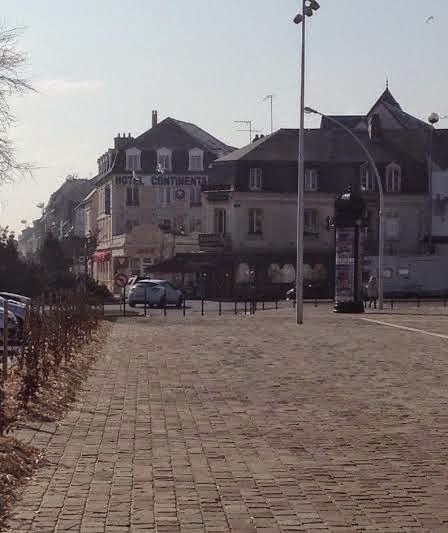 We arrived outside our Hotel in , having paid to park in the road only to be told as we were opposite the Police station it was free!!  A very nice room with dual aspect views of the town, the reception spoke very good English although Mrs B did very well with her French whilst I hid  behind her, in case I was asked something in French [not my strong point, in fact I am hopeless!!!].
We had a quick cuppa using our travel kettle and mugs from home before going out to explore the town, what was nice was the hour they are ahead of us meant it stayed light until 7:30 8 :00 ish.
The town of Deauville was the place to be in the 20s’ and today its well known for its big Casinos and designer shops, but this didn’t interest us, the houses were wonderful and the sea front has the ‘boardwalk’ 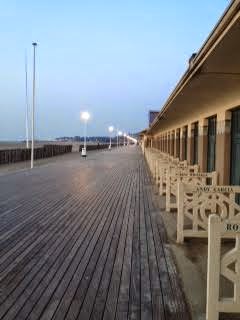 The Famous Boardwalk with the Film stars names 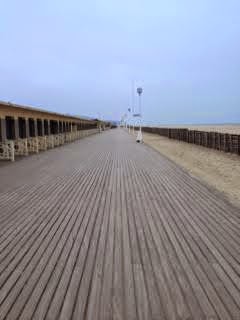 The Boardwalk on my early morning run

and bathing huts which date back to 1924, the beach here is massive and the sand wonderful, it’s a lovely walk along the boardwalk . Next door to is they are separated by a river and a lovely harbour, the housing is again lovely typical French. We spent the three days wandering about and . The weather was beautiful, with people out sunbathing, when out of the wind. It was quite busy for mid march. I did manage a couple of runs over the four days, I ran out along the front as far as possible before descending down back to the beach for a lovely 3 mile run back along the beach on firm san 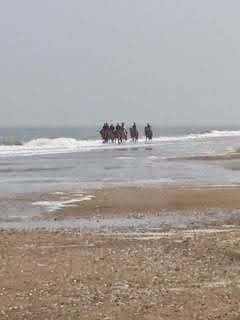 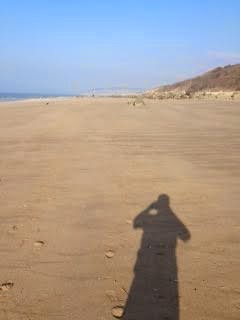 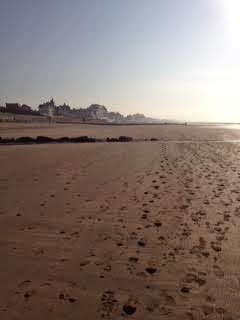 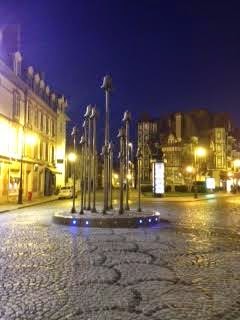 The bells island in the middle of Deauville

sharing at times with some hrse riders out for a gallop along the sea edge, 6.29 miles covered. I was also up early on our final morning for a 3 mile run along the front, a very chilly morning.
Our final morning before catching the ferry back was a trip to Honflur, a lovely town with some very old buildings in the middle and a harbour surrounded by five or six storey typical French housing with cobbled streets,  very busy with tourists, very cold that day and very grey.
The drive back along the coast to took us through , famous from the war. The roads were lovely and quiet and we arrived back at the ferry in good time, again expecting to be the only car in the car park!!! no chance! Where have all these people been???? This time we had taken our own food for the journey home, disappointing as the food was on the way out. We finally arrived back in England at 9:15, it took ages to get off the ferry as we seemed to be on a level that had to wait for all the other traffic to get off, then we had to queue to get through passport, BUT! The checks for illegal immigrants didn’t seem very thorough, lorries were driving straight out with no checks as were all the cars and  vans?? The Ferry docks at Portsmouth

The drama continued as we were diverted from the A31 because of road works shutting the road, last thing we want at 11 pm at night, as we went down the detour a deer jumped out of the undergrowth, I couldn’t avoid it  and hit it squarely on the front, it was killed outright and fortunately was knocked across the road off the highway, even more surprising there was a police car coming in the other direction, we stopped and checked the car, fortunately a cracked plastic grill was the only damage, we were very lucky, but not so lucky for the deer. The police were very good and they sorted it out as we went on our way, much shaken and taking it steady for the rest of the way home. A lovely few days away, sadly the incident cast a shadow on it all.
Saturday saw us taking the van out for a run down to Exmouth in beautiful sunshine.
Sunday had me doing my final long run before the Ex to Ax run next week. I was on the Quantocks by 7 am again, and again it was a very cold grey day, but at least there wasn’t any wind, I set off on the same route as before but intended to extend the mileage. I took a bum bag this time. I felt ok and didn’t have the same difficulties as last time; I managed 17.4 miles so pleased with that. Legs felt ok, except for my left hamstring which I looked up and I seem to have ‘hamstring tendonitis which they say you have to rest, it is just a nagging pain in my bum! If I can get through this week, its back to biking, this should be better for it.
So its been a very busy week, and I managed to get a few miles running to help me decide whether to run next weekend, I should be on the start line, weather permitting!!