few days in the Lakes and flu has flown!!!!

Sunday saw us heading north on the M5 calling at Gloucester on the way for coffee with GD. For once it was a painless journey despite the numerous roadworks. we arrived in Morcambe late afternoon, checking into the Travel Lodge before having a walk along the front. Morcambe has to have one of the most stunning sea front views in Britain with views over the sands to the Lake District. We were fortunate to capture the setting sun. 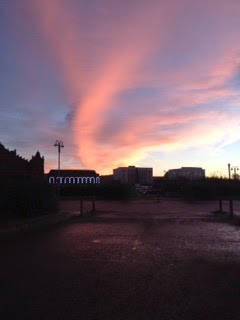 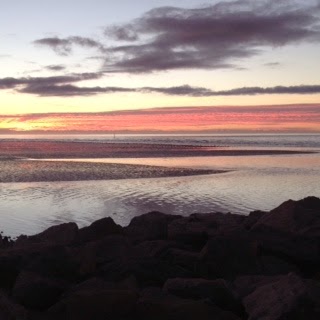 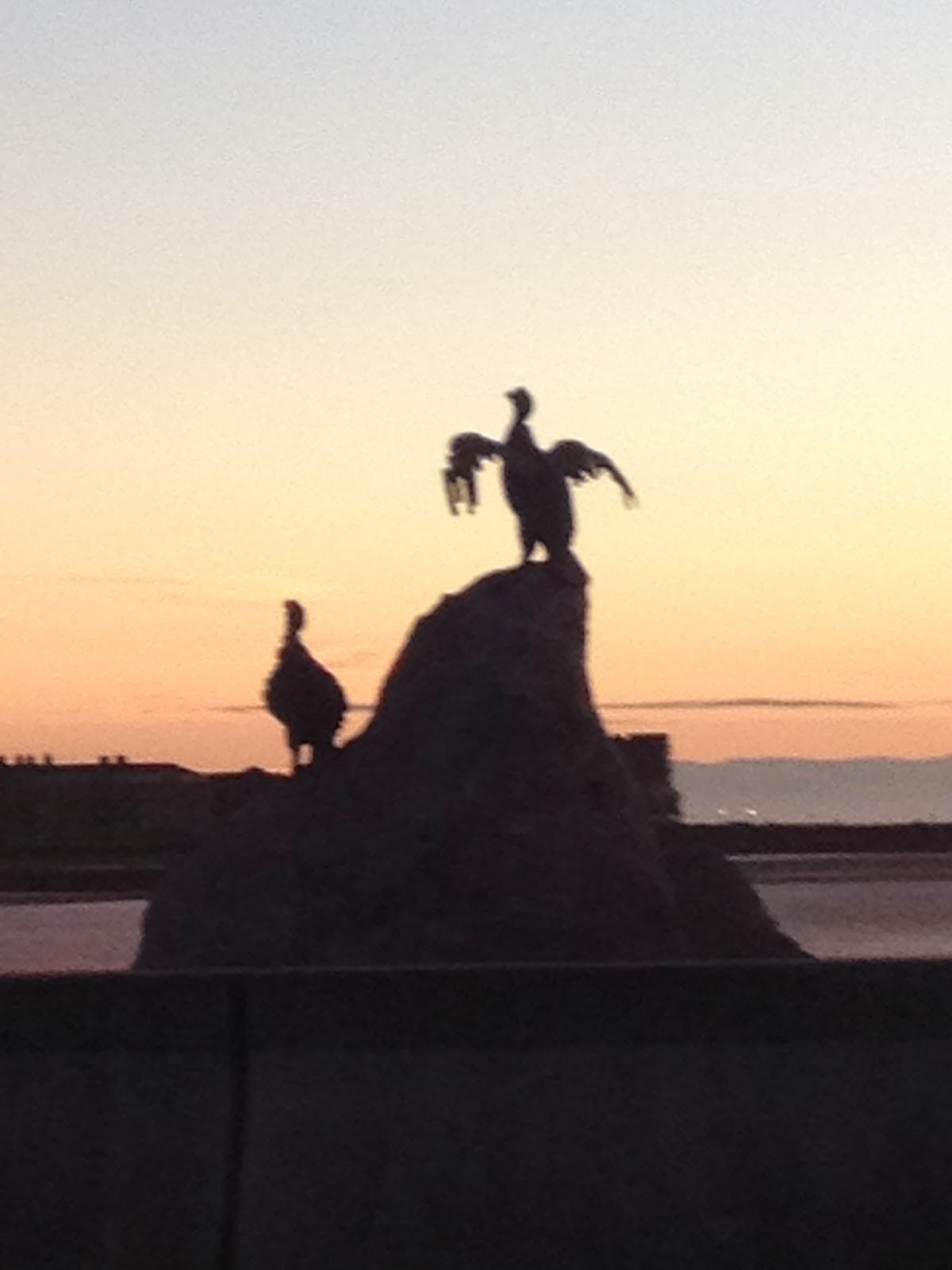 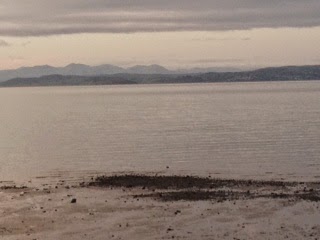 View across the bay to the Lake district 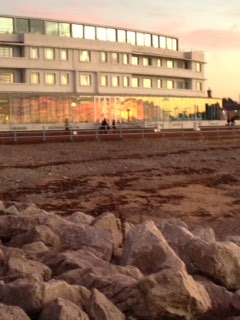 It was then off to Wetherspoons for some tea! burger and chips !!! lovely in the aptley named 'Eric Morcambe ' pub

Monday it was time to move on up to the Lakes but we had a mooch round Lancaster first, a very well off city in contrast to the run down state of Morcambe. Some nice parts, with development blending old and new. A little christmas shopping was also done!!

We then drove up through Carnforth etc. to our pre-booked  centrally heated caravan at 'FallBarrow Park' at Bowness, the drive up was really pleasant, very little traffic compared to the M5 or even driving round there in the summer, managed to spot a speed camera in time as well, phew!!!
After a nice mug of tea with cake we went for a walk down by the lake, beautiful as always, very few people around, just before it got dark, the swans, geese and ducks still pestering visitors for food, the usual squarking and fighting amongst themselves. The weather forecast for the week was good, and Tuesday promised sunshine, with a chilly breeze.

I was up before dawn, deciding to resume my running. Several layers, hat and gloves, ipod plugged in I stepped out of the caravan to a dark cold morning. I switched on my head torch as the park was still dark and I didnt want to become a casualty within yards of the van!!! I ran down through the park to the Nab ferry before returning in a round about route, the ducks and swans were still asleep, headds resting on their backs, the beam of my headtorch picking out boats moored on the lake, a very dark liquid looking very cold. But it was lovely the sky was starting to ighten and showed a blue tinge on the horizon - I covered 2.5 miles and felt good, back for a shower and some breakfast.
They were right, it was a beautiful morning, so quickly packed a rucsack, wrapped up and drove to park at Rydal Mount for a walk around Rydal water. Despite being early there were already cars parked and we headed up to the caves above Rydal water, before heading in the Grasmere/Loughrigg terrace direction finally dropping back down to the main road and climbing back up to 'White Moss Common' before following the 'coffin route' bridleway back to Rydal, views across Rydal water were stunning, the stone walls casting shadows from the sunshine which was very low in the sky and black sticks of the leafless trees standing out against the very green grass, bespeckled with sheep grazing.It was a  welcome lunch at the splendid tea rooms at Rydal Hall, a 'retreat centre' it was lovely soup with chunky wholemeal bread, no cake this time though!!! 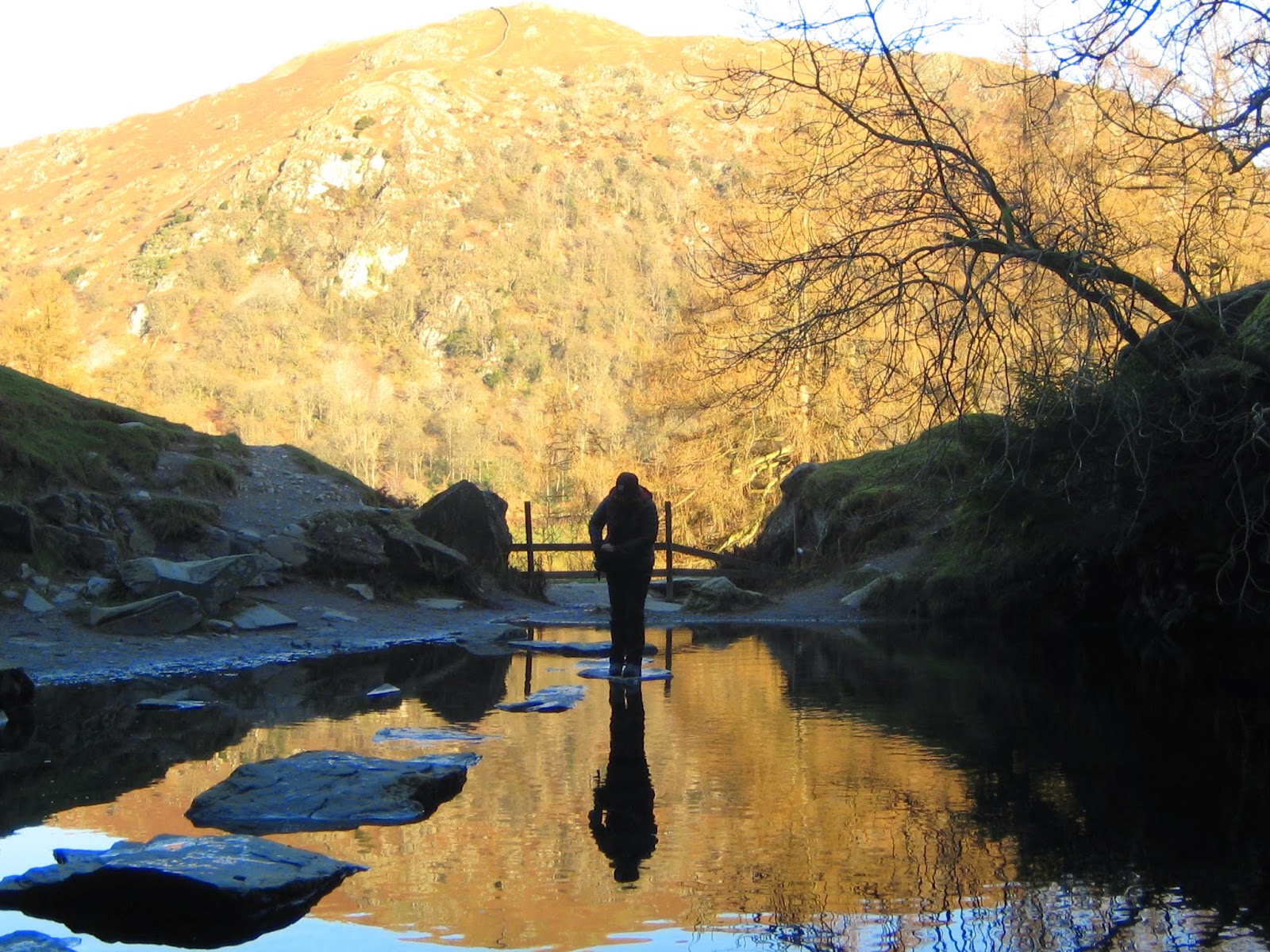 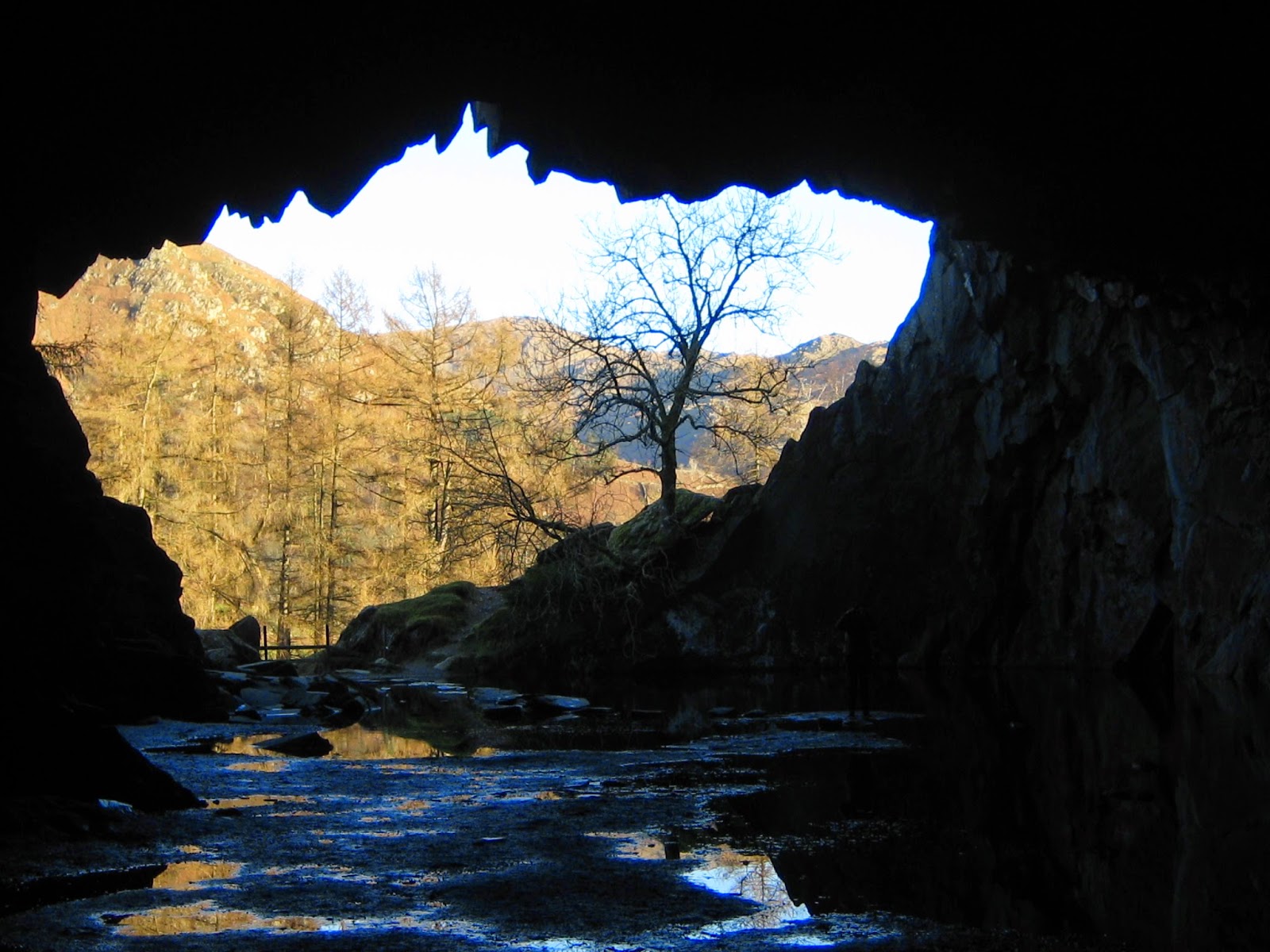 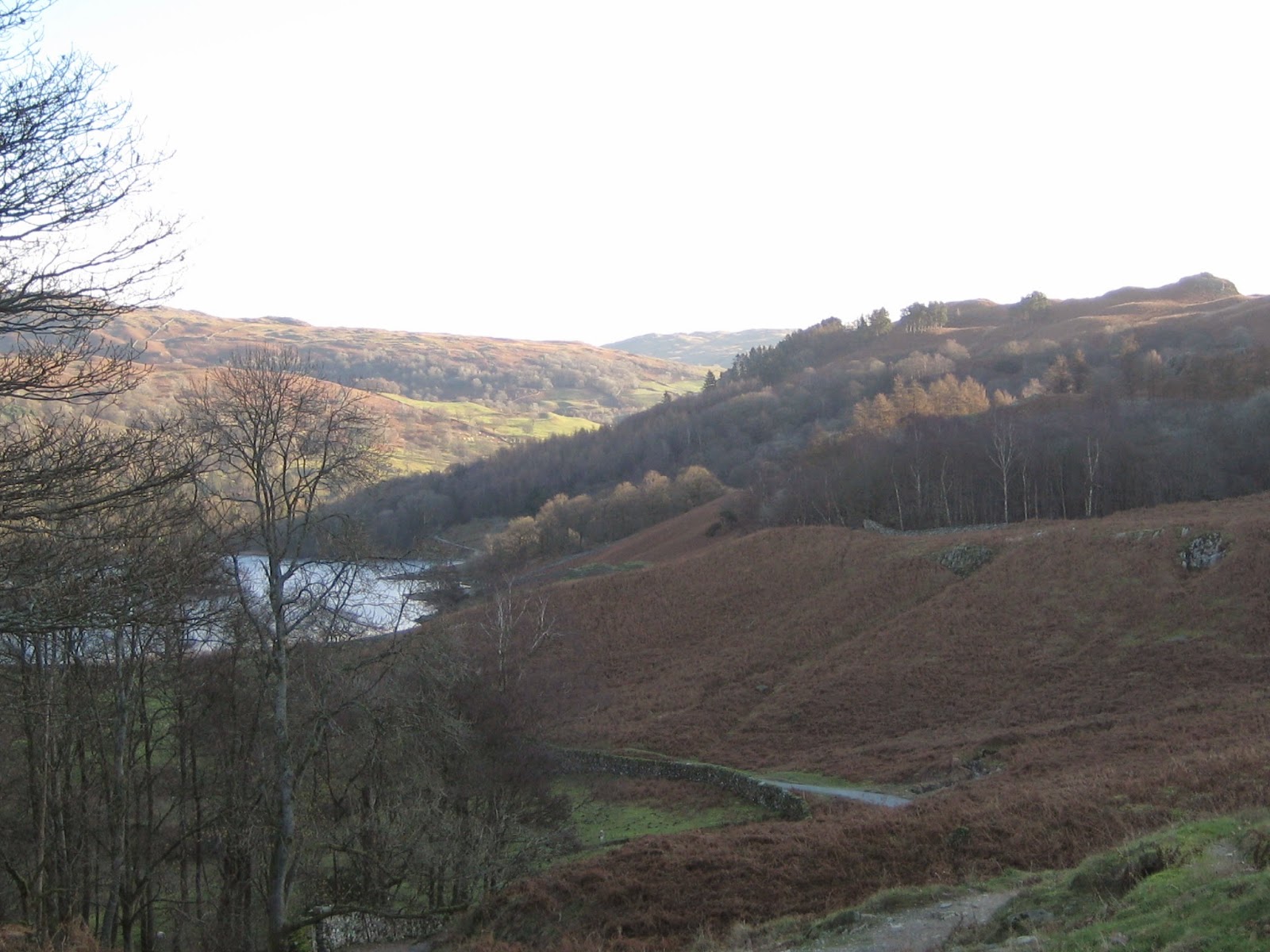 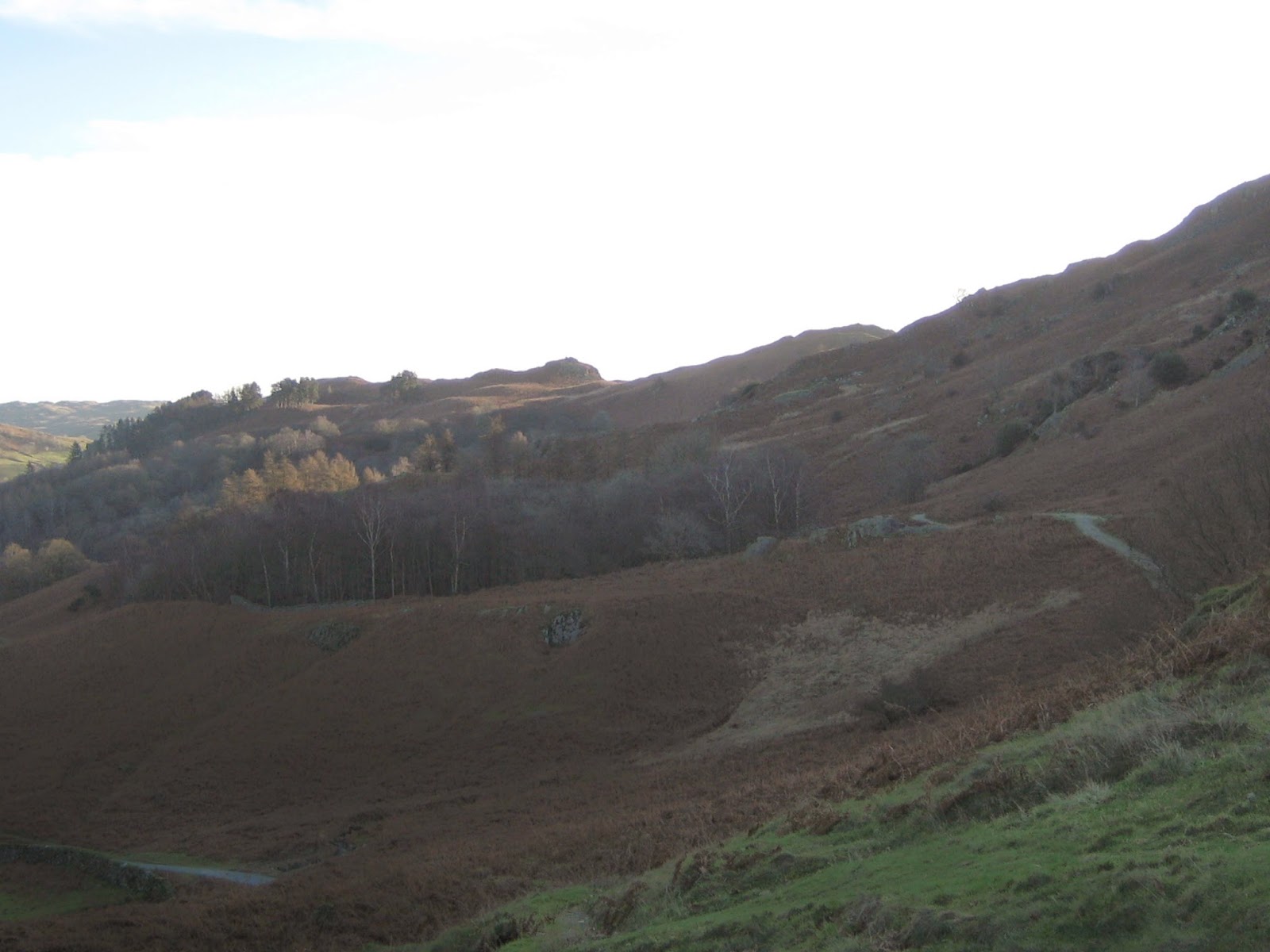 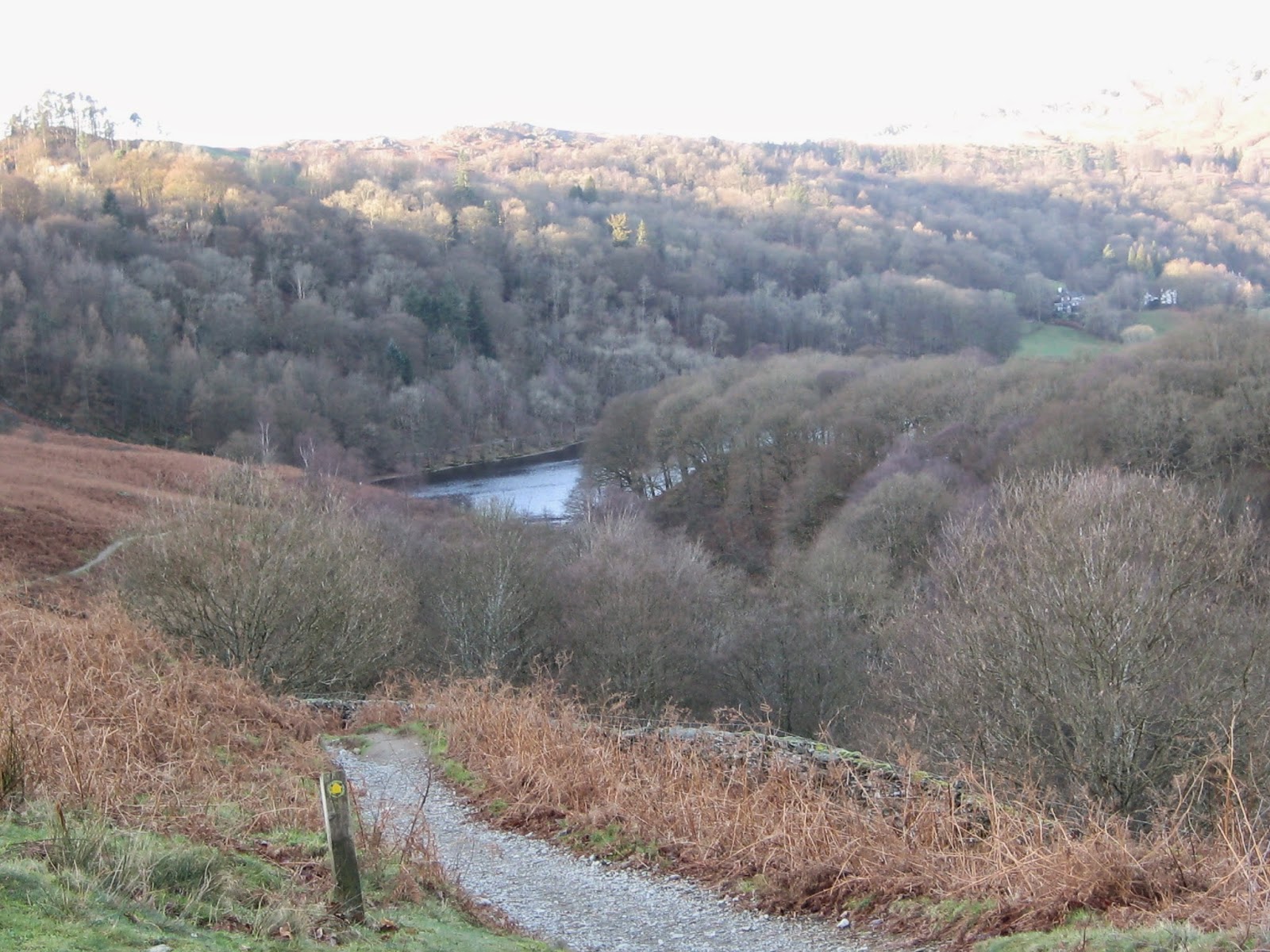 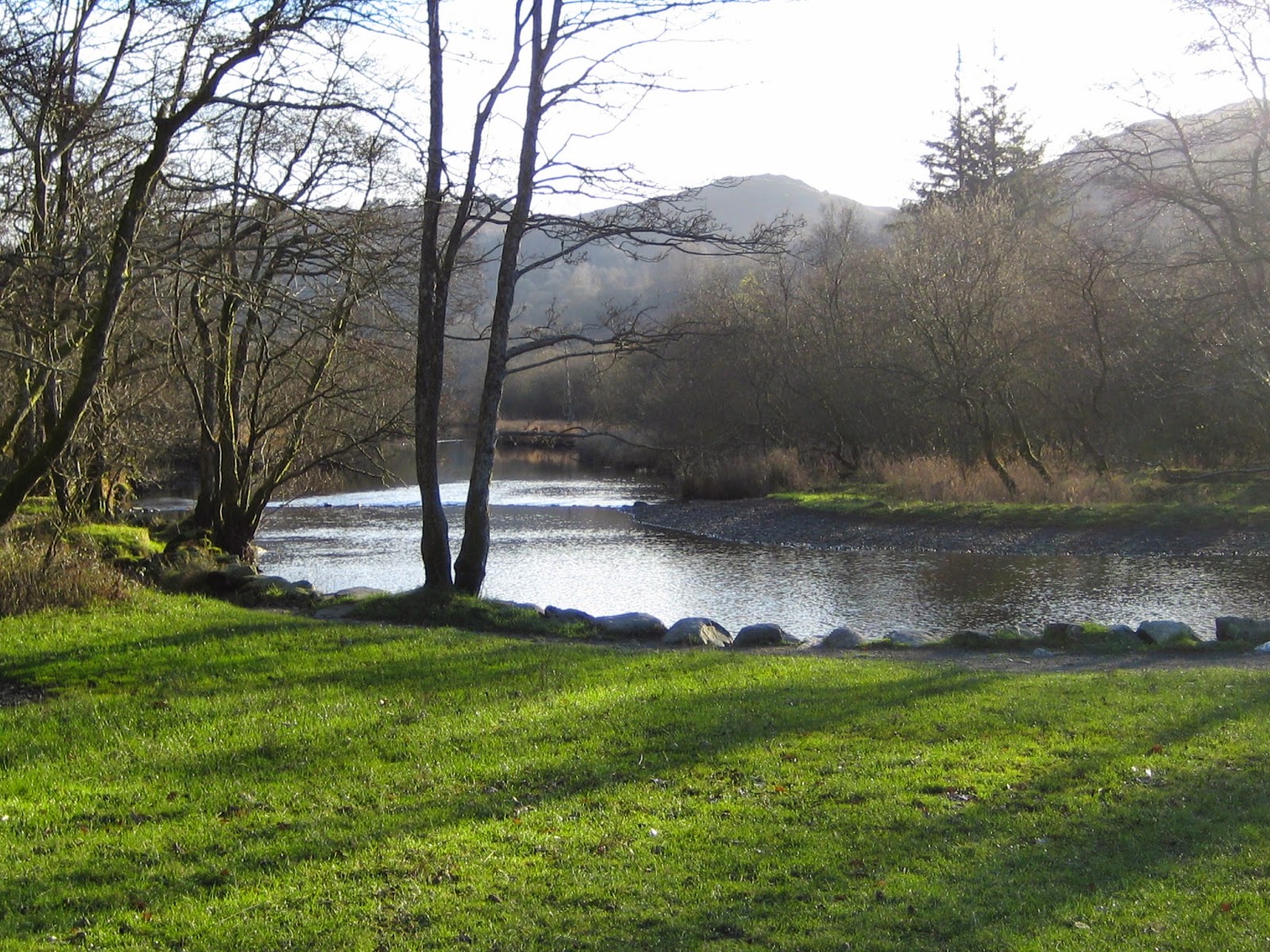 down from Loughrigg towards A591 road 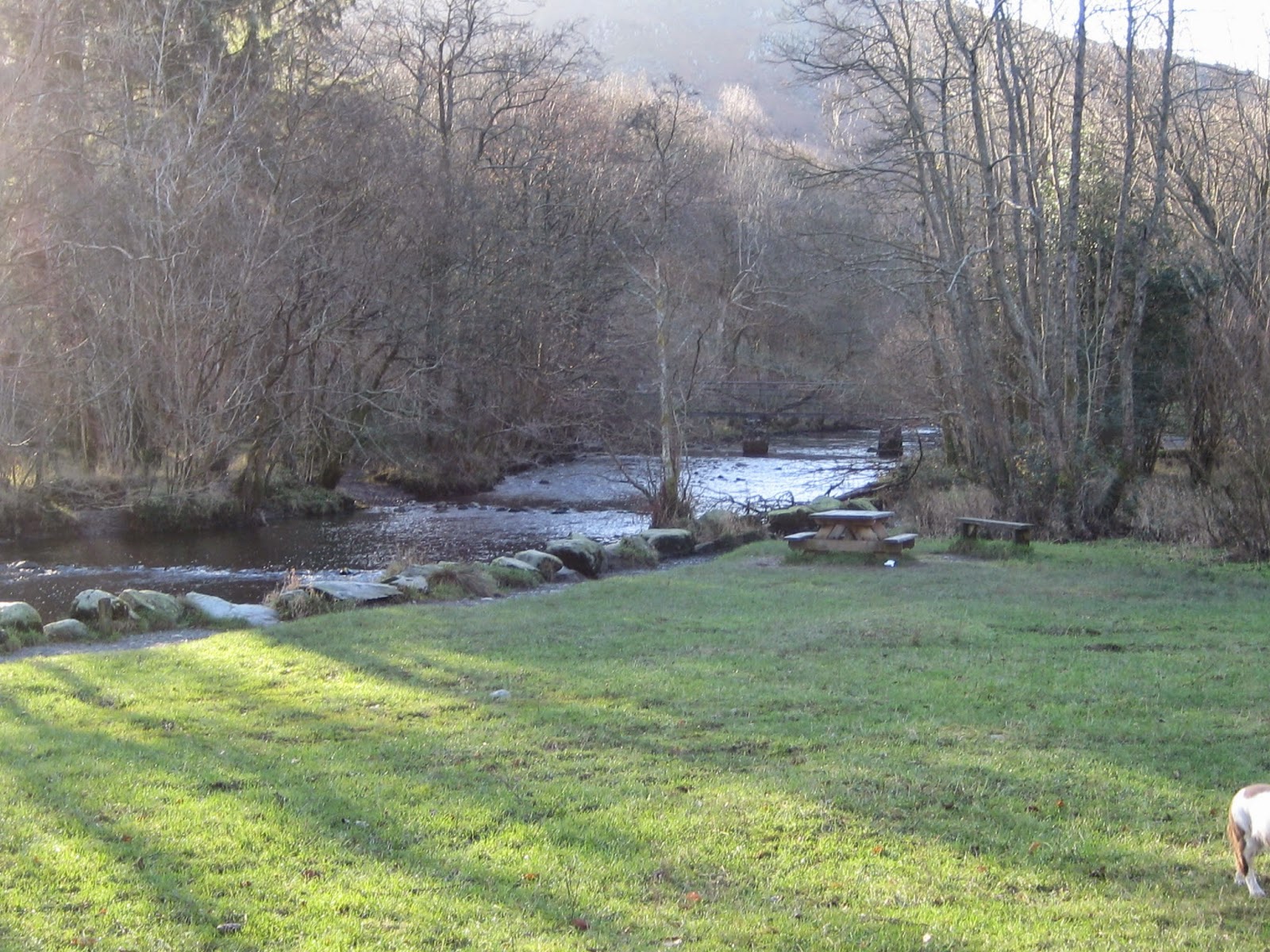 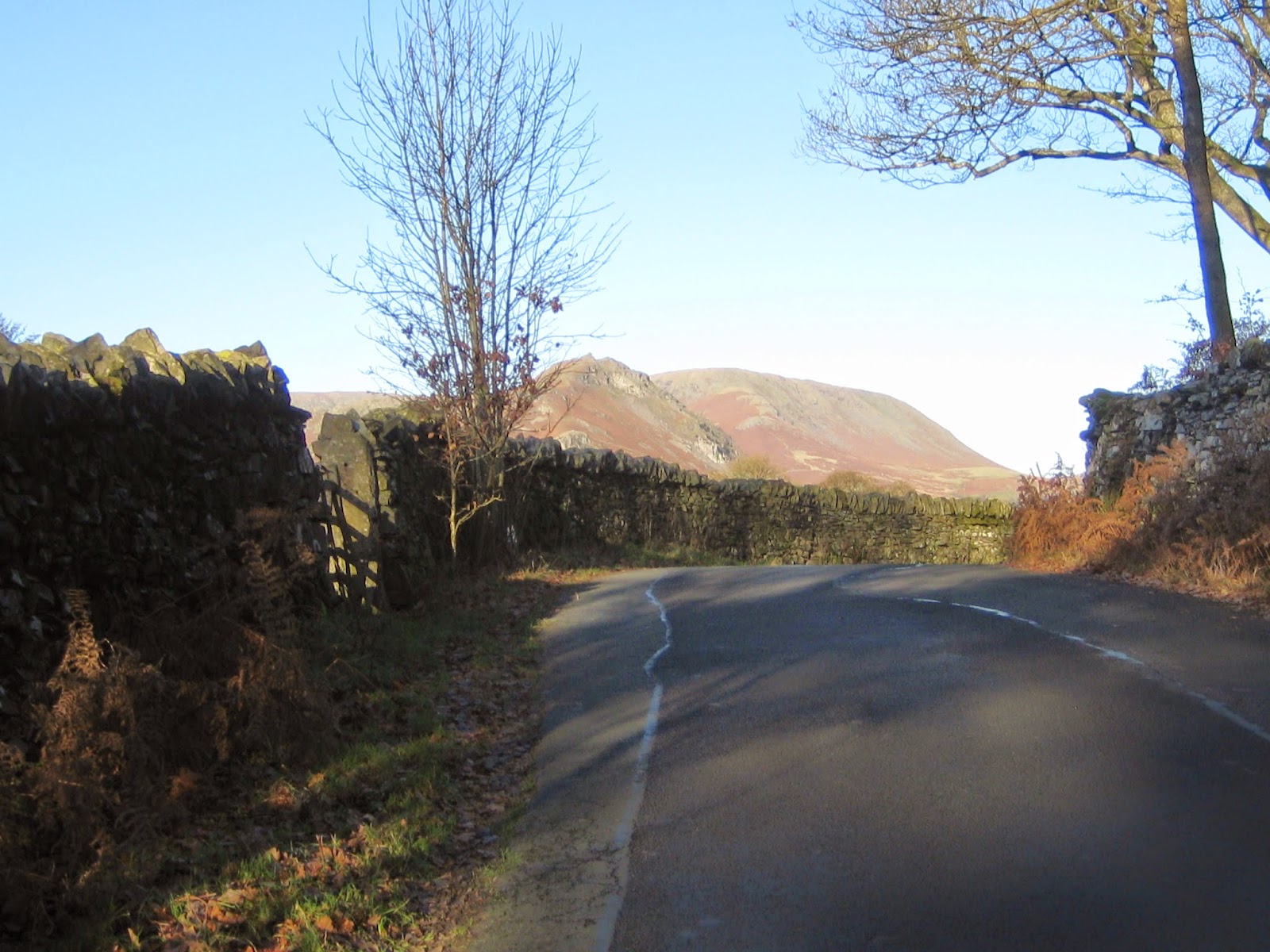 Road up towards White moss 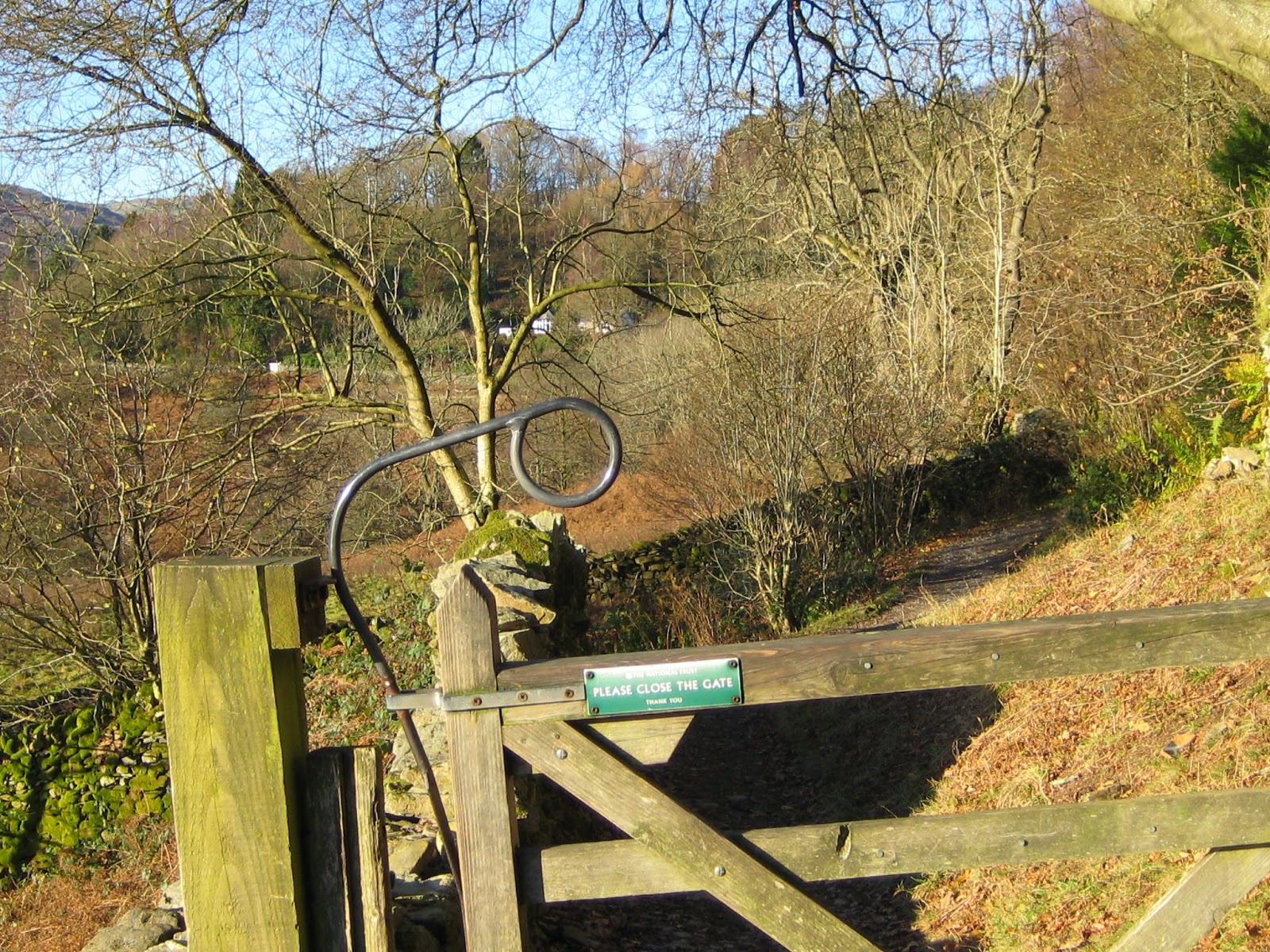 Coffin route back to Rydal 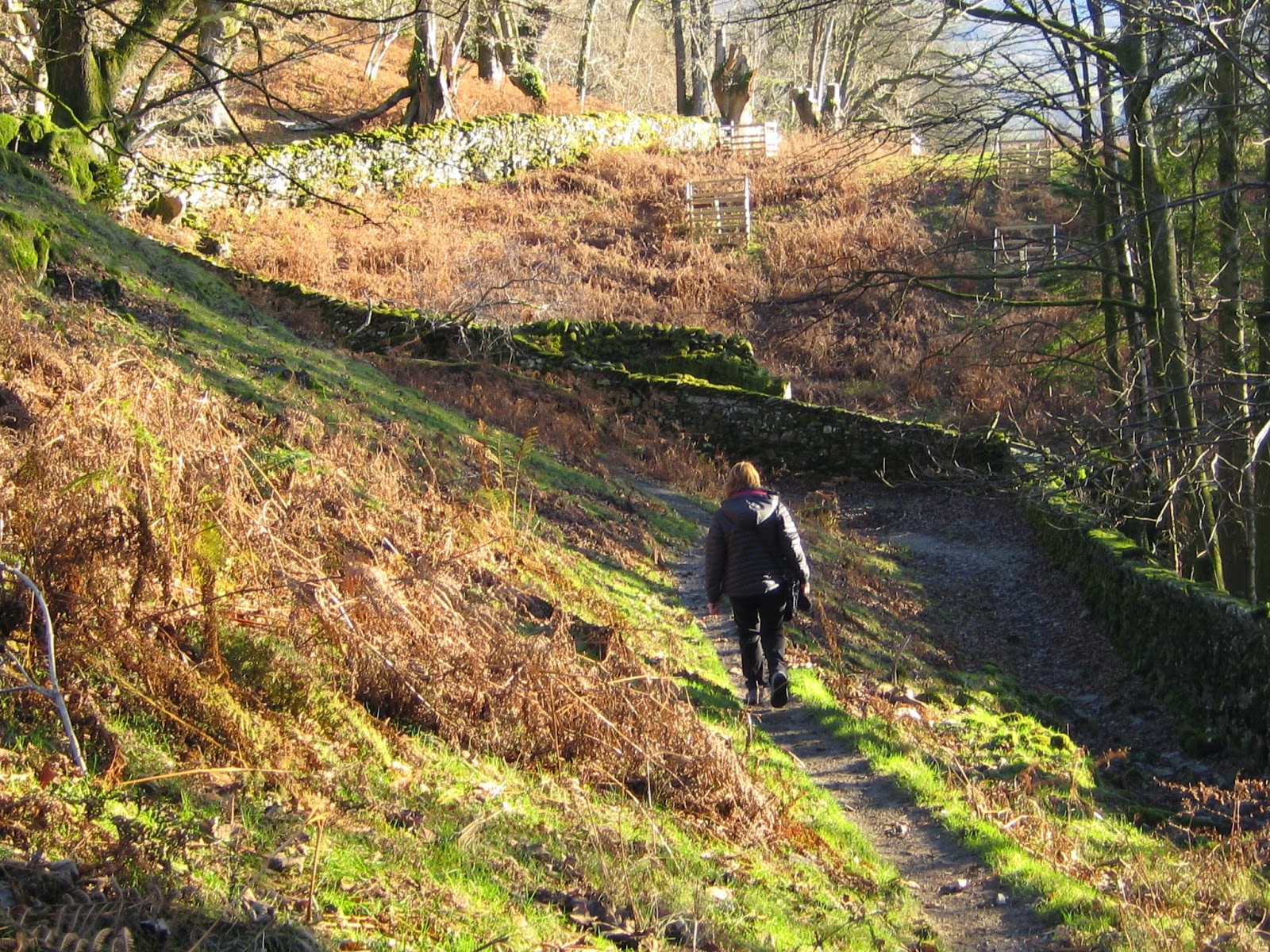 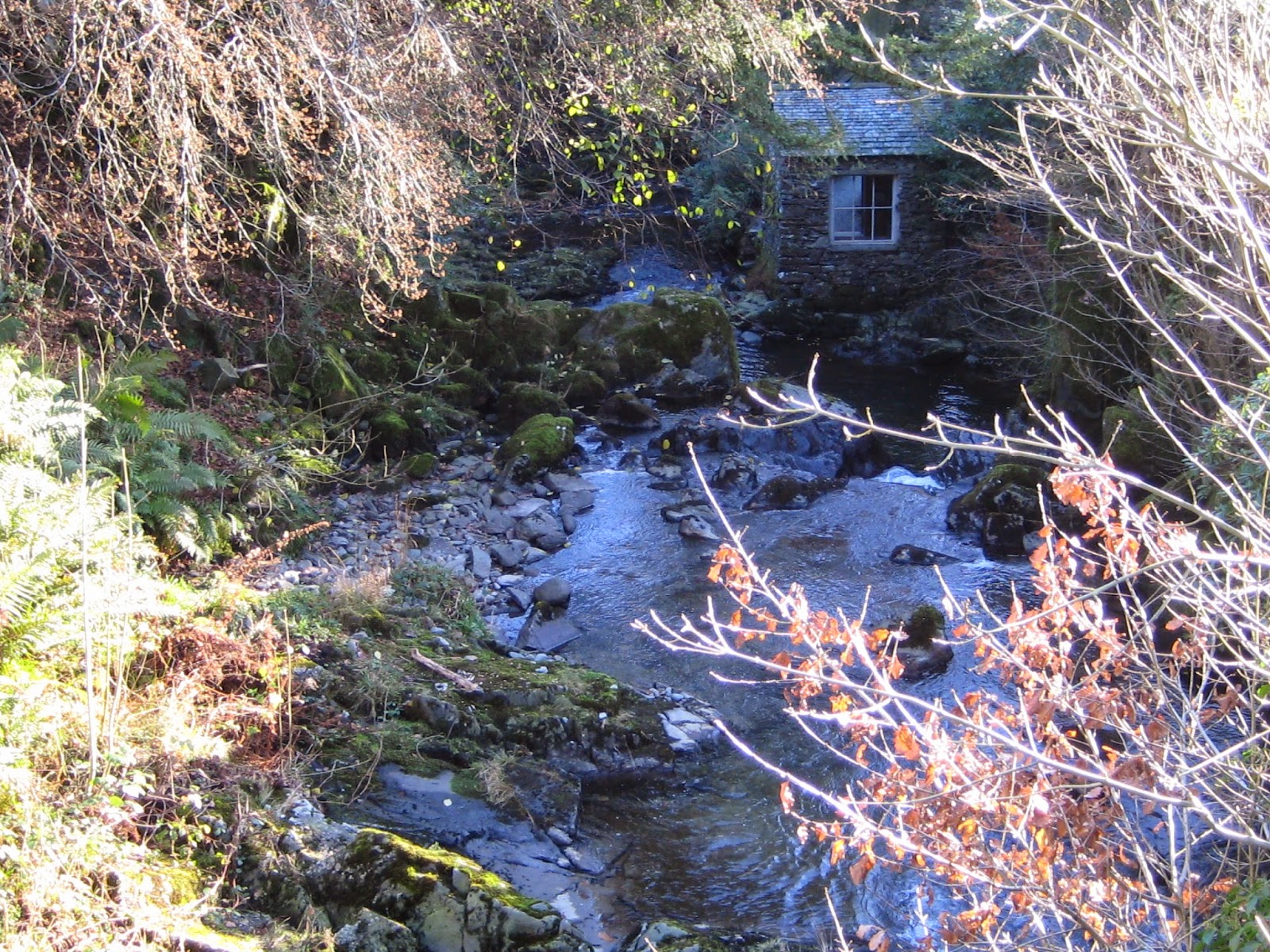 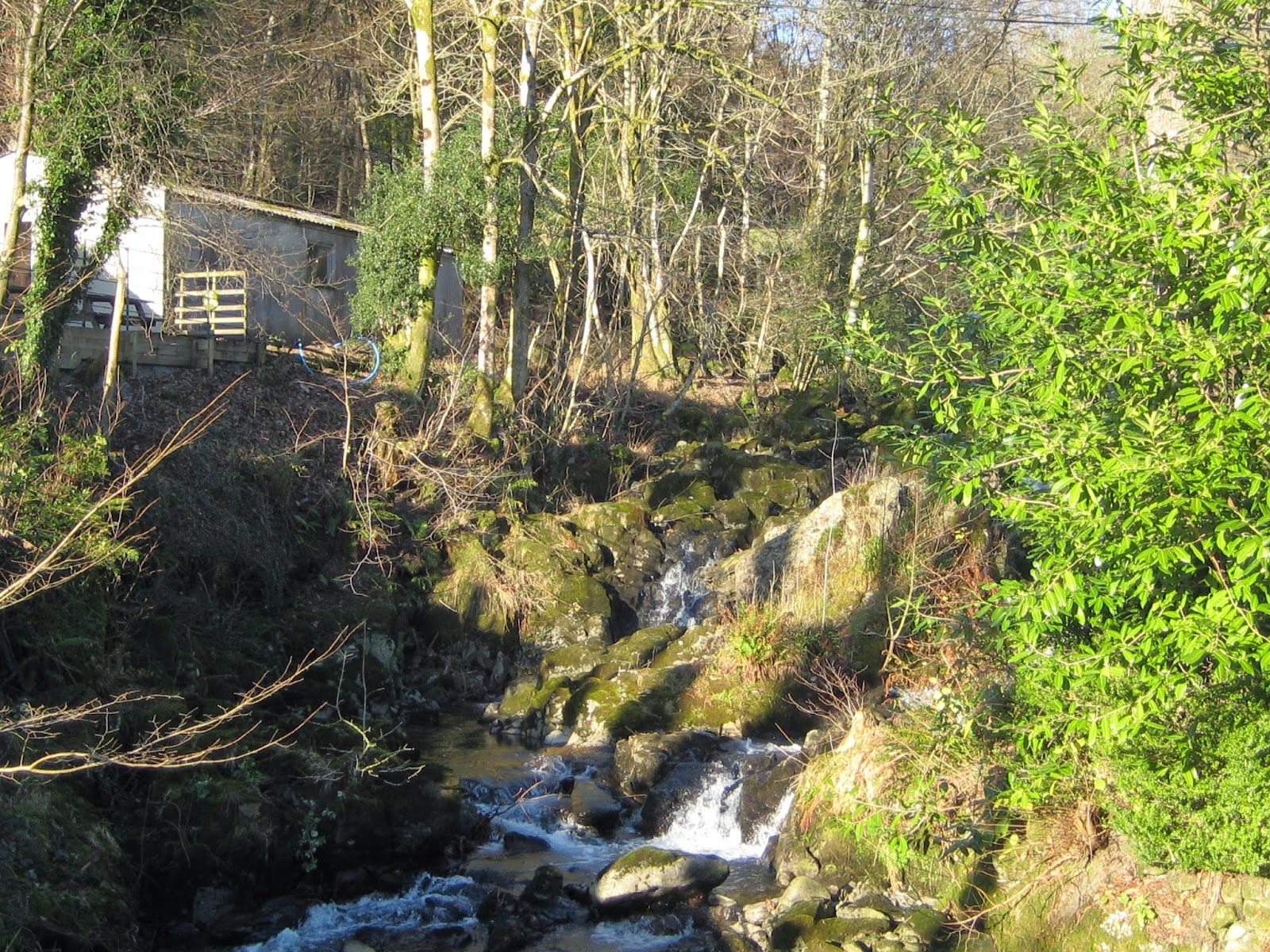 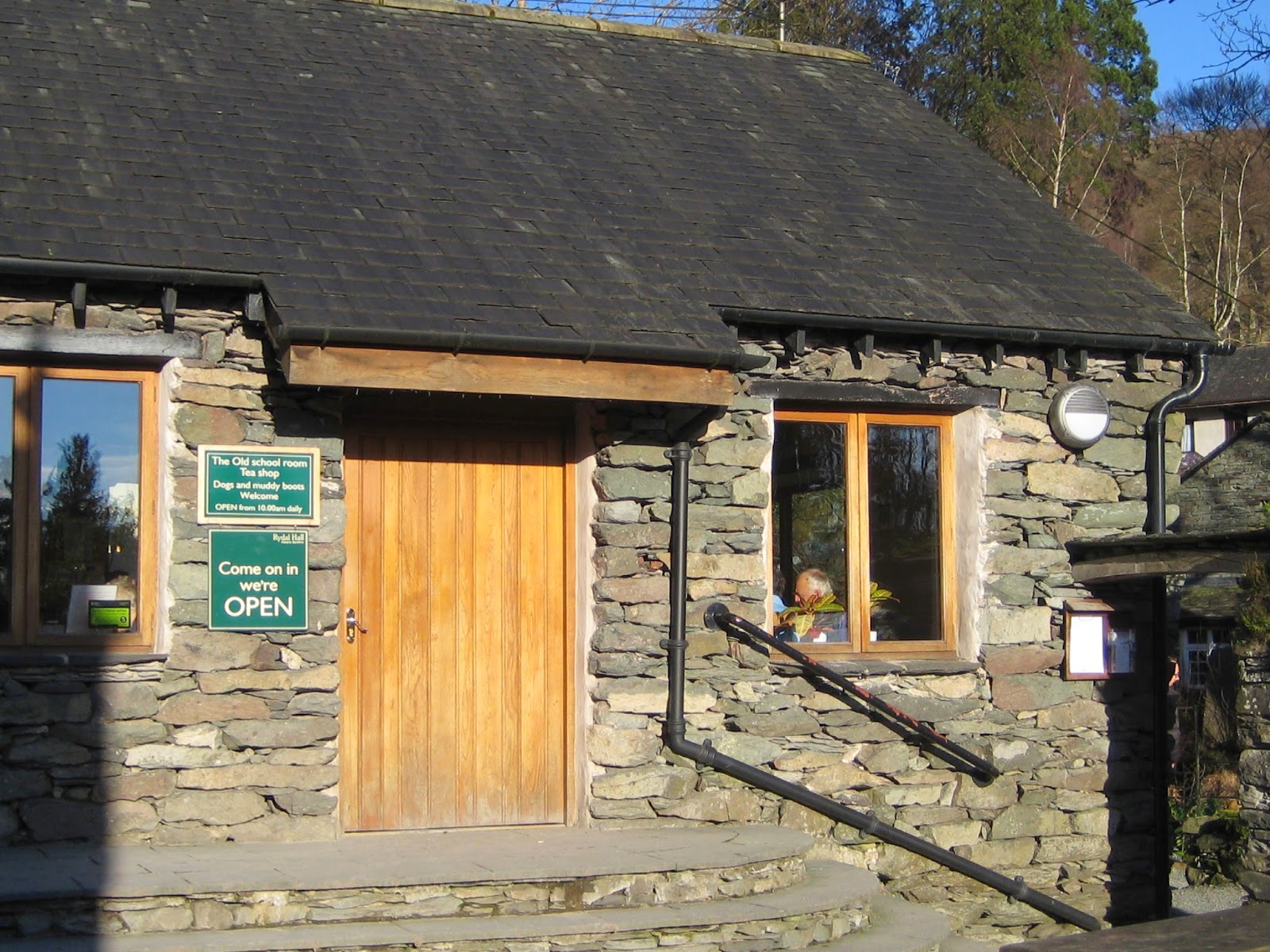 We then descended back down to the car, only about 4.5 miles, but a lovely walk.
It was a call in Ambleside on the drive back to look around the many 'gear shops' nothing to tempt me or Mrs IanB this time, we were rather annoyed by the excessive car park charges though for December, 'rip off' spings to mind.

Wednesday dawned, another sunny, but cold day so we took advantage and packed a flask of coffee and mince pies and walked down to the Ferry at Nab, the mist was just lifting off the water whilst we waited for the ferry, it was good to be walking rather than driving. There were several cars but reasonably quiet for early morning. The water was like a mill pond, with reflections of the trees very mirror like. We disembarked and walked through the woods to the track that goes to Wray. A strange occurrence was happening on the lake, the mist was drifting up the lake from the Newby Bridge direction , enveloping all, including the sun, we were a little worried that it would spoil our morning coffee sat in the sun by the lake, but! It seemed to melt away as quickly as it had formed. A small motor launch was chugging away up the lake, creating a small bow wave as it went; whoever it was has got one of the best jobs in the world on a morning like this. The air was still chilly and I was glad I put on my thicker coat. 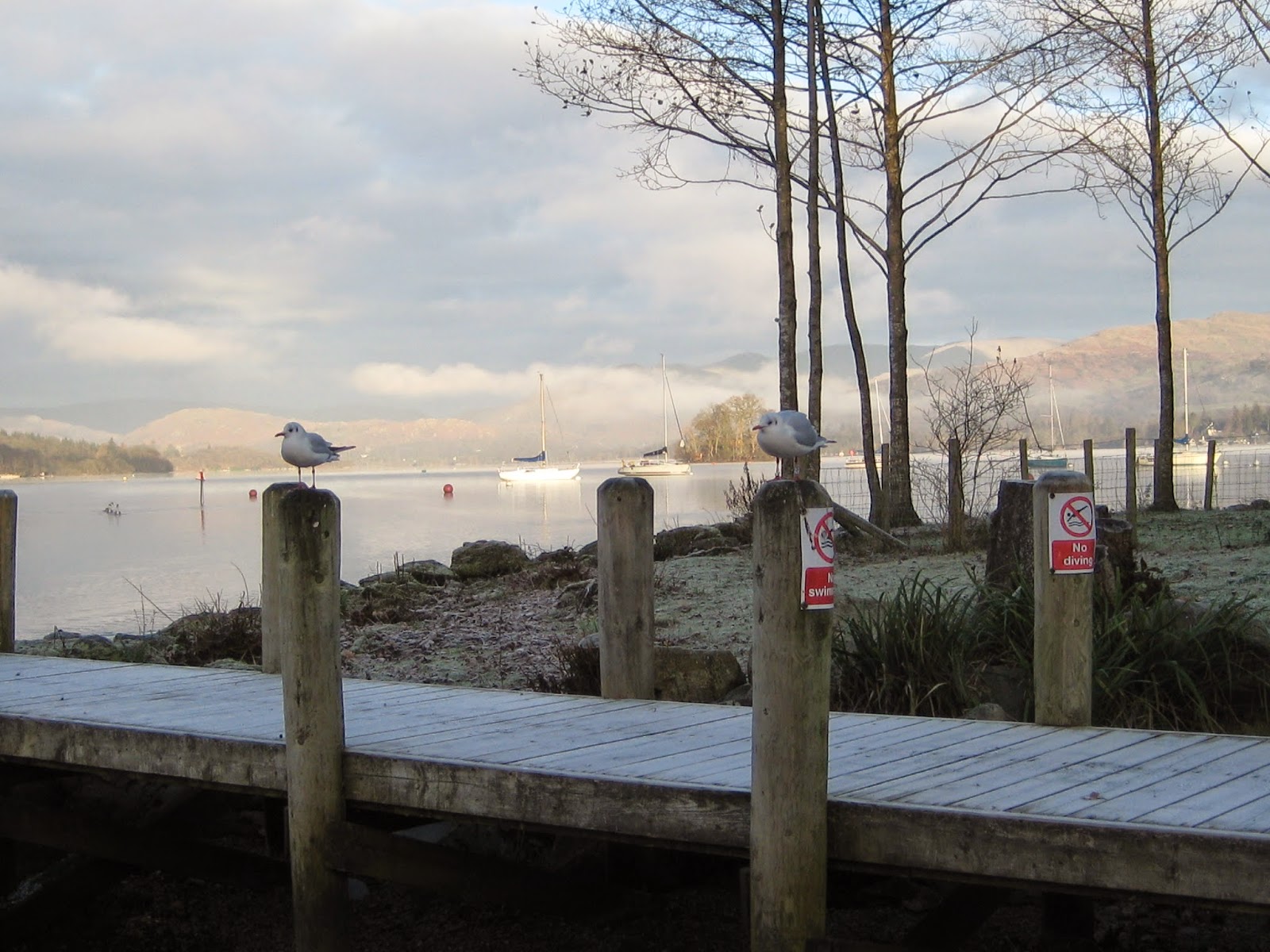 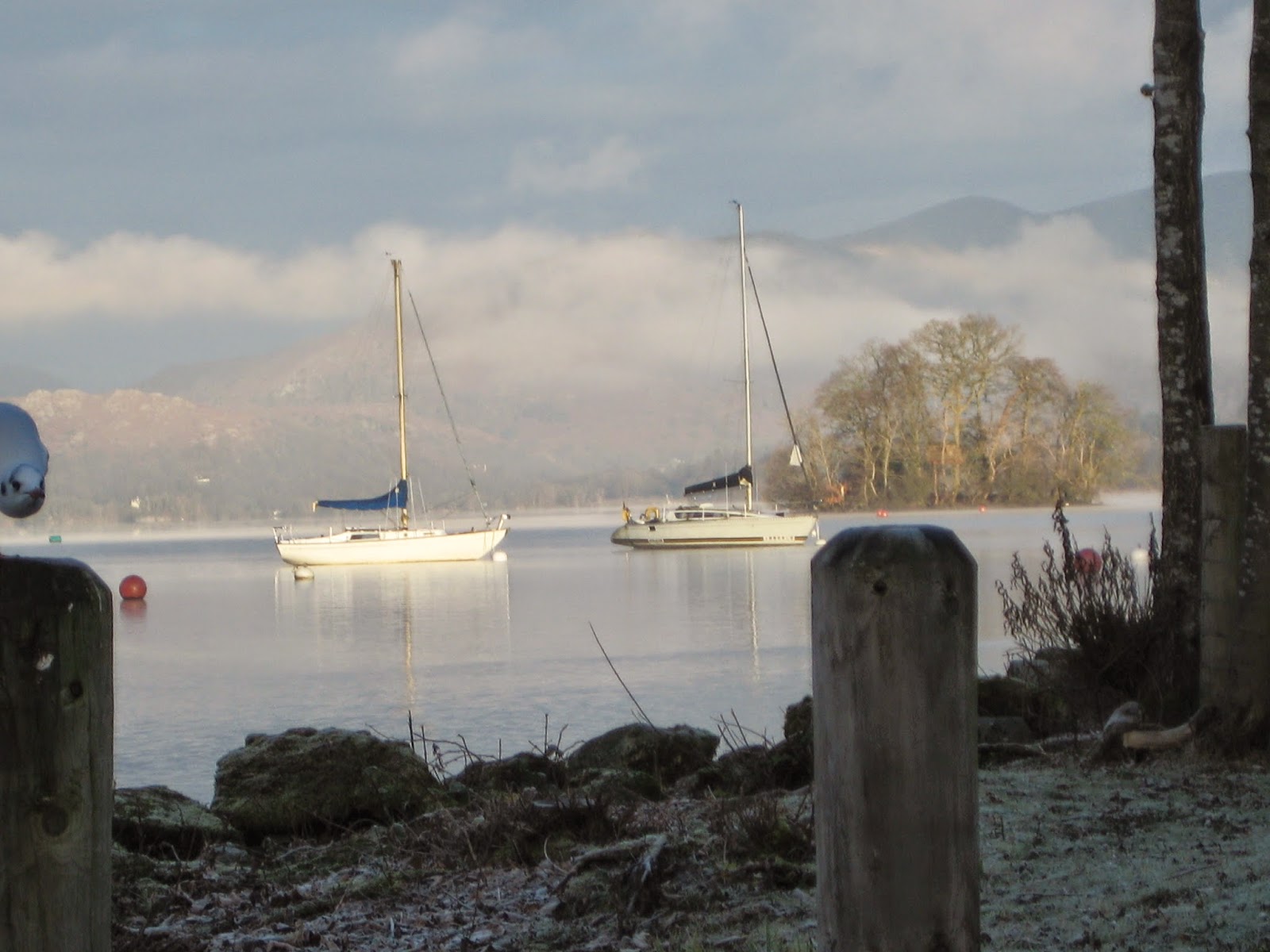 Waiting for the ferry 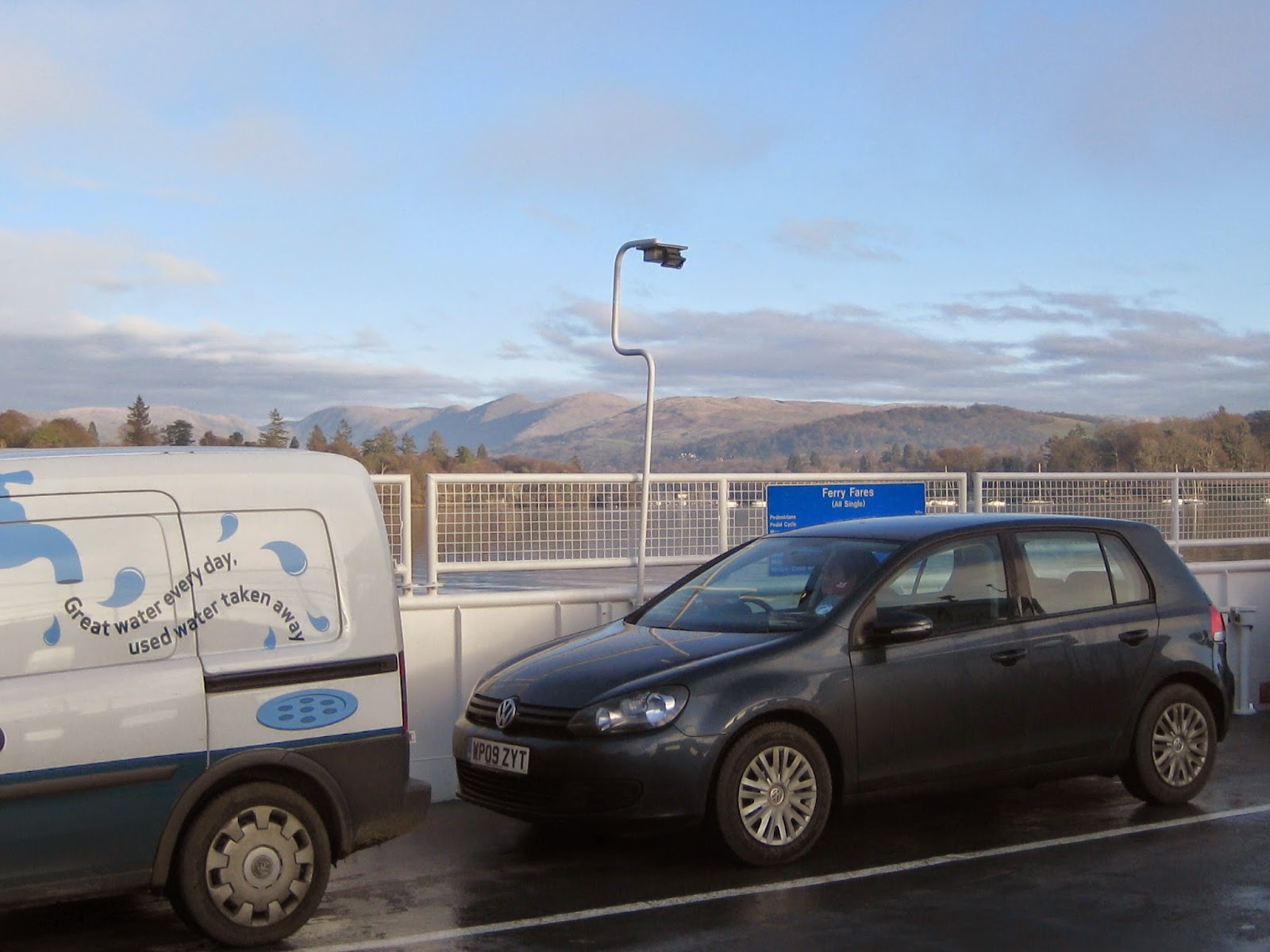 Cars on the ferry, not ours though! 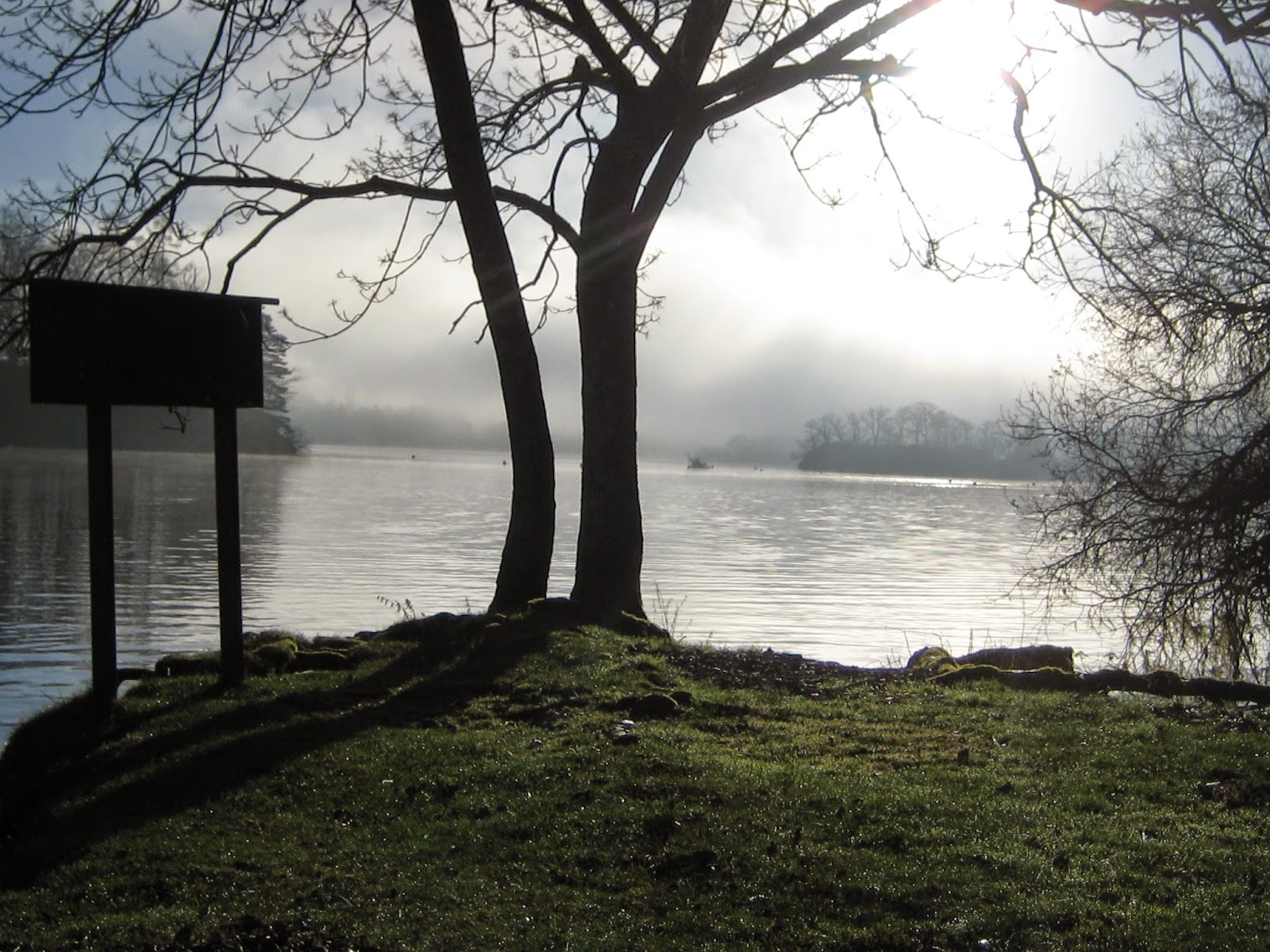 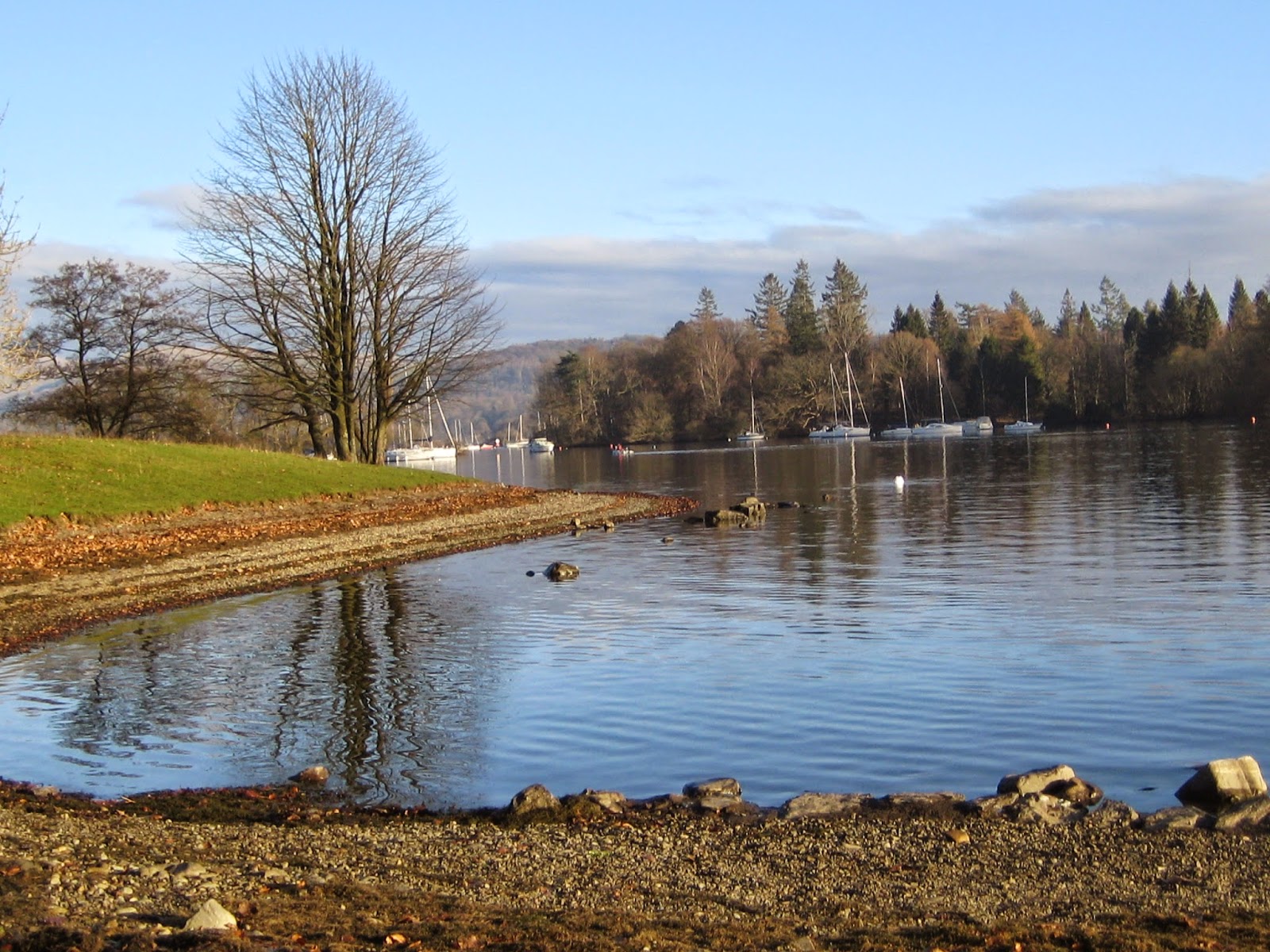 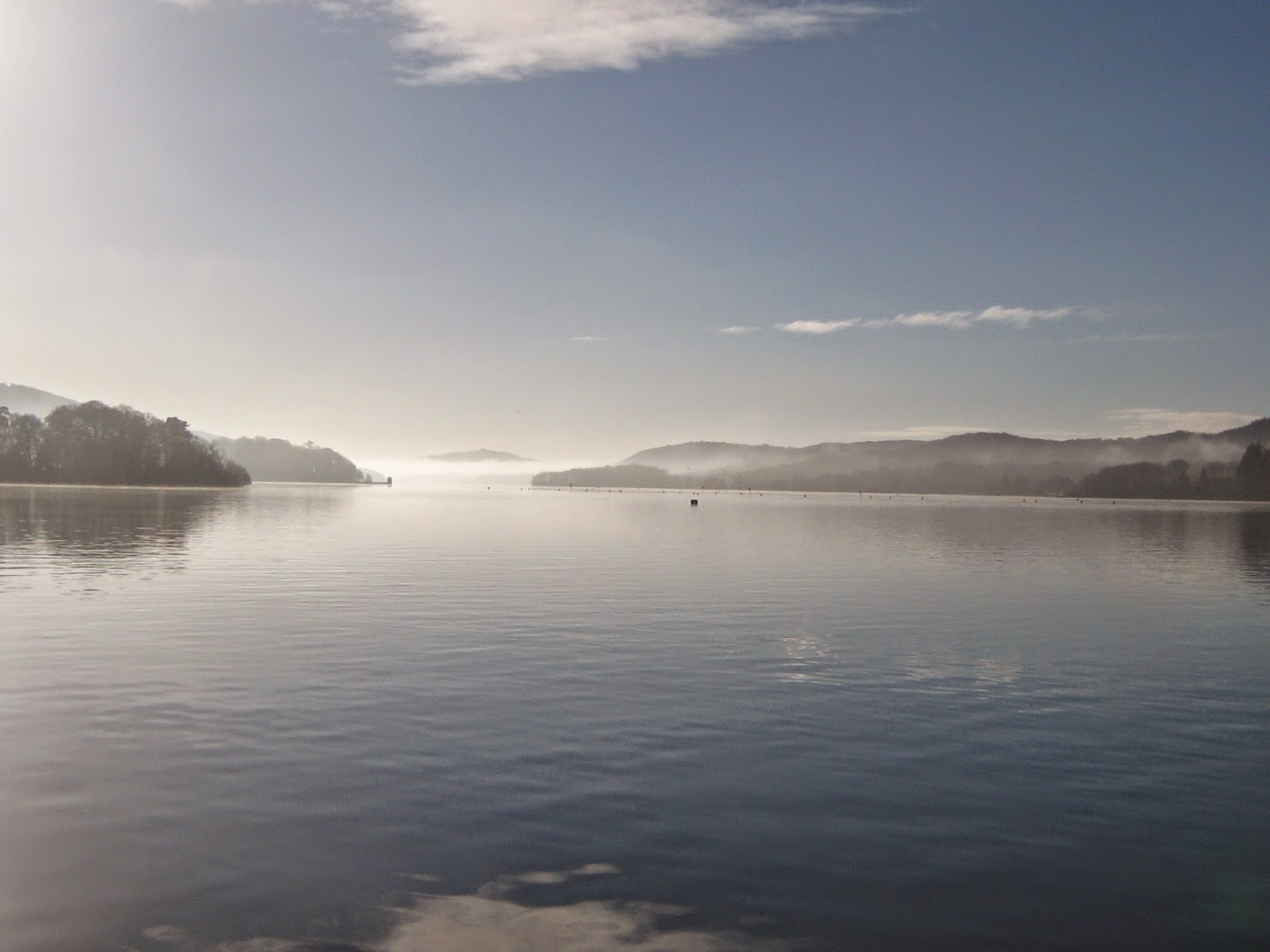 View down towards Newby bridge from the ferry on the way back
We walked along the edge of the lake for about a mile, not seeing another person or vehicle, each rise we went over introducing a new view of the various islands on the lake. We finally found a spot opposite Belle Isle, a convenient rock to sit on and another to act as a coffee table. It was very peaceful sat there as though the world had stopped, the only noise were the swans, upending in the water fishing for their food. The sun continued to shine and the temperature did rise a little as we walked back towards the ferry. A little busier now with more people and cars disembarking from the Nab side, walking poles, rucsacs, boots were in abundance, However, our return journey was just as quiet, we were the only pedestrians and there was only one car and a scooter.
The walk back to the caravan alongside the lake was beautiful, very peaceful. We got back just in time to drive to ‘Wilfs’ at Staveley for lunch, the best café in the whole lake district, he does a superb veggie chilli served in the old mill.
Another run was planned for this morning, so up early and similar routine as before, there was a cold wind blowing off the lake as I ran past and on through the park again, I managed 3.5 miles this morning extending my Tuesday run, I was pleased I was back with the land of the living and running again.Thursday was a day out in Keswick, trying to link a little Christmas shopping, with site seeing and of course a nice lunch out! [there is a theme here on cafes!!]
We were able to roadside park saving us a few pounds which we were then able to buy coffee in Booths supermarket [no relation] we did pick up a couple of pressies, and again we had lunch in the ‘old justice house’ which is now Wetherspoons and it was curry day!! There was a very nice craft market on in the town. 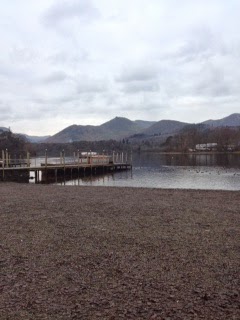 A walk down by the piers, with views over the mountains and the lake was truly outstanding, quiet, no wind, mirror lake and black mountains silhouetted against the sky, all summits were clear and there was a slight dusting of snow on Skiddaw. Catbells stood out and you could see the route to its summit, but I couldn’t see anyone on it today, surprising as its usually a busy peak as its not too difficult.
All too soon it was time to head south and return home, but not before we had a super veggie breakfast and cafe tier of coffee.
We hit the M6 around 10 am and did quite well until junction 19 – then STOPPED!! After 45 mins queuing we discovered a very large lorry had broken down in the middle lane!!! So traffic was down to one lane. After this hold up we were lucky to have a clear run the rest of the way home, a call in Gloucester for a mug of tea and a cuddle with GD, who had great pleasure showing us her Christmas tree complete with flashing lights. Overall it took us 51/2 hours to get home plus a stop, so not too bad for a Friday. When we got home the house was freezing and took some time to warm up with heating on full for several hours.


We had, had a great trip, thoroughly enjoyed and would like to have stayed longer, we will be back to the lakes in spring [I hope] and we will return in December again, the Lakes are a different place in midweek winter, well worth the trip.
Saturday was a beautiful day and instead of doing what we should ie housework shopping etc we skived off to Sidmouth and the White horse for our customary egg, chips and peas. it was very busy with christmas shoppers, the sea was very calm, it was strange to think 24 hrs earlier we were in the lake district.
Late afternoon saw me out on the streets in my running kit, 5 miles covered around one of my town routes - really pleased this week as I have run 11 miles!! the first running miles in 3 weeks!
Sunday was grey and damp but I was determined to get out on my bike, a text from Mike said he was ill and wouldnt be out. I finally emerged around 10 am and headed out over North Curry, nothing significant in the ride except the roads were really muddy and it was a cold damp ride, I was pleased to get home and lunch of homemade tomato soup with homemade bread - 32 miles covered.