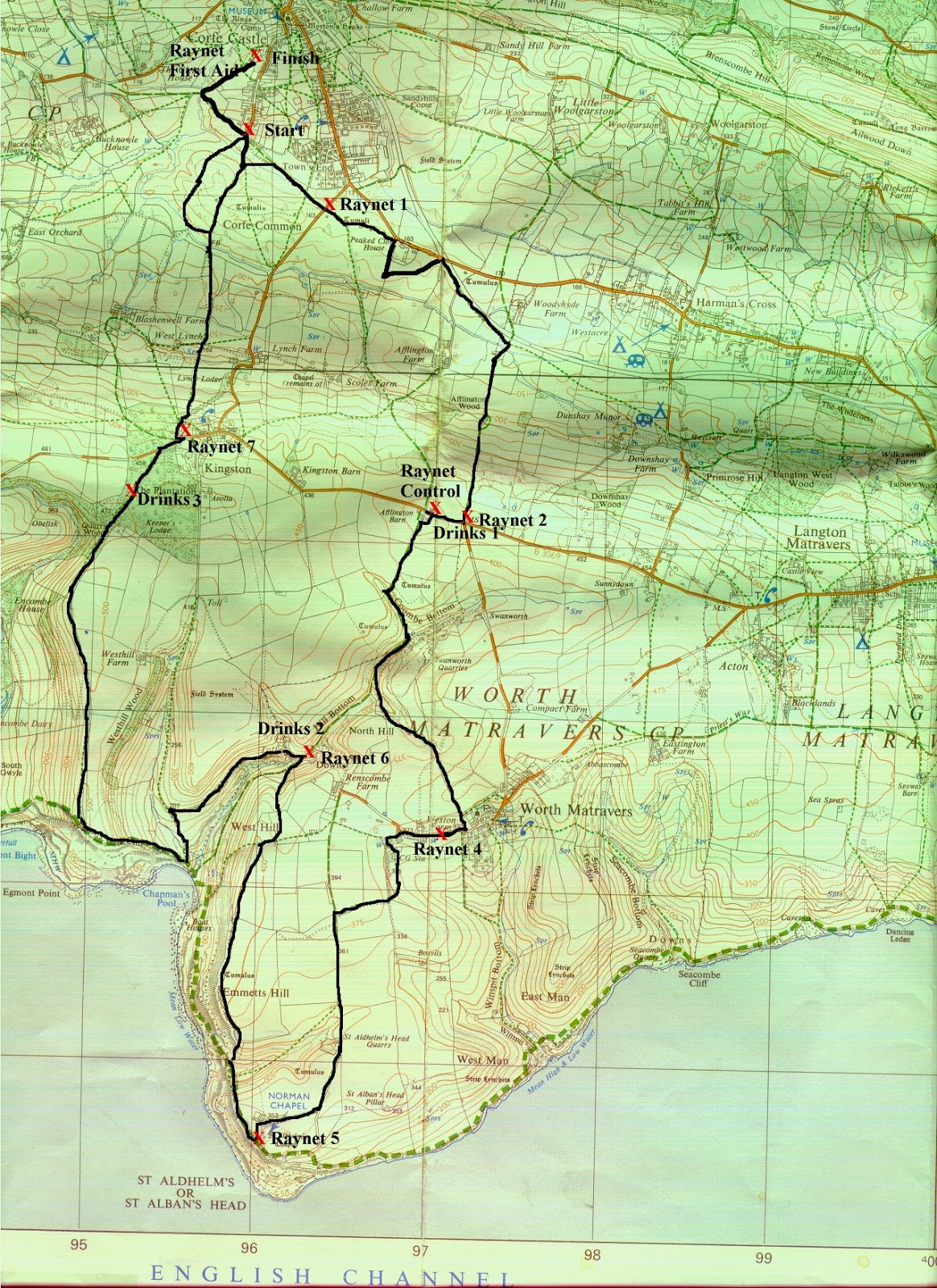 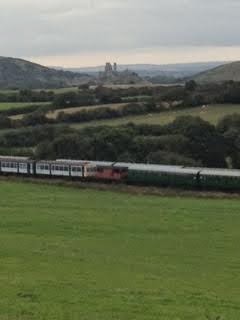 View from the camp, Corfe Castle in the distance, Swanage Railway at the front 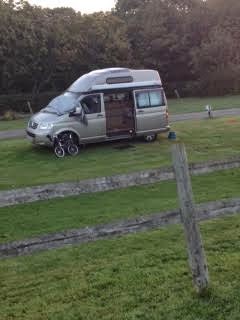 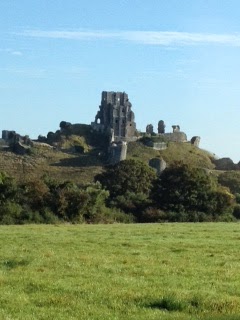 Close view of the castle near the start

I camped overnight just outside , at the ‘Down Hayes campsite’ lovely level terraced pitches with great views, but! The facilities were lacking, the usual typical British campsite, the ‘facilities’ were inadequate for the numbers, and based in a converted ‘shed/barn’, maybe I have been spoilt by the French sites and the Caravan club sites, sadly, many people seem prepared to accept these poor standards, when I read reviews only one mentioned poor facilities!
However, it was a very quiet night and I was up very early, prepared my breakfast, and got my kit ready, the weather looked good, clear blue skies.
I drove down the road to the event car park and was the first one in the car park! so, ended up down the furthest end from the entrance, it’s a good job the fields were dry.
Time went quickly chatting to the van parked next to me and to my friend Ali from the Dorset Doddlers, the weather was warming up and by the time we were lined up on Corfe Common the sun was gaining strength.

We were off, over 430 runners, heading across the common, taking a few minutes before we were actually running. It was a rolling hilly start before hitting the first stile where we were held up for a good few minutes, several of these clearly impacted on my finish time. I was already feeling the heat!!
The first hill up to the B3069 was much single track, rocky and overgrown, we ascended in single file, much walking as slower runners blocked any overtaking. A drink station at the top was welcome, I was determined to drink as much as possible, even though I was carrying 500 ml of ISO drink. It was a lovely descent down through a valley before another stile, a chance to recover a little and a few more minutes wasted, it was then a climb up to Worth Matravers, it was very hot in the sheltered valley, another descent down to the coast before the hard work began, a sharp right turn took us onto the cliffs, fantastic views opened up, but there was little time to see them and take them in, the path on the cliff edge was very narrow,I had a gel at this time, thinking there was a lot of climbing ahead. We climbed to St Aldhems Head and the coast guard station, clear blue sky, hot sun and fabulous views continuing.
A couple of hundred metres on there was a very steep descent, the guy in front telling me there was 217 steps! Very steep, difficult in a line of runners, after the descent it was a very, very steep up with the equivalent steps, my calves were burning by this time and reduced to a slow walk/jog behind other runners. The heat was really creating a difficult run.
After a pleasant few hundred metres along the cliff, we again descended steeply West Hill before a gradual rise around a nice hill with a good singletrack path and then hitting the concrete track up to Kingsdon, approximately 1.5 miles. I walked/ran a lot of this as it was very hot, I had another gel, not really feeling the effects of the first one. Runners were now more scattered and I was pleased to see I wasn’t the only one walking, I did  run a few minutes and then walk in turn. The summit at Kingsdon was a welcome as I thought it was the last hill, I was wrong!! I was still ok, a little tired, but getting there.
Down through the woods, and then I met problems, climbing over 3 stiles clearly upset my calf muscles, as after the third one I had severe cramp in my right calf, disaster, I lost about 15 places here and another 5mins, even then my running was slower, trying not to aggravate the cramp, by now I had drunk my last ISO drink, I could have done with more! There was only about 2 miles to go, but I was slower and lost more places, it was also up hill over the common, eventually the finish was in site and I was pleased to cross the finish line with 2hrs 31 mins on the clock, a little disappointed, but when I thought about it, the stiles and the cramp cost me about 15 mins.
I collected a drink and my tee, happy to have finished, but very, very tired and very, very hot. It was a really nice route, fantastic views with over 1800ft of climbing.

Always next year!!!! it was a great day out and really pleased I did it. A well organised event from Poole Athletic Club
Now to think ahead for the 'Exmoor Stumble' at Minehead and the Dorset 3 Peaks otherwise know as 'the Stickler' I did them both last year so know whats ahead, they are both at the end of October.
Posted by IanB at 12:16