After a couple of bike rides over the weekend, Monday was a day out walking on Dartmoor, and outing postponed from a couple of weeks previous. The weather forecast was looking fair, might/might not rain but generally good.
I was walking with an 86 year old friend from my college days, but had no concerns as Martin is very fit, very active and could walk the socks off me!!!! we used to run the college expedition group many years ago as well as being climbing partners.

We had selected the South moor which meant a 70 mile drive down to Ivybridge and then Cornwood and finally parking at Cadover Bridge,on the upstream section of the River Plym, not a million miles from Plymouth.
We were the only car in the car park as we booted up in the early morning sunshine, a winter chill to the air meant a jacket on to start off. We set off in the direction of Trowlsworthy  Tors, the open moor stretching out ahead of us. we first followed a farm track before progressing onto the open moor and the rough grass. There was a fair few livestock around, sheep, horses and cattle, completely ignoring us.

We decided first lunch would be on Trowlsworthy  and found a nice niche in the rocks out of the wind. Open views over the South Moor opened up as well as views over Plymouth Sound. Next objective was Hens Tor which was just over the horizon, so careful walking over tufty grass and crossing boggy areas where the streams were running off down to the Plym, sometimes it was tuft to tuft to keep feet dry! Hens Tor is an insignificant Tor I suspect rarely visited, very few foot prints around the Tor or paths leading to or from the tor, never the less a lovely spot to stand and stare at the beauty of the moor.

The next stretch was a navigation exercise as we had to find the top of Shavercombe  so a compass bearing kept us on target.
The top of Shavercombe is quite spectacular with a hidden waterfall which provided a nice sheltered place for lunch. We then followed downstream to the Plym and a river crossing, which provided a challenge and we had to walk a way up stream to find a reasonable crossing place, but even with walking poles to assist our balance it was a delicate operation on the very slippery boulders, some slightly submerged, but what we also found was there was not one river to cross but several tributaries that fed it, so we were pleased to gain a slightly higher ground away from the river. We had intended to follow the Ply back down to Cadover Bridge , but as it was quite damp we decided to take a longer route passing Ditsworthy Warren house, now a outdoor base for the navy recruits, a very remote rebuilt cottage in the middle of the moor. There is also in the area some fantastic prehistoric settlements, stone rows, field boundaries  and 'warrens' used by the tinners in the last century. The sun came out for a short time as we climbed up over Ringmoor Down, quickly followed by a short sharp shower of rain, our only one of the day.We had to use a compass once again to ensure we were on target for Ringmoor Cottage as the moor was quite featureless at this point. underfoot was hard work with very tufty grass. it was wonderful to be out on the open moor, views all around, and above all we hadn't seen anyone all day!
There were some ponies as we neared the road , minding their own business chomping the grass. As we hit the final road half a mile from Cadover it was clear it was school going home time as even though it was a back,narrow, minor road it was quite busy, so taking our lives in our hands with traffic passing closely, but! not enough to spoil the day as we got back to the car, well satisfied with the day out. the day was getting quite dusky now with cars with lights on, and after changing out of our boots and driving back to through Cornwood, needing lights ourselves down the narrow lanes. only about 10 miles covered but a lovely day out, we made a promise to meet up again in  January when the beauty of the moor will have its winter coat on, be it snow, frost or wind and rain, still a beautiful place to go and many memories of our time training Ten Tors teams on the moor some 25 years ago!! time flies but Dartmoor doesn't change. 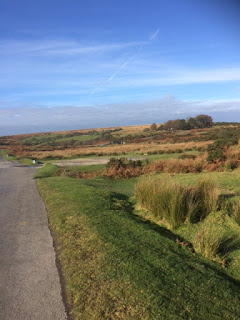 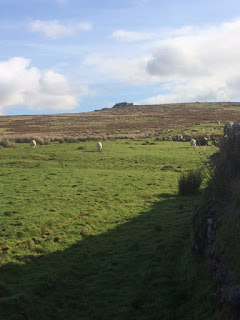 walking up to Trowelsworthy Tor 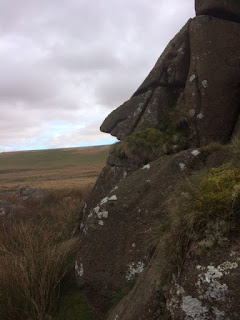 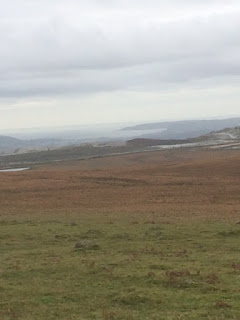 view back over Plymouth Sound 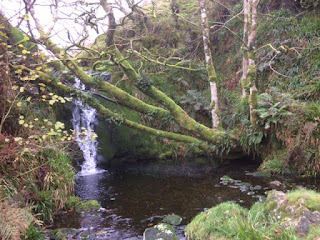 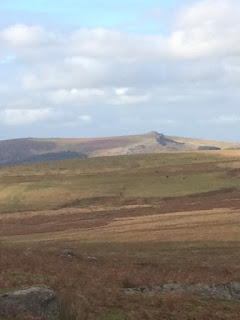 Leather Tor in the distance 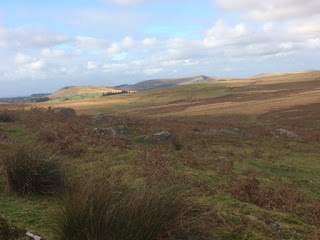 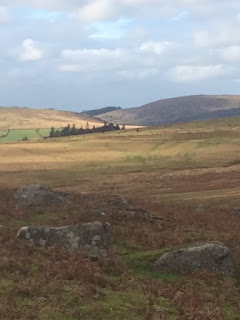 Ditsworthy Warren trees in the foreground
Posted by IanB at 03:01