11th November 2016
After the thrills of the last month with 4 running events, things have now gone a little quieter with no events planned till spring next year, the main one being the Grizzly in March. There are a few runs I may do, at short notice, for example the Drogo 10 is on Sunday and I am undecided, there is an Audax in Devon in a few weeks, I am un decided, I wonder if I have got into winter mode already, as the temperatures have plummeted with the first frosts this week.

Its also been very foggy this week , and Tuesday saw me and Mrs B driving up the A303 to Stourhead to view the Autumn colours, we had picked Tuesday, unfortunately it was also very foggy and didn’t clear! But it was lovely round the gardens, a couple of photos show how it was, I expect when the sun shone the colours were stunning with the reds and yellows. 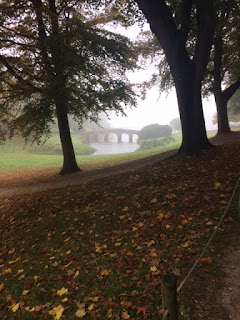 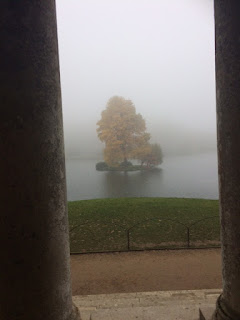 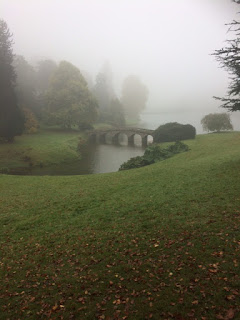 We walked around main lake  path which was beautiful in the mists, but somewhat very cold, glad of my large coat. There were lots of visitors, many with their tripods and cameras. They are outstanding gardens at this time of year. The Pantheon building was wonderful, its hard to imagine someone building it for entertaining! We went in the house this time as before when we have been its always shut. We were a little disappointed, there was little history other than references to ‘Harry’ which is now a themed story, of a son killed in the first world war. The house had been burnt down so we assumed all history had gone with it, and rebuilt later. A good day out followed by Omelette at Morrisons in Wincanton as the café at Stourhead was full!
I managed a 6 mile run when we got home just in time before it got dark, now the clocks have changed, I felt ok despite my Sunday run.

Wednesday the day after was different again, a stunning morning, chilly but bright blue skies and sunshine. A wobblies ride this morning another trip down to Lyme Regis where we were able to sit on the front at an outside café, in the warm sunshine and no wind, this is probably the last time this year we are able to do that. After several puncture in the group we had covered 38 miles so a decent morning out with 6 fellow cyclists.

Thursday after my school volunteer stint, I managed a short run of 4.5 miles, it started to rain after about 2 miles so I decided as I was getting very wet to cut it short, I have to say my legs did feel heavy today! Perhaps that’s why I hesitate about the Drogo 10.

Friday, plans to cycle out for a few hours were curtailed when it threw it down with rain in the first half mile! I cowardly turned and rode home, not fancying another soaking and spent the rest of the morning doing an Equality and Diversity training package on the computer for Bikeability, a requirement of Somerset County Council, not the most thrilling of mornings. Ironically its now 2:30 and the sun is shining, but too late to get togged up and get out on the bike as its dark by 4:30 ish, I am too lazy!!!


Now will or wont I do the Drogo, looks a good course on Dartmoor, all off road road Castle Drogo, lots of steep ups and downs and 9.6 miles!!! We will see!