7th November 2016
I sat at my computer on Saturday morning, with the sun streaming through the windows, even though it was very cold with the northerly wind I started to think will I , wont I ? That is, entering the Drogo 10, the 10 mile off road run on the National trust Castle Drogo estate on Sunday? It is classed as a Fell race and comes under the FRA rules.

My finger hovered over the enter button, then pressed it, paid the fee and I was in!!! So an exciting day was planned for the morrow!! More later?? whats pleasing as its only a £13 entry fee and half of that goes to the National Trust.
Saturday was spent driving over to Dorchester for a look round and a bit of pre-Christmas looking, and shopping.

Sunday was forecast to be extra cold, so at least this time I took my long sleeve Paramo vest with me to the race. An hour’s drive down to Castle Drogo, down the narrow single track lanes on the edge of Dartmoor to the castle, the fields were white over with frost and the trees and hedgerows stunning in the morning sun.

The car park was still quite empty, as I arrived early [as usual] and strolled down to the registration tent in front of the castle to collect my number, 269, the castle was covered in scaffolding as they are doing major restoration work to stop the Dartmoor rain getting in, but the position overlooking the Teign Valley is spectacular. I walked down to the top of the last climb of the day to Sharp Tor the ‘Hunters Path’ a good stiff climb, it was also the top of the steep first descent of the day where because its single track, very stony etc. you need to be somewhere near the front of the field as you hit this section after a couple of hundred yards, so a quick start will be needed! 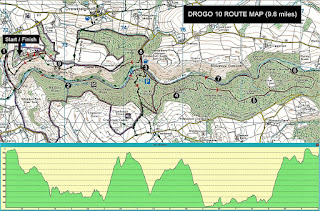 The views across the Teign Valley on such a beautiful morning were stunning, with all the leaves now turning, on my photo you can just pick out the scaffold of the castle to the right of the picture. 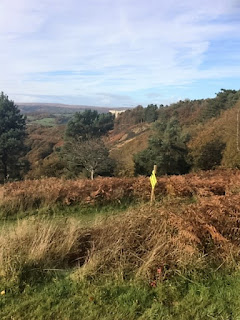 You can just make out the castle in between the trees 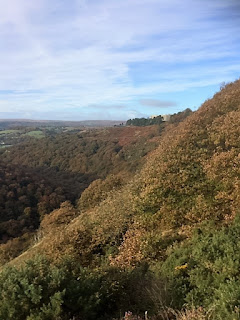 10:30 soon came, I had, had my customary jam sandwich before the start and carried my bottle of ‘Tailwind’ energy drink along with a gel, just in case I needed a boost at the end of the 9.6 miles and the 1661 feet of ascent. I wore my long sleeve under my short sleeve as it was very cold at the start, but I still kept to 3/4 tights as I thought I would be too hot with all the climbing [as you can see from the profile in the map above] I used my Fell raisers[Shoes]  as even though it was not expected to be too muddy they are good on stony ground.[it turned out to be muddy on several of the forest  track descents.]

I made my way near the front [but not too near] and after the usual Race Directors address we were off a field of 300, all aiming to get to the top of the steep single track descent first! It was a fast start, I did manage to get a good position for the descent and as we hit the bottom, the girl in front took a fall, here partner helping her, bloody knees showing, I think her race was over! Down we went then on a wide track down to the River Teign below Hunters Tor, across the new single track footbridge [ the last one washed away in the last storms] and to another potential bottle neck, a stile over a wall, I was lucky here and managed to get across the bridge and over the stile without waiting, it was then a roller coaster run along the valley next to the river, a very stony track, covered in leaves, I soon came across another victim of the stones, after tripping up. I now started to recover from my early fast start, but other runners were overtaking me, I couldn’t do anything about it deciding to run my own race pace, After 3 miles we came to Fingle Bridge, a point we would revisit from another direction, here the arrows pointed right and the track went up! Very steeply, we were now all walking, on the rough stony track, numerous bends meant you didn’t know where the top would be, it just got steeper, It was hard but I felt in control and ‘plodded’ on, no one overtook me, in fact I passed a couple !! When we finally reached the top it was an anti-climax as there was a short sharp descent, before climbing once again, I estimated the climb of about a mile, we ran along another roller coaster forest track before an even steeper descent down, I enjoyed these bits determined to make up lost time on the ascents.

But with every down there is always an up another mile of steep forest track, before yet again plunging down to the River Teign, again I let the brakes off to gain time I lost on the ups, knowing full well that younger, fitter runners would catch me on the track along the valley, people out for a Sunday stroll must have thought us bonkers!

It was a good two miles along the valley, minor ups and downs along the way, I felt my pace slowing, I was doing 8.15 min miles but as I progressed down the valley I counted 4 runners come past me, I looked again and my pace had slowed to 9:30 a mile, the valley seemed never ending! But finally the water station came in sight and Fingle Bridge again, we had to dodge the walkers over the narrow bridge then negotiate our way through the visitors to the pub [ it’s a very nice pub] before a sharp right took us onto the last climb of the day, a very steep narrow, Hunters Path that leads back to the finish, we were all walking, I was holding my position, I decided a gel was necessary so quickly took in the liquid, hoping to feel the benefit quickly to get me up the hill, people coming down the hill were kind enough to let us past, I still felt to be going well and pleased with my progress, a mile later we were at the top, only half a mile to the finish, then 400metres [a long 400 metres!!] the runners in front had disappeared from view, and there was no one behind me, again it seem to go on for ever , then the final bend into the finish area, quite a crowd were there and I got lots of clapping and cheering, which was wonderful, I crossed the line in 1 hour and 41 mins and 39 secs, 9.65 miles and 1661 feet climbed, I was happy with that, it was a good hard run that I felt I had done well on. The results also show that I came 188th out of 297. 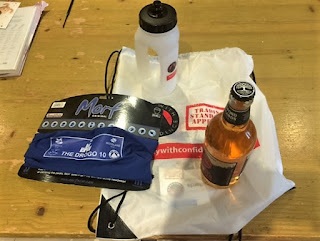 Runners were still coming in as I recovered in the warm sunshine collecting my goody bag from the tent, and it was the best goody bag I have had!!! I walked back to the car to change before returning just to check if I had won the over 65 category again!![It was the same person that won it last year and he beat me by 10 mins!]  I didn’t I came second! Never mind it was a lovely run and if I am fit enough will return next year. Well organised and friendly in a beautiful setting.

I must return to visit the castle, I remember once[ 20 years ago]  bringing a group of students rock climbing on Sharp Tor, and very large ants nibbling me as they climbed the ropes ahead of me!!!
Posted by IanB at 08:24