Burnham on Sea, Sidmouth and the Jurassic 10k

Sunday 7th August  2016
I decided after my run along the Jurassic coast on Monday that I would risk another run on the Wednesday, I was really pleased I did, it was really lovely out across the coast early in the morning, I was earlier than last time, in fact it wasn’t fully light when I set off for the half hour drive to get there, the A35 was empty!!
I felt ok legs seem to be ok, knee still niggles but not when running, only tender around one point?? No idea why.  The two pictures show how nice it was one is the famous Colmers Hill near Bridport, from Dog House Hill, just before I turn to return run, its on everything locally, tea towels, postcards, placemats……….. etc. it is a very striking hill. Another 5.2 miles in the bag and some serious hills.
The other is attempt to get the harbour into perspective from Thorncombe Beacon, Portland bill can just be made out in the distance on the right of the picture. 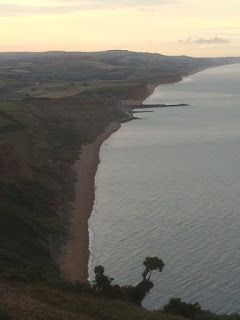 West bay Harbour sticks out, taken from the top of Thorncombe Beacon 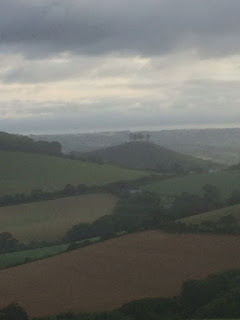 Colmers Hill with the trees on from Dog House Hill

As I got home early we decided to look at new awnings for the camper van, and the nearest place is Highbridge near Burnham on Sea, about half an hours drive up the M5.  We didn’t see anything suitable and they were all £400 + so we will stick with what we have got, even though it’s not brilliant in bad weather [when you need the awning]
After this we took a pic nic lunch to Burnham, had a wander down the sea front, dodging the mobility scooters. Burnham is a lovely place and a long sea front, we parked at the south  end where the river [Parret] exits to the Bristol Channel making a lovely long walk. It was however very windy and we had difficulty finding a sheltered spot to eat our lunch.
You could see Hinckly Point from where we sat, a blot on the landscape [ see photo] Hinckly is the dark splodge!!! Despite all the shilly shallying I am convinced it will get the go ahead as they have pumped millions of tons of concrete there and shifted millions of tons of earth, at great expense!!! 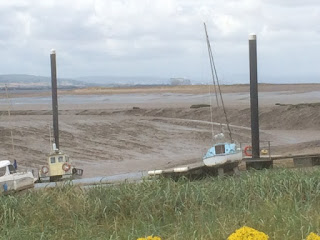 The blot just to the left of the mast is Hinckly Point Nuclear power station. across the bay.

Friday I needed a loosening run, but it didn’t go as well as I intended, I ran 5 miles around town, but as I was getting near home, my knee hurt and so did my Tendon!!! Just what I needed. I massaged them, iced them etc and Saturday morning it was still rather sore, the day before the run.
Saturday was a stunning day for weather, clear blue skies, hot sunshine so we spent the day down in Sidmouth, we were fortunate that the previous week had been folk week, and we had missed it!!!
The beach and front were heaving with families, it was very hot and even the ‘white horse café’ was very busy for our egg, chips and peas!!! 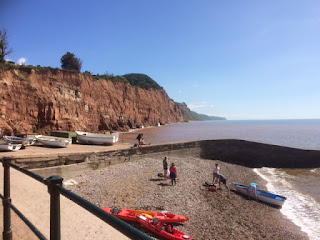 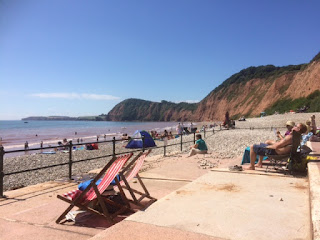 West cliff at Sidmouth, Ladram bay can just be seen with the headland just before Exmouth sticking out 10 miles away.

Sunday Race day!!!
After yesterday’s heat and brilliant sunshine the days forecast was for cloud first thing and to clear by about 11:00 clock. I packed my bag the evening before sorting out a drink, food etc as well as clothes, at least clothes were easy, Ron Hill shorts and Gore running wear shirt!! [ present from eldest son, really nice in hot weather].
I was up early, deciding to have half a breakfast at 7 ish and the other half at 9ish giving time to digest before the run [ I sound as though I know what I am talking about!!! But not really!! Just scared of getting hungry half way round!] so it was small bowl of Muesli with banana and satsuma.
I drove down to West Bay nice and early, in fact I was parking up by just after 8:30, the bay was quite busy as it was a car boot, ‘West Bay day’ and middle of peak holiday season, but! The cloud was really down on the cliffs very thick. I walked across to register and collected my free Tee shirt, nice quality and unexpected. It was still an hour before the start, so a nice stroll around the front, the cloud now starting to burn off a little.
I pinned my race number on, and decided against extra breakfast, having a cereal protein bar instead, as well as sipping some ISO star. Ten o clock soon came as we stood around the start line in anticipation, people chatting nervously, everyone looking fitter and leaner than me! There were two races on at the same time the 10k and the half marathon, I was glad I opted for the 10k as it was 2 circuits of the 10 k course that’s twice up Thorcombe Beacon!!! And with the morning hotting up once would be enough.
We had a briefing from the chair of Bridport Runners, there seemed a reasonable number of entrants [ about 120 altogether according to the website     http://bridport-runners.co.uk
The weather had almost cleared the hooter sounded for the off! Along the seafront before a u turn and the first hill of the day, my pace was quite high as I kept up with the main group of runners.
I was soon warming up as we got to the top of West cliff, we then dropped down to a single track path before approaching a style!!! Bit of a traffic jam here, fortunately I wasn’t too far back, more single footpath followed but the pace was ok, still a little fast, but despite the heart rate monitor showing 160 BPM I felt comfortable. Down into Eype and then the next climb, the sun was out now but the high cliffs still shrouded in mist. I ran most of the hill, but succumbed near the top, as everyone else seemed to be walking, first drink station so I had a quick slurp of water. Once up the hill it was a pleasant run across a newly cut meadow, before a short descent and the biggy! Thorncombe Beacon, I could see a trail of runners ahead near the summit, all walking, as did I but having done it before knew what to expect, interesting conversations around me about its steepness and comparisons with other hills etc. I was glad I wasn’t a half marathon runner as they had to do this twice. At the top the clouds were just breaking giving a ‘mountain effect’ another drink station, but this time I used my own energy drink before the undulation of Doghouse hill, a very sharp descent before a sharp right turn and then a climb back up towards Thorncombe Beacon, I was behind another runner along here in tights, I stayed behind for a short while until I found it hard to keep the momentum, over the top and a lovely bridle way round and down to Down House Farm, tourists were around now, but they kindly stepped aside to let us past, I am not sure what they thought though, many gave us encouragement as they strolled along in the now lovely weather.
Down through some lovely meadows where I was able to gather speed, the newly mown hay acting as a cushion, I looked back and was a good way in front of other runners and feeling quite good, we then hit the road at Eype before the final climb of the day back over Westcliff, I started to run up, but half way resorted to walking, at this point a runner overtook me and I tried to keep on his tail, less than a mile a half now and a good down hill in between, I went over the top and decided to up the pace once more, passing tourists, and the final ‘fling’ down the slope to the seafront was a blur of dodging tourists and dogs, I hit the tarmac of the sea front and made a dash to try to catch the runners in front, I noticed  8min pace on my watch, it was a welcome site the finish line, I didn’t catch the other runners!! I got my medal and a well earned bottle of water!
6.27 miles run, 1 hour 8 minutes 55 seconds, very pleased with that, I purposely didn’t look at my time all the way round, except looking at my heart rate, which was high all the way round 163 average[88%] with a high of 176 [95%] although I didn’t feel I was 95% at any time and certainly didn’t feel to average 88% so may be it may be out slightly.
The results showed I was 24th out of 68 and the winner did 45 minutes, but to add insult he was 63 years old!!!!! 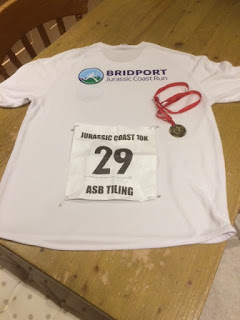 Fantastic day out, I stayed a while and cheered in some of the half marathoners who I think did really well in the now blistering heat. The crowds down West Bay were no very large and the descent down the last hill was problematic for some of the later finishers as the caravan site over the top disgorged there clients down into West Bay for the ‘West Bay day’ stalls and vintage cars etc as well as ice cream beach……….
My injuries came to nothing I felt good all the way, I was rather hot and glad I took my drink, when I got home I was quite tired, I think it did take a bit out of me today!!!! But worth it a great run on a beautiful course, full of interest, back next year, but again 10k!!!!