A visit, some cycling some running and some touristy stuff!

29/7/16
As I said in my last post my intention was to cycle on Friday, run on Saturday and cycle again on Sunday, which I did!!! What I havnt said before was that I didn’t do the Devon Delight Audax, unfortunately I couldn’t get my act together in time, I hear it was a good event with good route and weather, always next year.
It was a hot Friday afternoon,  so a leisurely cycle seemed a good idea, unfortunately I picked the only rain cloud within a 20 mile radius to cycle under so encountered a ‘wetting’  but enough to be annoying. 26 miles covered around the levels once again.
Saturday I managed a 5.2 mile run around the town, my Achilles’ tendon still feeling sore, but not too painful and didn’t seem to be getting any worse. It was a nice run under clear blue skies and a setting sun, evening runs are often really pleasant at this time of year be it on a Saturday night!!!
Sunday was looking good, no rain forecast so Mike and I agreed we needed a long ride today, 50 miles + but! A number of events and the weather had other thoughts.
The first event was I punctured my front tyre after about 3 miles, I couldn’t understand what had caused it so spent some time trying to find the cause in the tyre. I only found it was a ‘snake bite’ pinch puncture when mending it when I got home. My pump also decided to give up so had to borrow Mikes, after much messing we were back on our way towards Ilminster, Heading for Stoke Sub Hambdon, part way there I came across an ex work colleague building his own house so we stopped to natter to him, he was keen to pick Mikes brain as Mike is a builder, so more time passed and we had only done 16 miles. Just as we were pulling away and approaching Stoke Sub Hambdon  the skies darkened and the rain came down, so we sheltered under a large tree till it passed over a little, no rain was forecast!!! Neither of us had a jacket so got rather wet, but, it was very warm and the rain evaporated quickly, although the shower made the roads very wet, I had mudguards, Mike didn’t!!
By Martock  the rain had stopped, but as we were passing the centre we spotted an elderly lady slip on some very slippery paving slabs, we stopped to give her a hand, lifting her to her feet and ensuring she was ok before continuing on our ride,[ more time used up] it was good to see she was unhurt, but will be bruised later,  strangely the roads just outside Martock were dry, clearly no rain had fallen here.
By the time we reached the bridge at Muchelney for our snack time was pushing on, the skies were once again darkening. We decided to cut our losses and head home via Hambridge and Hatch Beauchamp rather than an extended ride round through Athelney and North Curry etc.
We were caught once again 5 miles from home with a fine drizzle, which got us wet enough once again to be annoying. but! Again by the time we were two miles from home and eventually home there was no sign of rain, difficult explain to our other halves that we did get soaked!! We still managed 46 miles though, so a decent ride after all and we had been ‘good Samaritans’ Plus I caught up with an old friend. So a good morning out.
Monday I was able to fit in another 26 mile cycle, I used my Gazelle vintage bike, which felt good, I am always surprised to find I don’t need the gears of my Qoroz Titanium bike!! this time without getting wet, perhaps it was because I took my jacket!!!!!
Tuesday saw us playing tourists as we drove the 12 miles down to Lyme Regis [Shepherds Bush on Sea!!!] our daughter had come across for a few days, so it’s nice to get out to local  attractions. 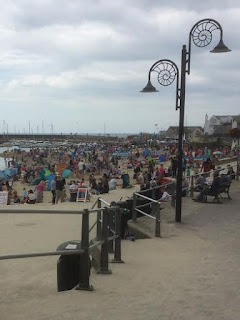 The picture shows the small beach, very busy!!! An expensive coffee and an expensive lunch a pleasant stroll along the famous Cobb and sea front .  Lyme has changed over the years from a small pretty fishing town on a hill with a good shopping area, Woolworths and grocery shops, bread shops etc.  To having Sea salt and Fat Face and Tesco [ where Woolworths was!]  as well as trendy cafes and gift shops, no Woolworths, no grocery shops!!!!
Tuesday  was also a  short slow run day, testing out my calf muscles and Achilles Tendon, only 4 miles covered at a very slow pace, but enough.
Wednesday  I did a shortened off road run up at Neroche Forest, again testing out my injuries, another 4 miles but it all felt OK. It was nice to get off road again, its been a long time since I had been running up at Neroche. We also had a trip out to Trago Mills at Newton Abbot, a very large interesting store with a ‘castle’ theme, complete with wild life and fairground rides and !! a steam train. Always worth a visit. On the way home we called at Darts Farm, the contrast between the haves and the have nots was noticeable!!
Interesting note: my daughter found a large bee on the lawn, looking decidedly weary and not very well at all, she had read somewhere that they need help and the best way is to give them a sugary solution to revive them, so we made up a solution and put it next to the bee, sure enough it started to take in the liquid, you could see it physically taking it in. it soon got up after a short time and flew away!!!! So I learned something today and will do the same again if I find a bee in distress!!!
Thursday we decided on a trip up to Bath, some 45 miles away, even though an early start [8:30] it was very busy on the roads, and we met an unexpected road closure before we got to Radstock, we ended up using a mobile phone Sat Nav to get round it as there didn’t appear any diversion signs.
The Odd Down Park n Ride was very busy, but at least they take our bus passes!!
A pleasant if busy day around Bath, both Mrs Ian B and our daughter went to University in Bath, Mrs Ian B in the 70’s and daughter of Ian B in the noughties!!!! It has changed considerably, [like Lyme] so a good lunch of Vegetarian fish and chips in the Saracens Head Pub [ deep fried Halloumi]
It was just as bad driving home, an hour journey turned into over an hour and a half.
Friday saw me up early [5:30] and driving down to West bay to run part of the Jurassic 10 k route.
The roads were clear on the drive down, and I was parked up by 6:50 am!! By the harbour in west Bay. I kitted up in a brisk but warmish westerly wind, the area was very quiet, the odd dog walker, but as I ran round the harbour to get to the coast path, the tide was in, the smell of fish from the boats and eventually  came to the start of the climbing, up West Cliff, my stride shortened, my breathing increased but I got to the top without walking, On I went passed the large caravan site, it was good to see so many people camped enjoying themselves, I descended down to Eype Mouth, jumping the small stream  before ascending once again up Thorncombe Beacon 155 metres, the second highest peak on the south coast. I admit I did walk a little near the top as it was very steep!!!! 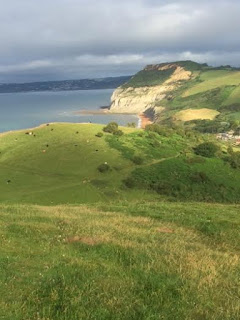 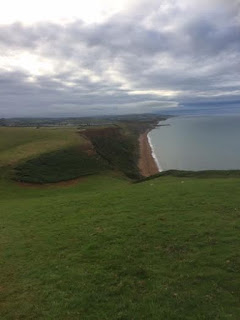 The views from the top in all directions were fantastic, the sun came out as I topped out, I managed to get a picture of West Bay under the cloud shroud and Golden cap in the sunshine [showing why it’s called Golden Cap] only 5.2 miles covered and 742 ft of acsent.
When I got home [ by 8 am] after a shower and change as the weather was nice we jumped in the van and took coffee down to Seaton for coffee on the front, as we walked over the cliff we came across this moth/butterfly next to the path. 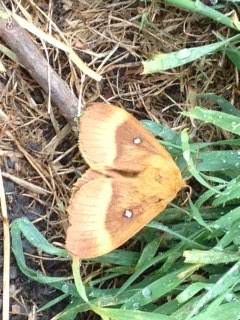 Saturday, Mrs Ian B suggested that we have a trip down to the market at Bridport! And then a visit to West Bay, I think my trip yesterday reminded her! It was a pleasant morning, traffic was busy as we got to the town and made our way to Morrisons to park for free and get coffee before visiting the street market with the stalls selling lots of antiques/second hand/vintage/tat/rubbish !!


A pleasant wander round the town before heading off down the road to West Bay [again] different to yesterday morning, today it was very, very busy!! And we did have trouble parking. We had a picnic lunch on the harbour side in the sunshine, loads of children ‘crabbing’ fishing etc. a good day out and a long time since we had visited Bridport market. 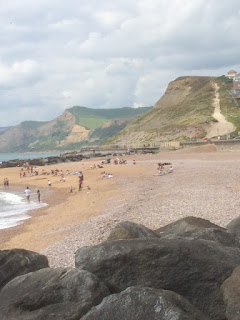 Taken from the harbour side at West Bay. Thorcombe Beacon is the large hill in the distance,[2.5 miles approx]  the race goes up the wide track up West Cliff, you can see and over to Thorncombe Beacon. 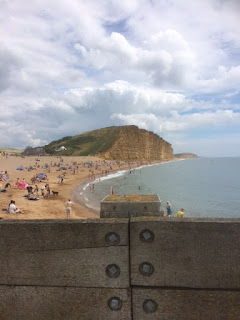 The cliffs on the east side of the harbour, the cliffs were made famous by Reggie Perin and recently in Broadchurch. lots of people on the beach today.

When we got home it was still pleasant and feeling keen I put on my trainers for a run. I went round the lanes heading up Snowden Hill [not that Snowdon] 6.72 miles covered pace of 9.53 and 540 ft climbed. It is sometime since I ran over 6 miles and felt quite good, the last mile or so at a fast pace [for me] of 8.22. So a good end to the day.


Sunday [Tomorrow ] will see me out on the bike again and Monday another trip to West Bay for a last run on the Jurassic route before next week end.
Posted by IanB at 11:22