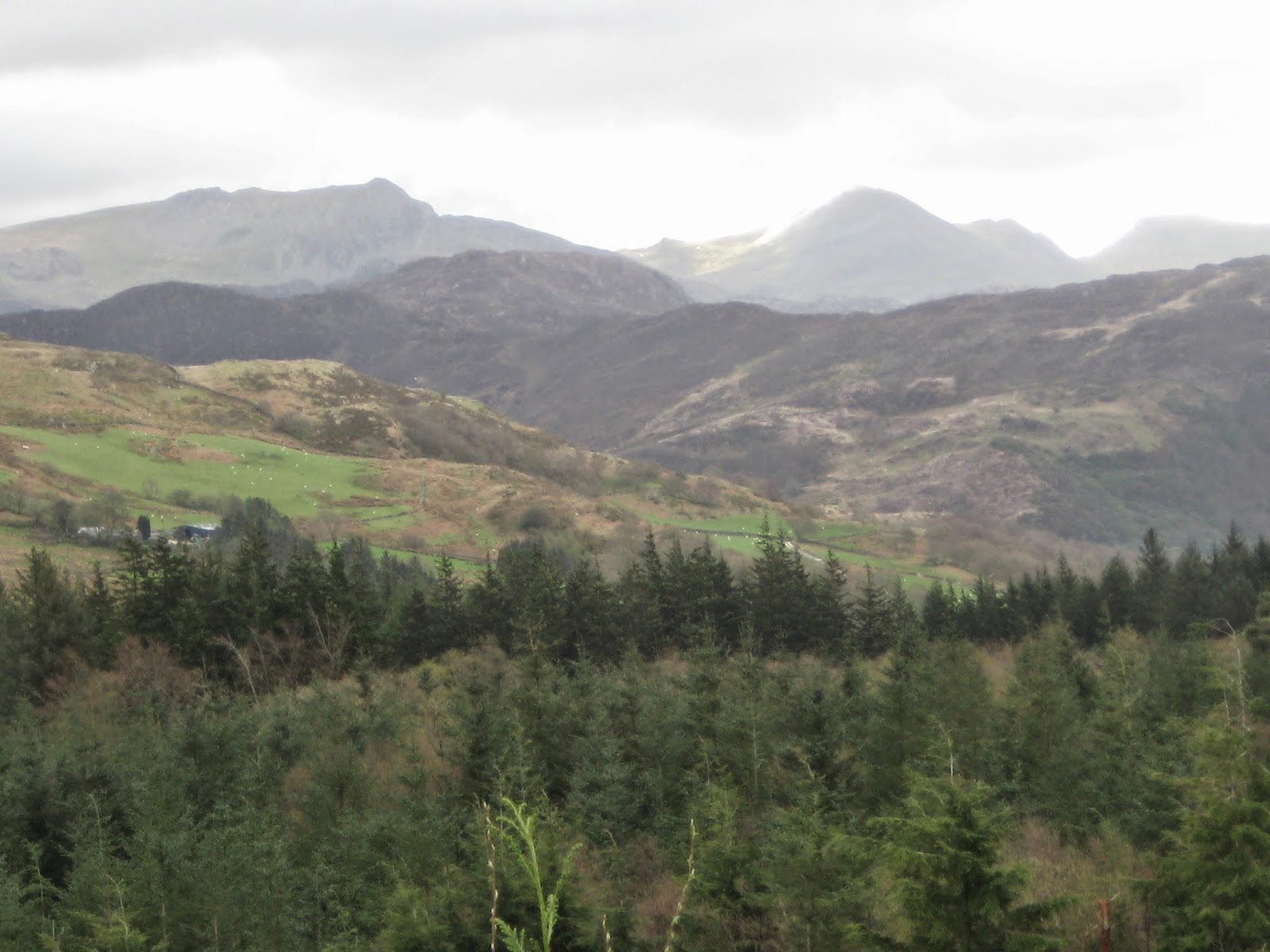 On the way to Moel Lefn looking over Moel Elio 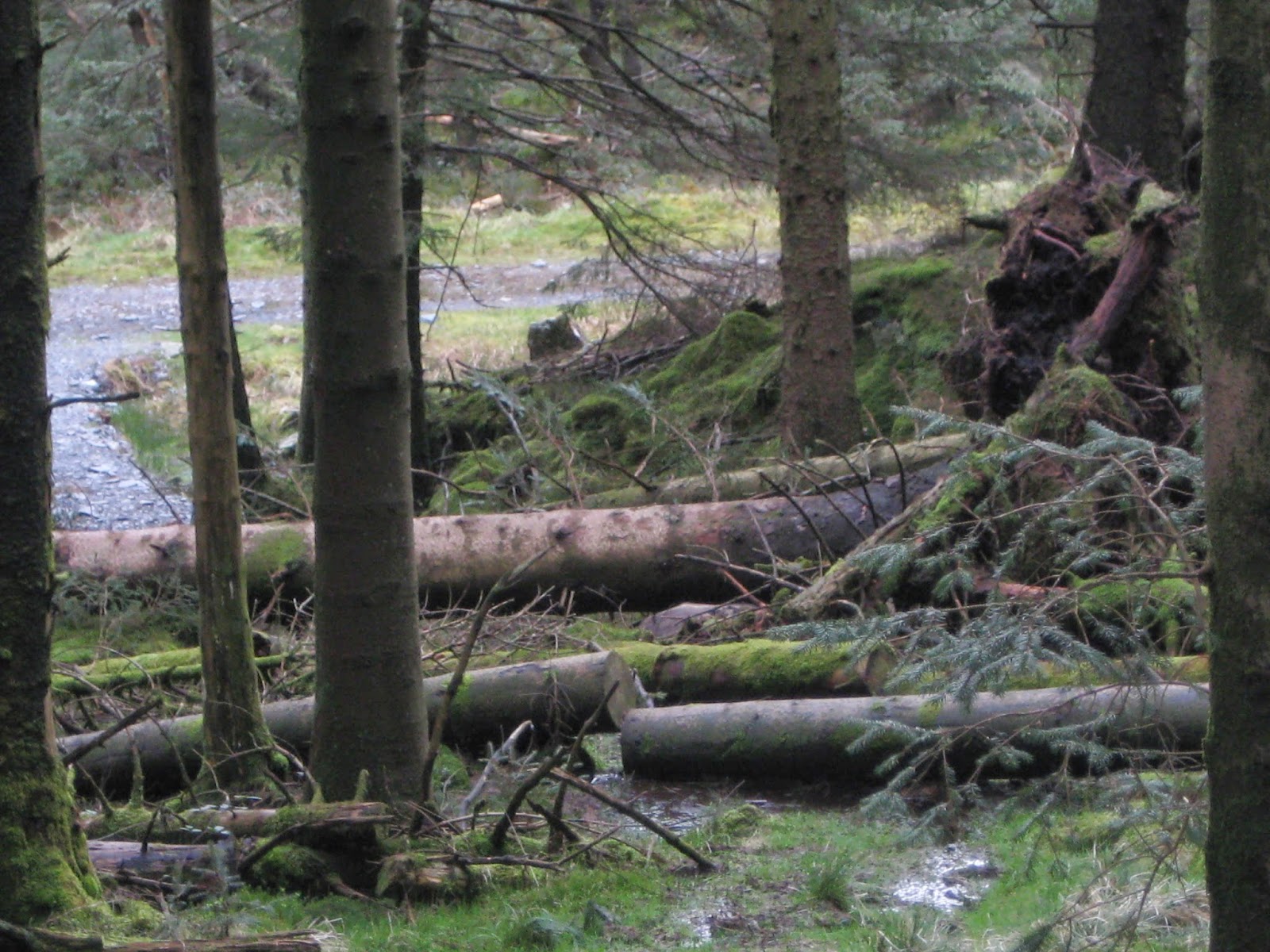 Some of the FP were difficult because of fallen trees 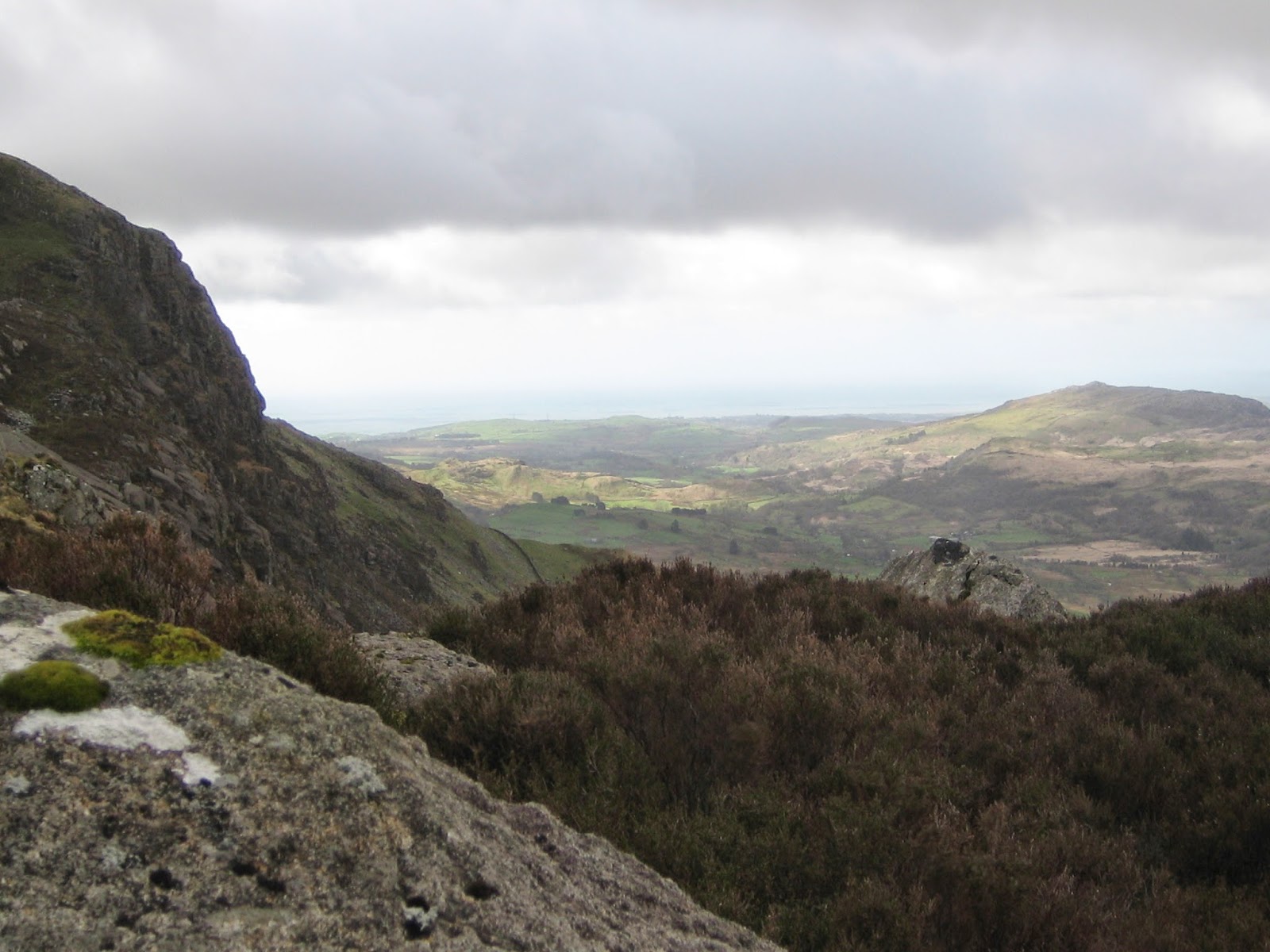 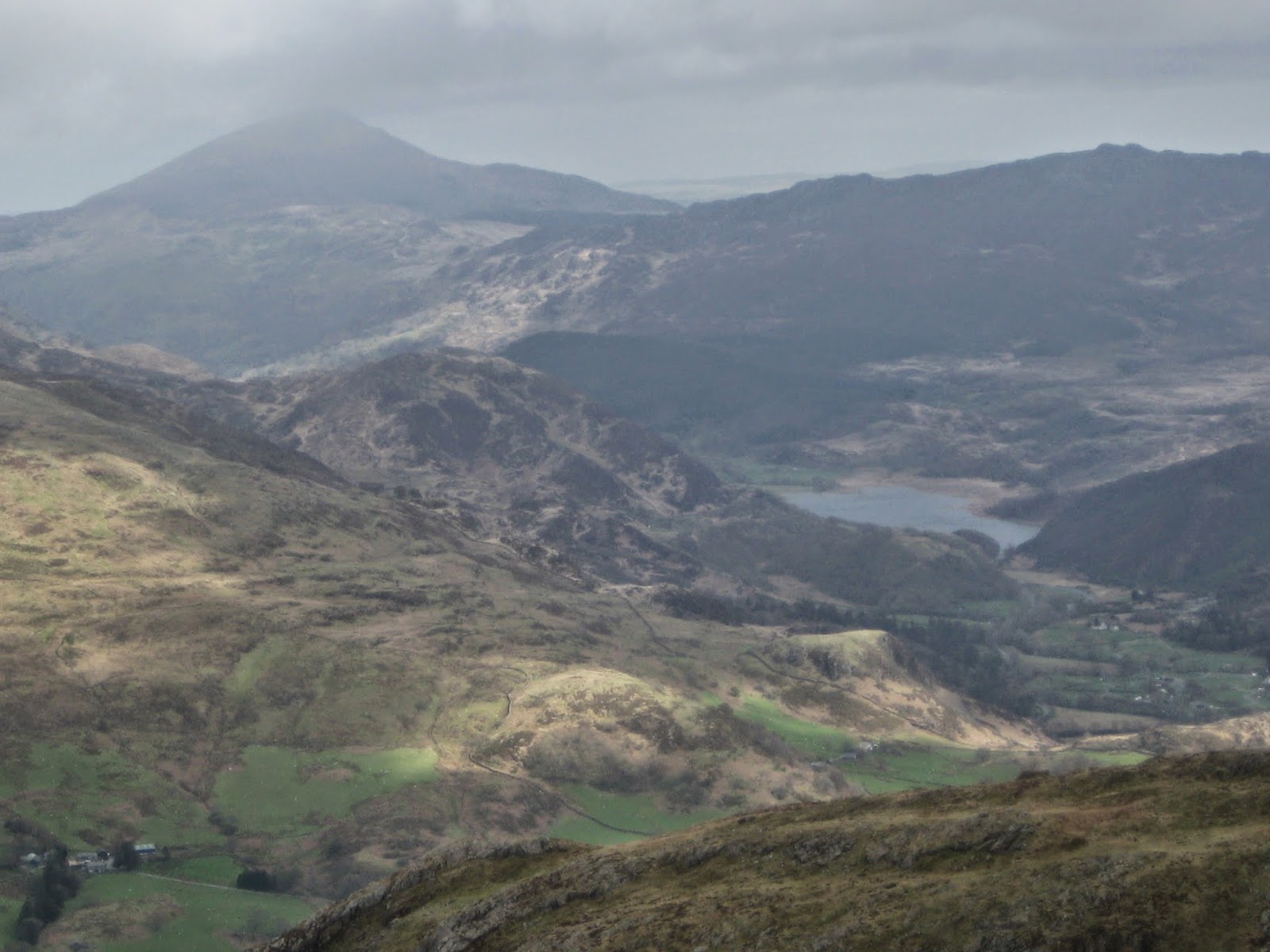 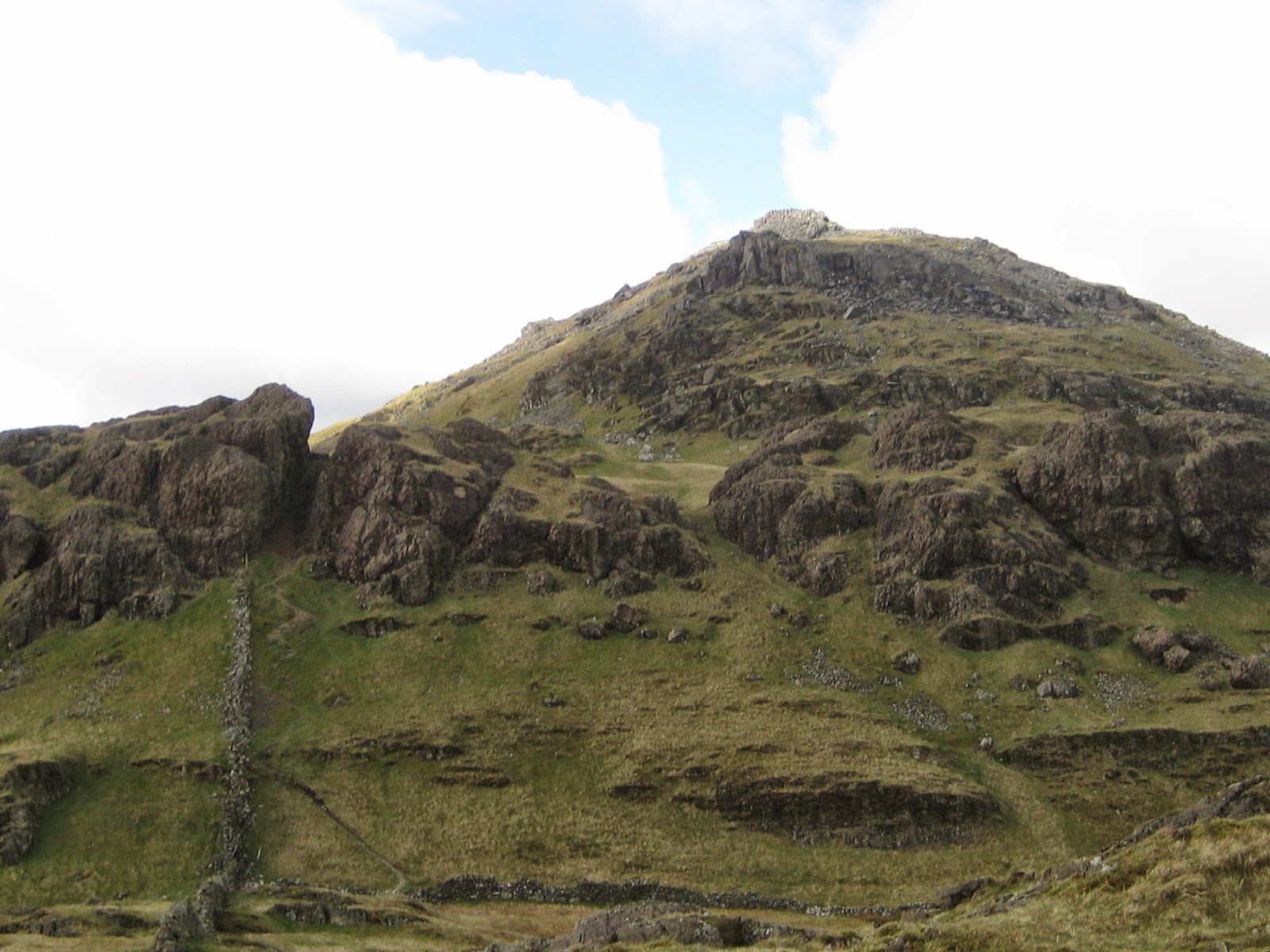 Looking back from Moel Hebog to Moel Ogof 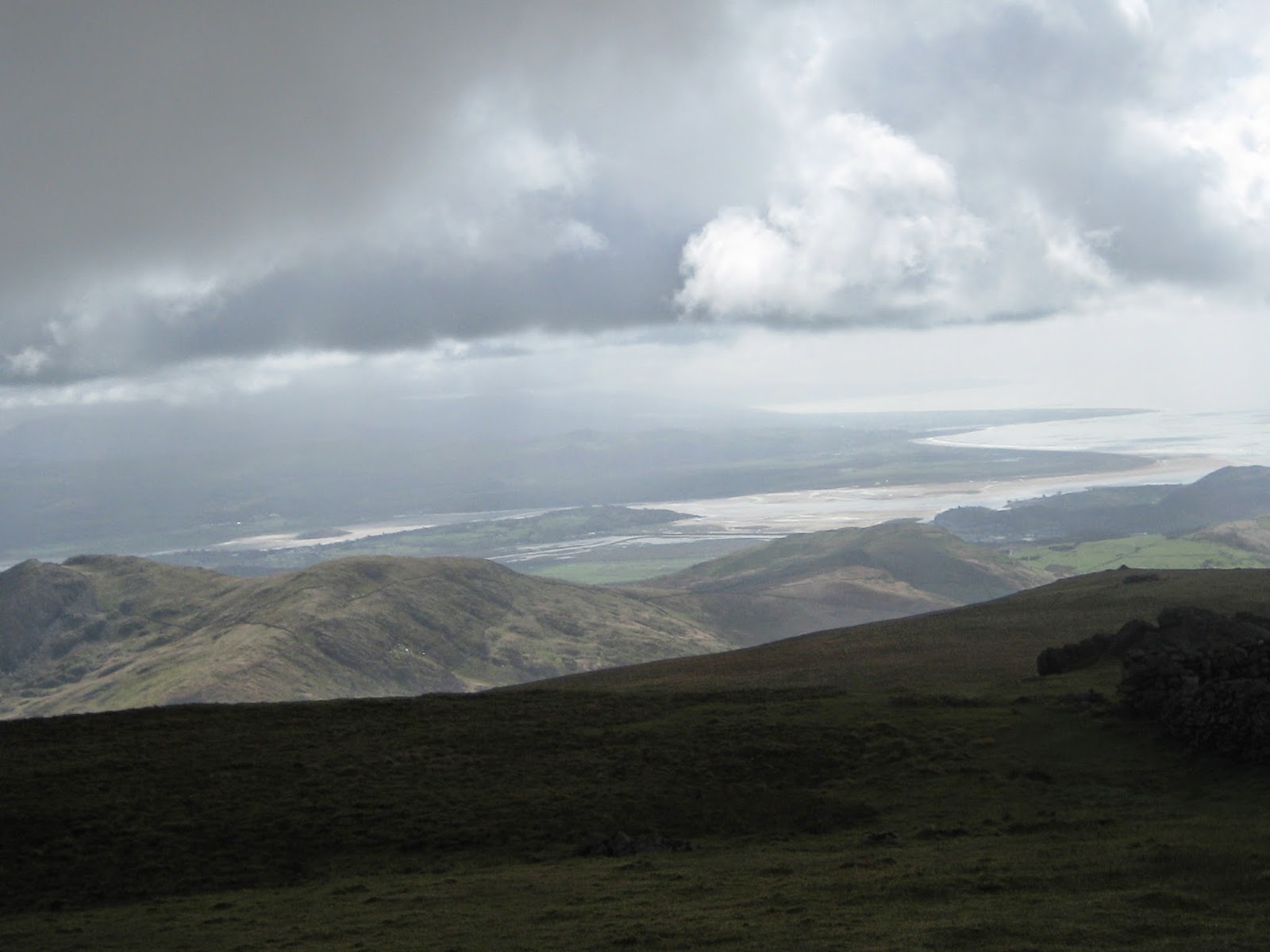 View of Porthmadog from Moel Hebog 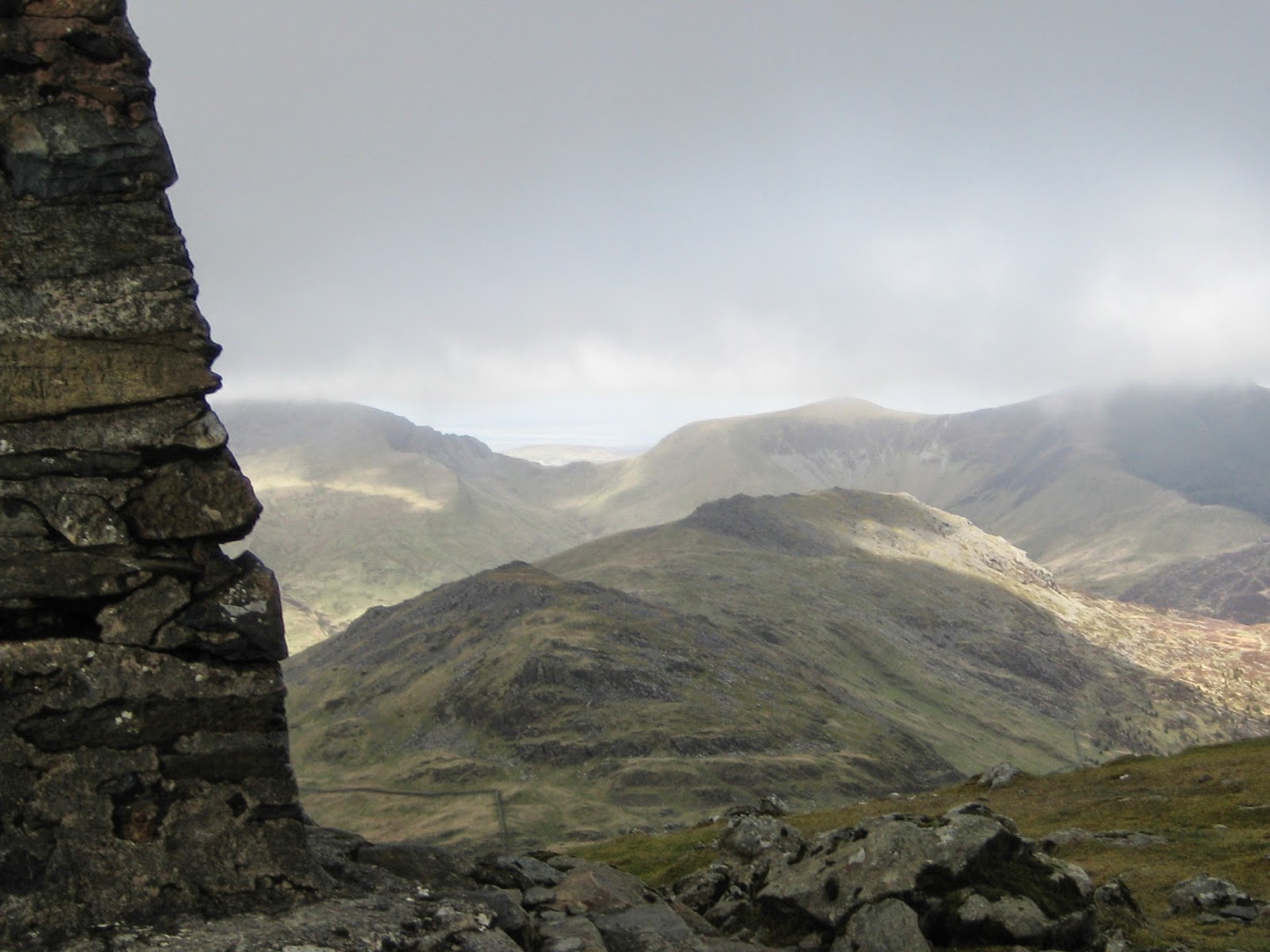 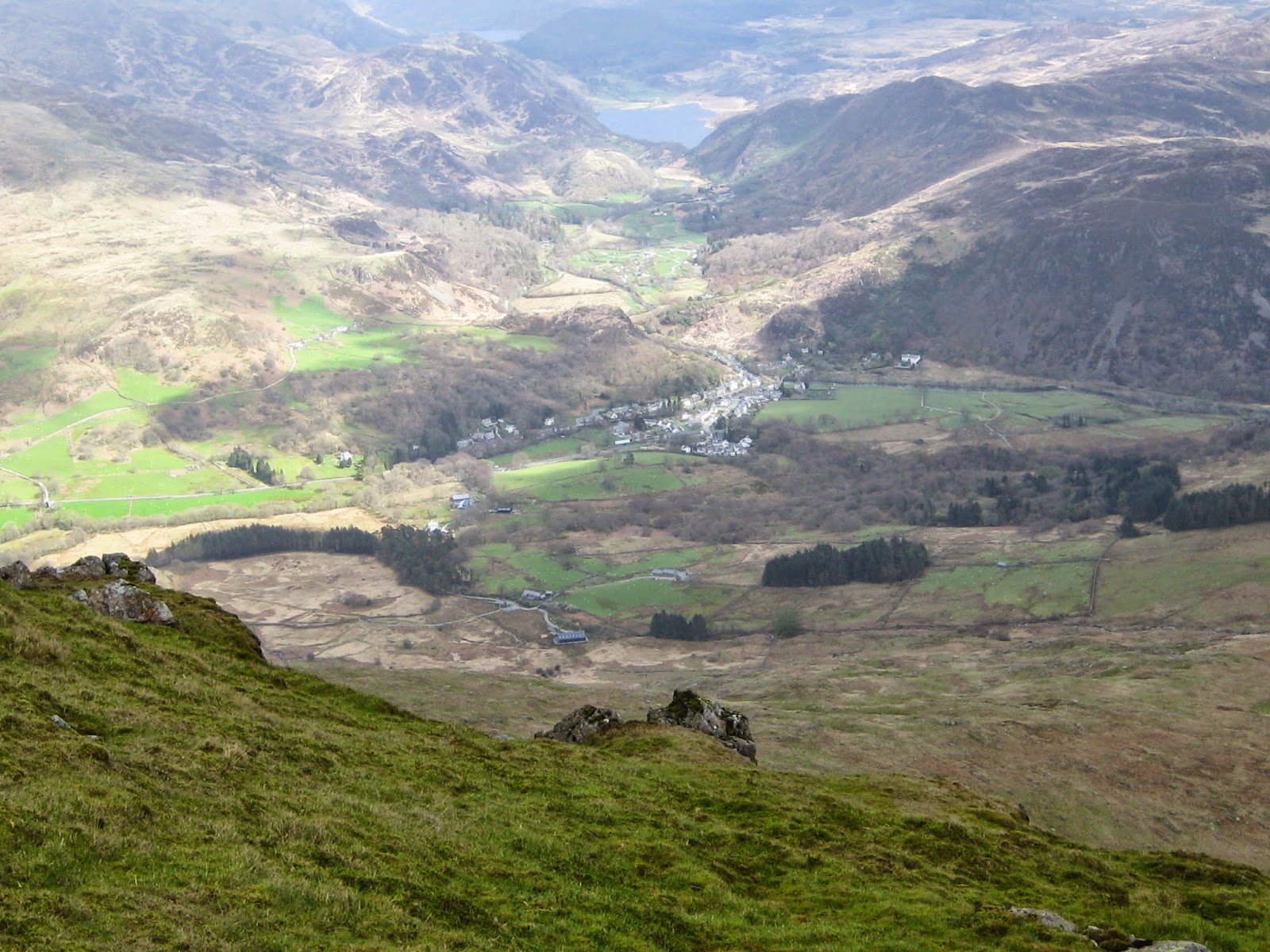 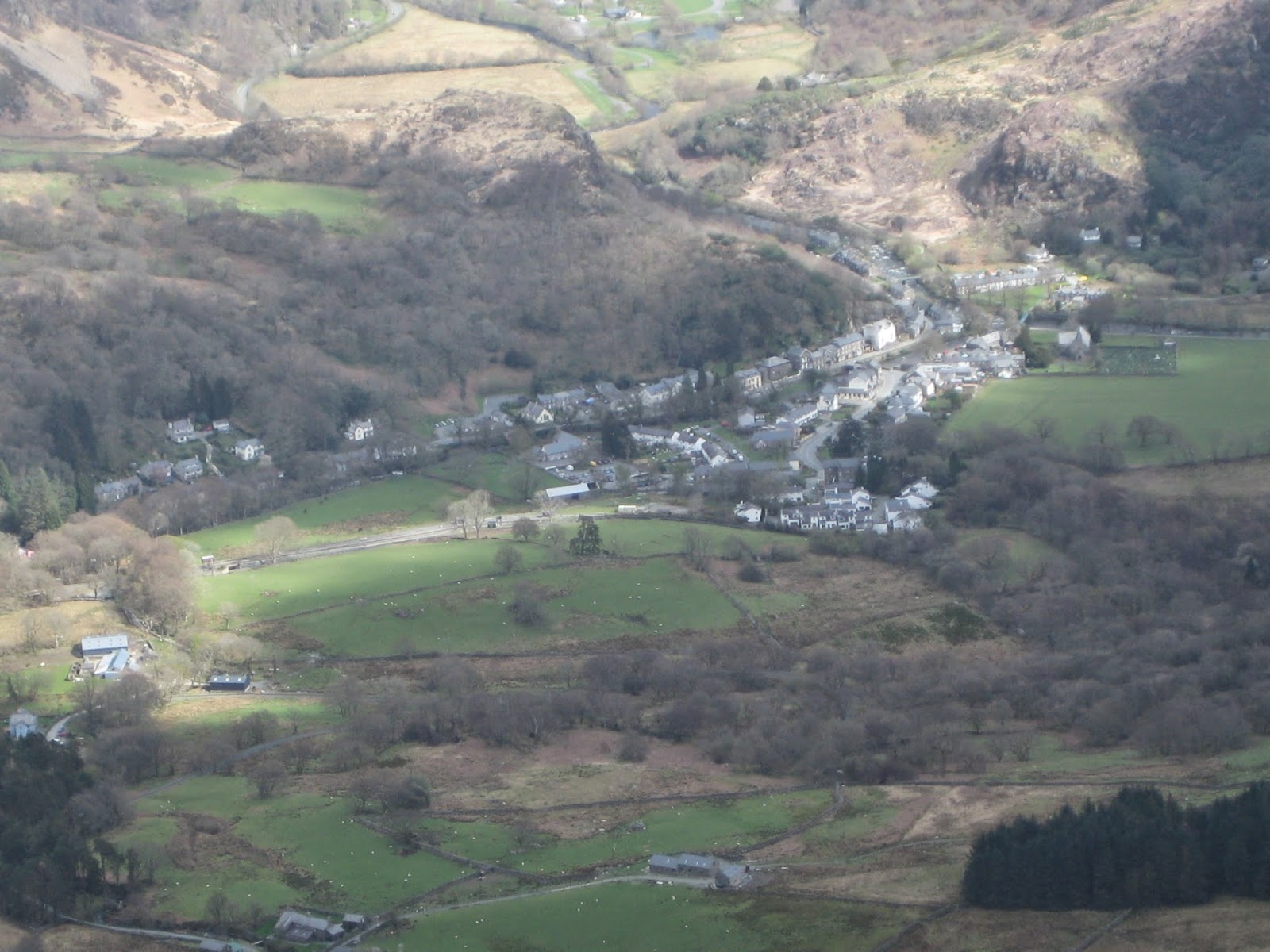 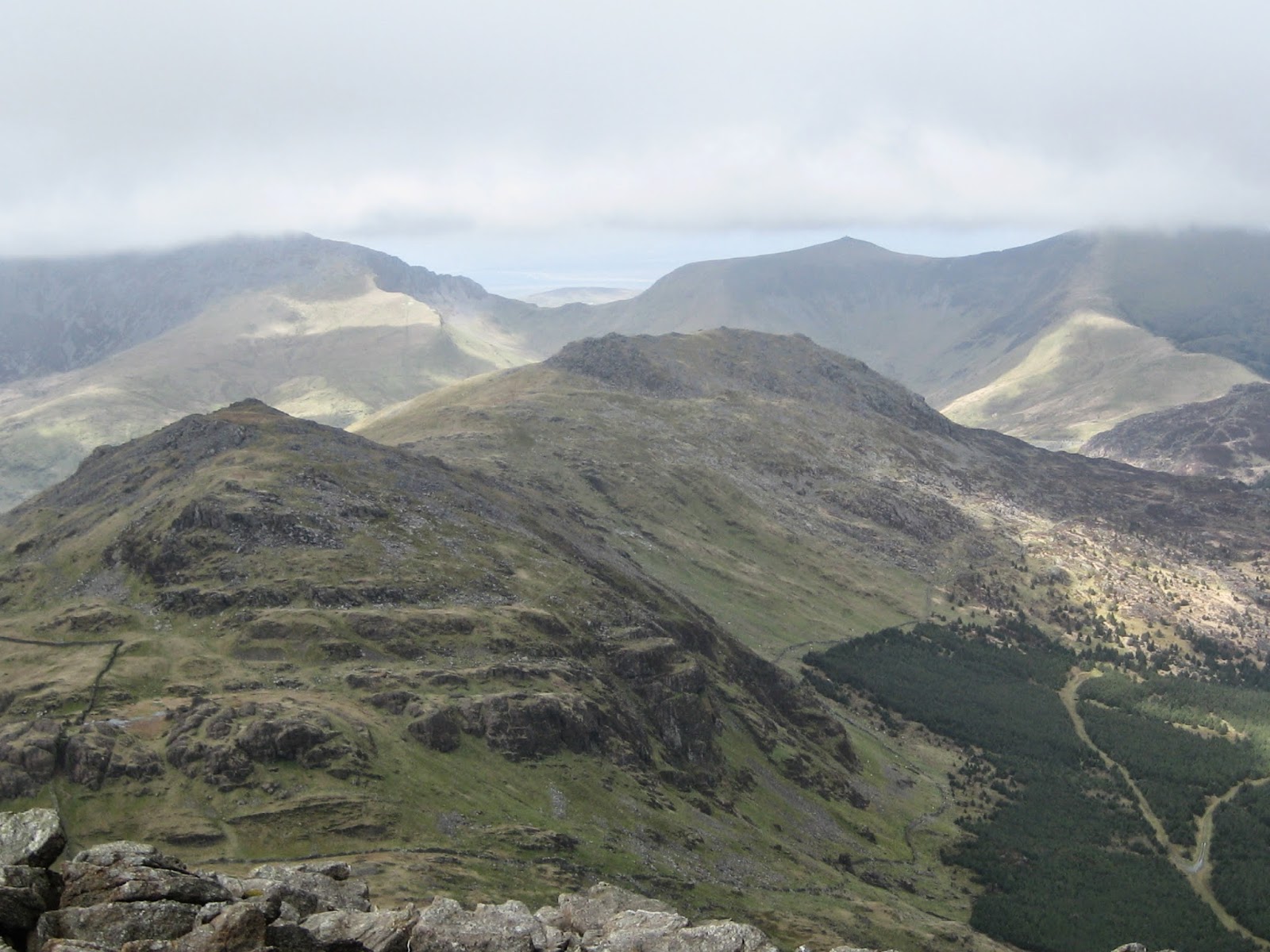 Looking back along the ridge Moel Ogof and Moel Lefn 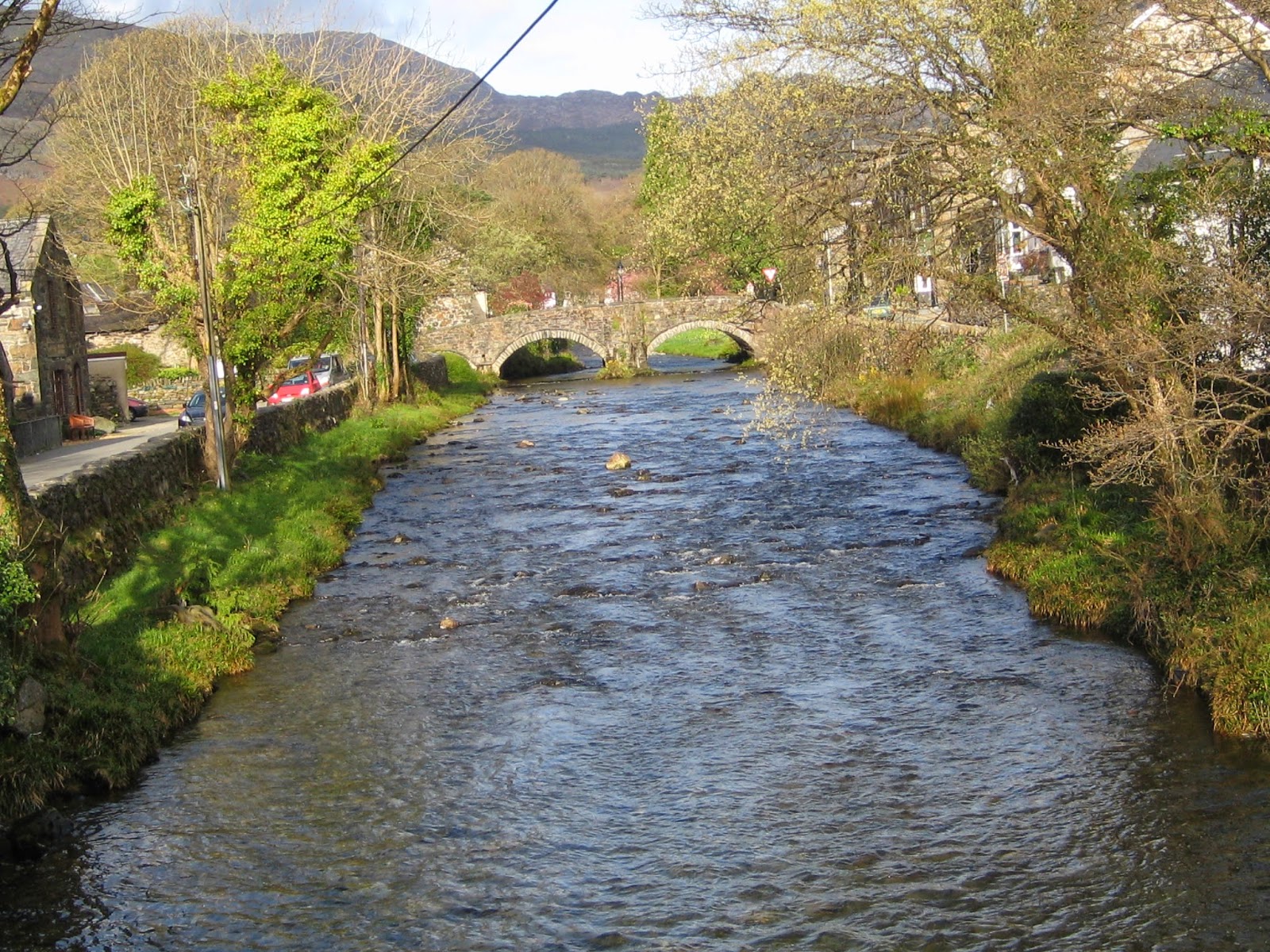 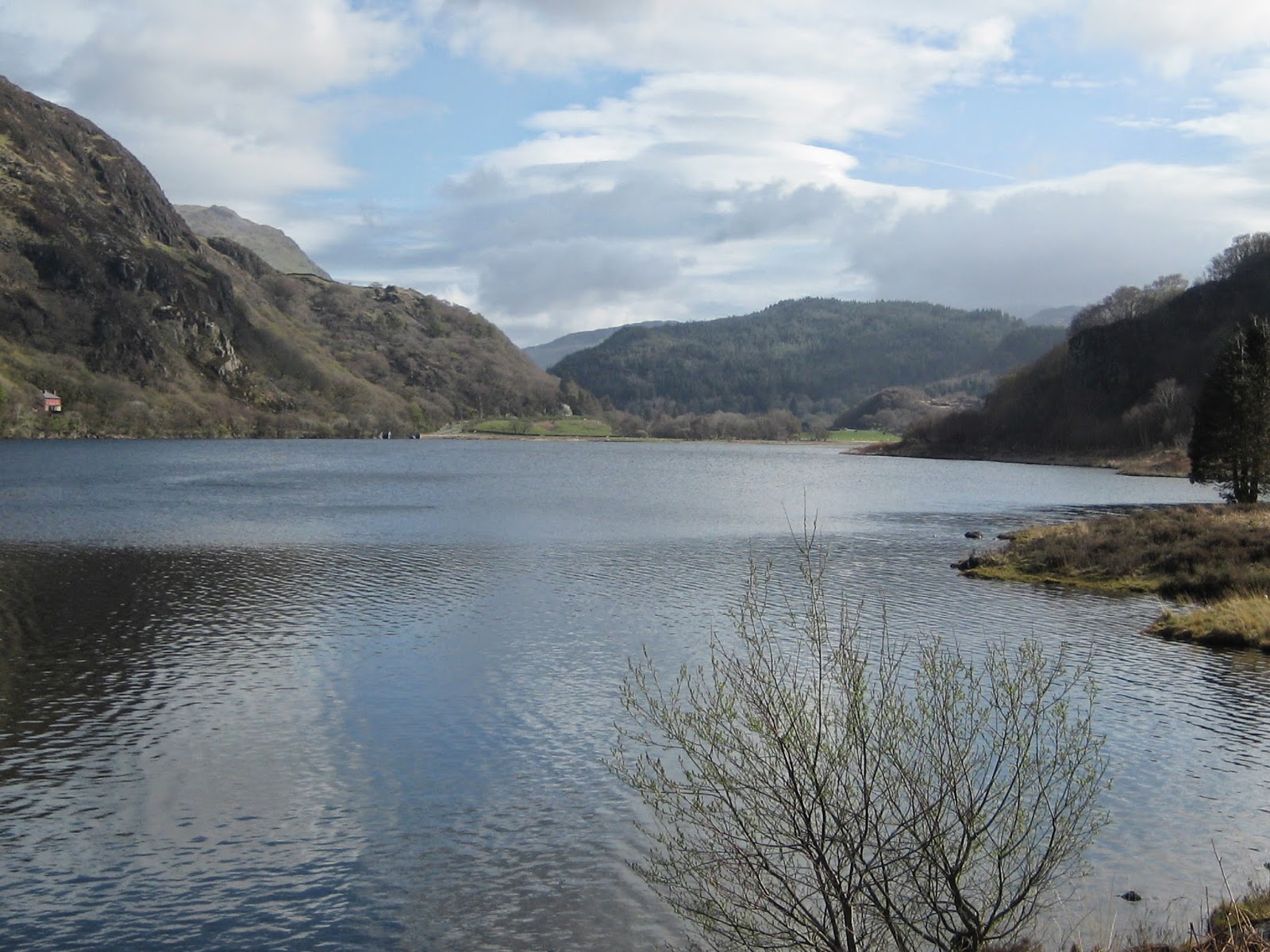 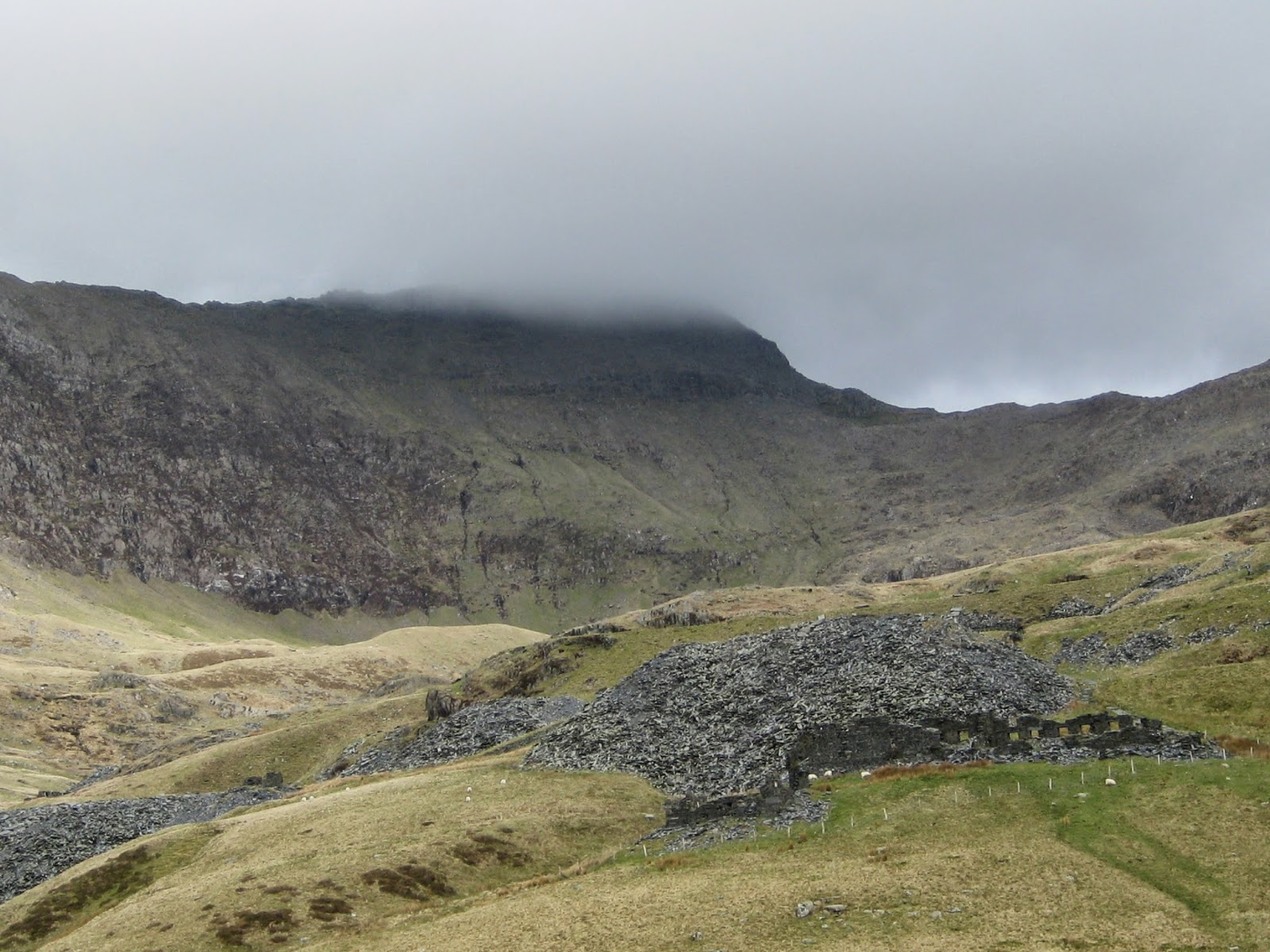 Snowdon in the cloud 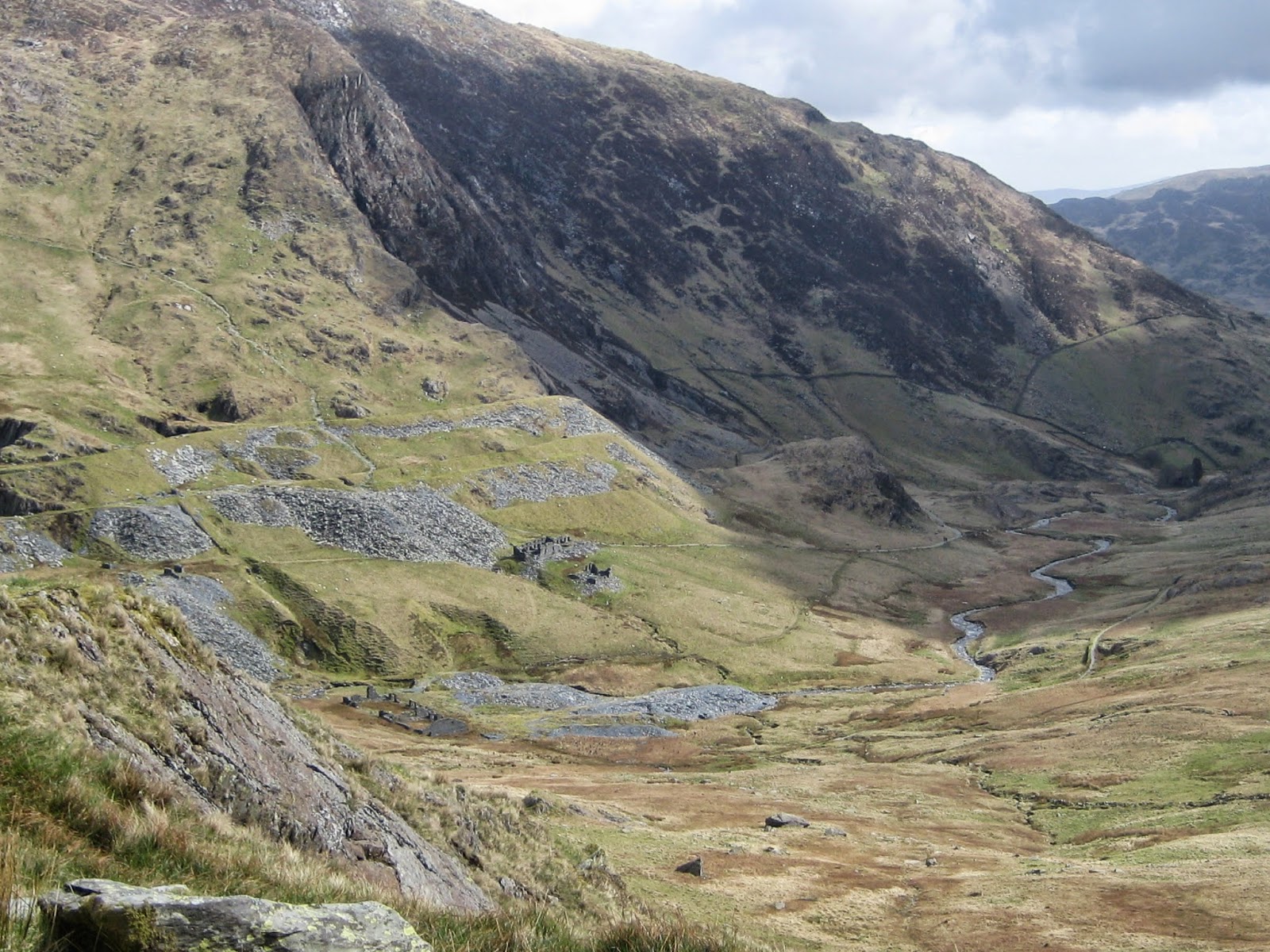 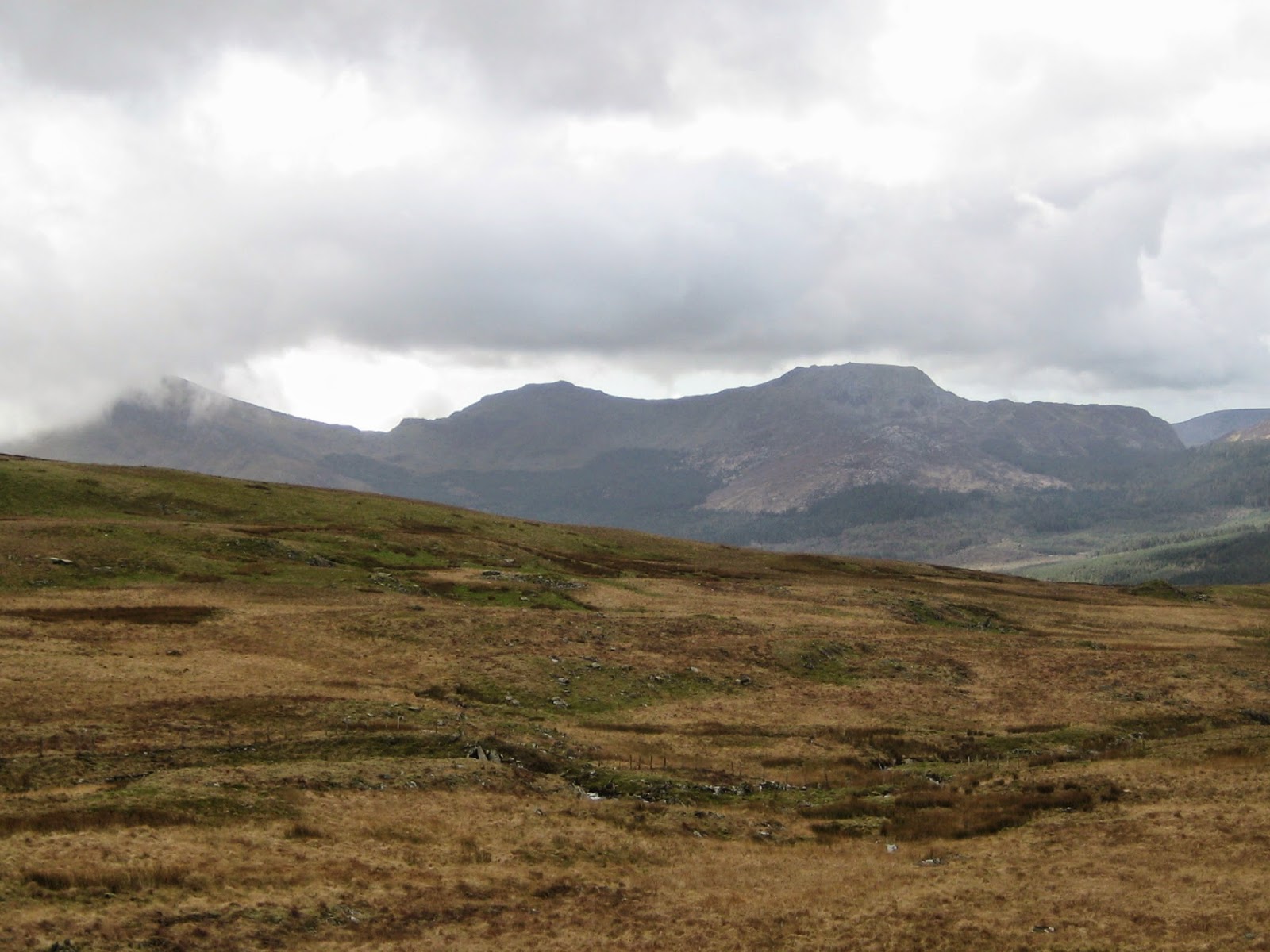 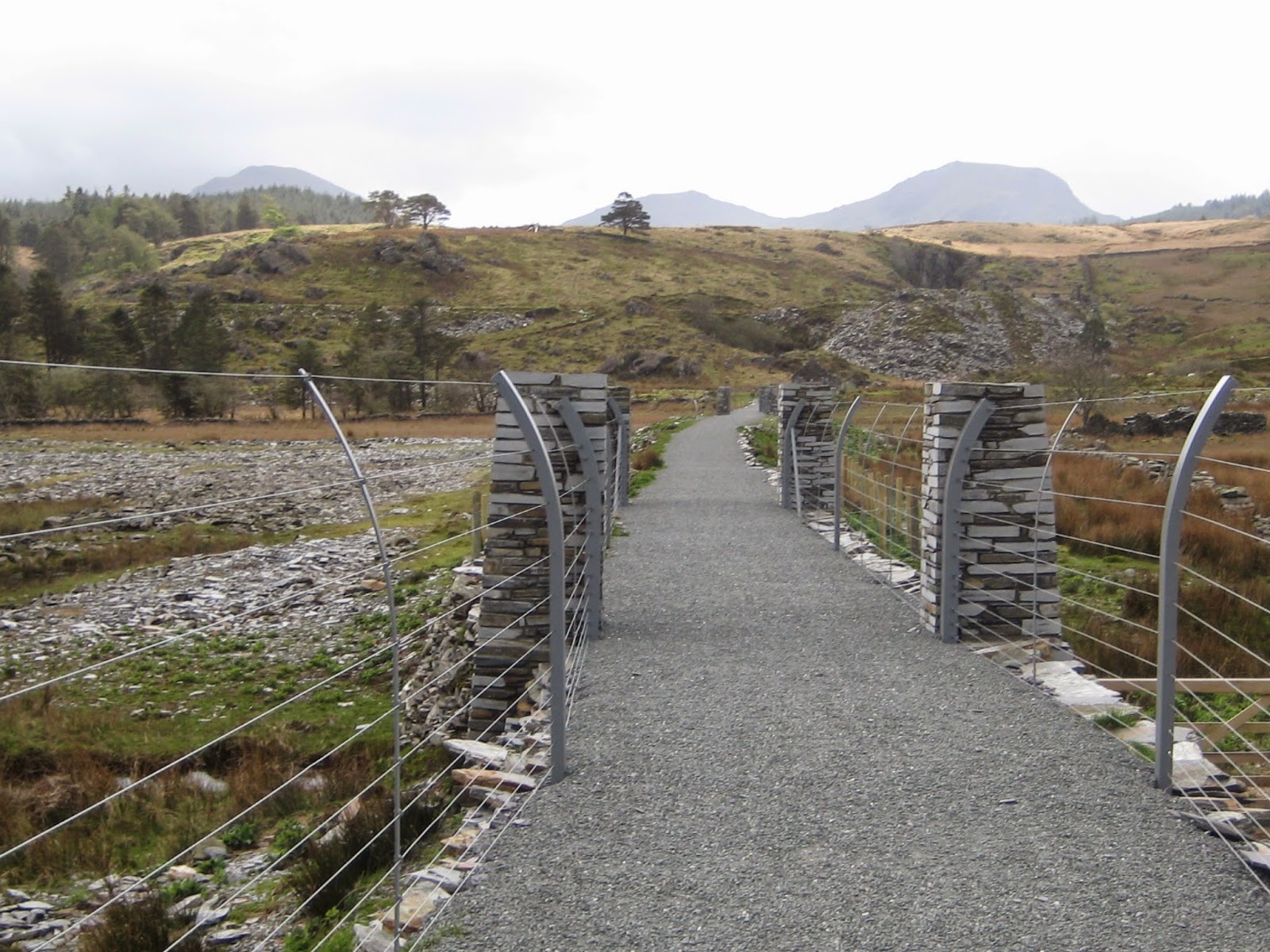 Sterile bridleway from Beddgelert to Rhyddu 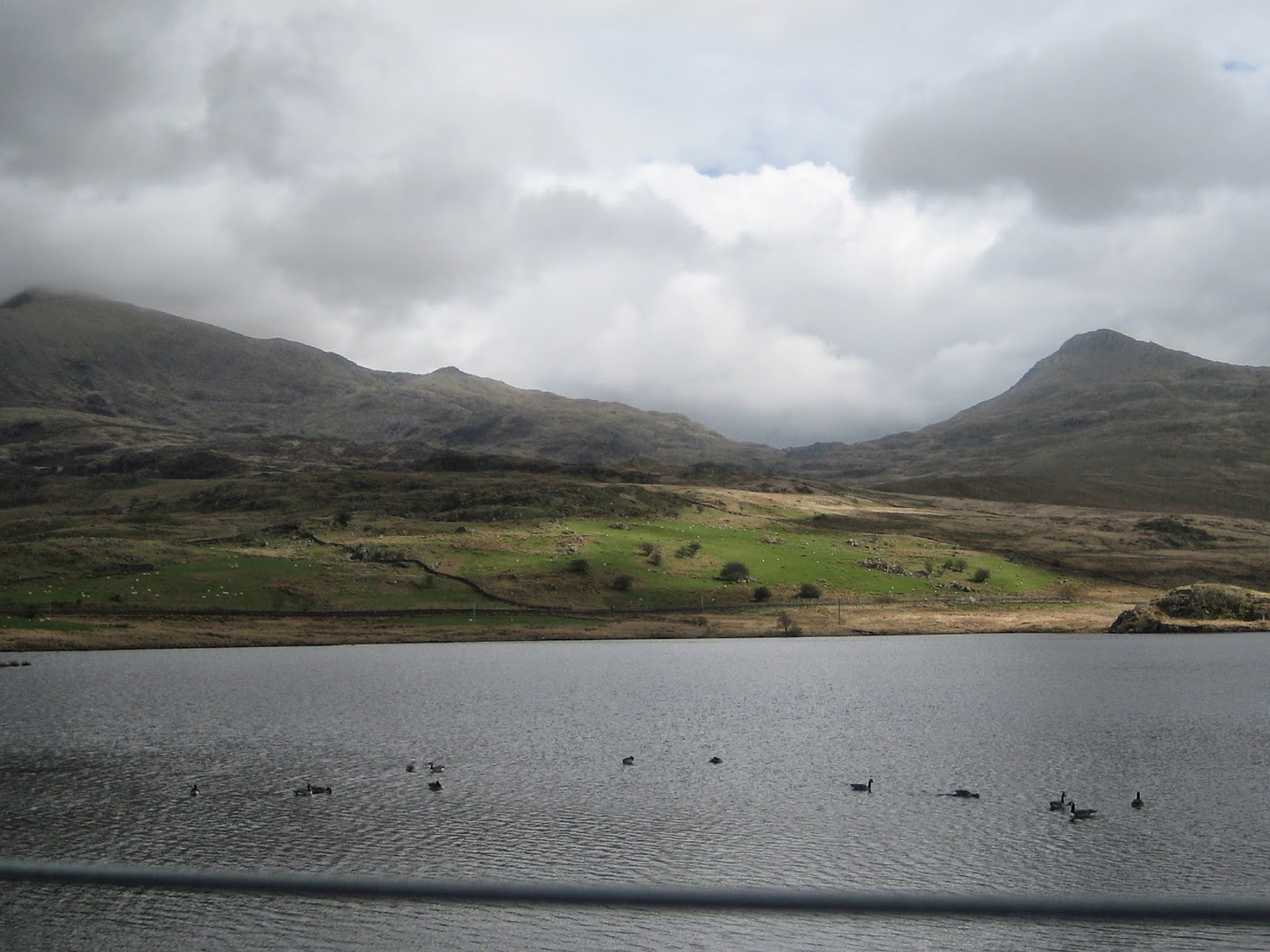 The drive up to North Wales was hard work with the roads being very busy and very heavy rain. After 5 hours of driving to cover the 250 miles I called in Betws y coed to buy a new map as mine was dated 1995! then over the Nant Gwynant pass down to the Forest site at Beddgelert. The wardens were very friendly and helpful, finally deciphering the site map, I selected a pitch out of the trees, dripping on the van can be very annoying! fortunately the pitches were hard standing. it was raining hard and the site was reasonably quiet given it was the first week of the Easter holidays, however more vans and tents arrived early evening. The weather forecast was good for the next couple of days.

Tea was quorn and dumplings in an ale sauce ready meal, cooked in the ramoska, very nice and the van was nice and warm from the oil filled radiator! thanks to electrical hook up.
Tuesday dawned grey and overcast, and cloud was down on my intended peak of the day Moel Hebog via the Moel Lefn and Moel Y Ogof ridge. My first task was to find the path up through the trees which was difficult with many trees damaged from winter storms blocking the climb up. Exiting the forest brought me to the base of Moel Lefn, no sign of any path so a rough scramble through heather, long grass and rocks before reaching my first summit, sunshine kept breaking through, but a sharp chilly breeze reminded me it was still early April, first views of the trip didn't disappoint, (see photos).
A steep up and down route over Moel Y Ogof before a very steep climb up following the stone wall to the summit of Moel Hebog, just as the cloud lifted exposing fantastic views over Porthmadog, Beddgelert and over towards Snowdon, I had not seen anyone all morning, surprising as the peak is close to Beddgelert. I made my way down the ridge and met a couple on their way up, they were displeased as they were at the false summit, thinking it was the top. I assured them it was only another five minutes to the real summit and the trig point.
The way down was steep and loose in places, so careful footwork needed, meeting the newly surfaced Beddgelert to Rhyddu bridleway back to the campsite and mug of tea! late sunshine and the shelter of the forest meant the temperature was very pleasant, enabling me to sit outside. 6.5 miles only covered but a hard walk.

Wednesday was again overcast but, promised to be dry. I planned to walk down to Beddgelert catch a bus over to Bethania and then walk up the Watkin path over to Rhyddu deciding on whether to vist Snowdon cloud level permitting [cant see much point in walking in thick cloud! been to Snowdon summit on many occasions]. I was very early for the bus so my decision was  to walk the whole way. I had a very pleasant walk up the Nant Gwynant, past the Sygun copper mine [looks worth a visit] on a good path, past Lyn Dinas a lovely spot in the mountains. I started up the Watkin path, with several other walkers setting off to climb Snowden, I soon diverted onto the old tramway, which climbs quickly away from the main path. A shepherd was sending his dogs to collect sheep up the mountain side, a great spectacle to watch, the shepherd using shouts and whistles to guide the dogs over the very steep ground, I wish I had their energy and skill over rough ground! A very steep pull up to the col at the bottom of the South Ridge and a welcome break , time for a sandwich and decision time Snowdon or not! the sun came out and it was warm, but cloud sat on the summit of Snowdon, not looking as though it would shift at any time. so decision made, I would continue over the col and down to Rhyddu.
The slate quarry below the col was a testament to the hard lives of those who worked there, the track down was good, easy walking, with good views over yesterdays route, again I saw no one until emerging at the station at Rhyddu. I picked up the path back to Beddgelert, a newly surfaced and very sterile path round Lyn Y Gadar. The path wound its way back through the woods back to the campsite, 14+ miles and 2500+ feet climbed, so a welcome mug of tea, a well earned chocolate biscuit sitting in the sun.

Thursday was going home day, but I wanted to make the most of my time in the mountains so  a run would be nice, despite aching legs from the previous days. I headed down the track to Beddgelert, intending to head up the Aberglaslyn pass and some way up Cwm Buchan and return by the same route. The track after Beddgelert followed closely the river as the train line replaced the old footpath. In places the track was very rocky and lots of scrambling, rather than running, but it made an interesting trip. Reaching the car park at Cwm Buchan I had covered 3.5 miles so decided my turning point would be 4 miles. The bottom of the Cwm was quite steep, but enjoyable running, on a good track. I finally turned at the mountain wall, part way up the Cwm, I think an ascent over the whole Cwm and down to the Lake Dinas would be a good run in future, but too far today. My return run was enjoyable and just over 8 miles covered on return to the campsite, calf muscles ached, but pleased with my efforts.
Time to pack up and drive home, after a quick drive to Llanberis to have a look in Joe Browns and Petes eat.
The drive home was a nightmare with the A5 being closed, at Oswestry, so a long detour and lots of traffic, five hours to get to Grand daughters at Gloucester, normally a couple of hours.
Overall a great trip, first overnight trip in the van this year, now all I have to do is clean the van out!!