Some lifting of lockdown, but! keep on running and cycling

Well there has been some lifting of the lockdown, people are now allowed to travel where they like in England, but not Wales or Scotland ! which I have to say locally has caused real problems as people flock here to the coast in large numbers. The implications for us runners and cyclists are that we now have to dodge more cars and more people trying to keep the 'distance' to avoid any contact, otherwise the last ten weeks will have been a waste of time!! it does make me very angry that people are so inconsiderate not staying local, even one of my friends I notice on Strava drove to Saunton sands to go surfing!! which is a good 70-100 miles, irresponsible in my eyes and unnecessary. especially as the roads were jammed and nothing was open.
Anyway enough of the virus more about running and cycling along with the campervan, sadly I had to charge the battery on the van as it had not been out on a long journey regularly, I daren't go out as locals think you are an outsider giving you horrible looks as though you shouldn't be there! 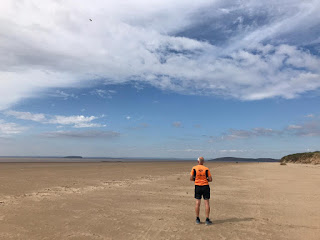 On the beach at Berrow 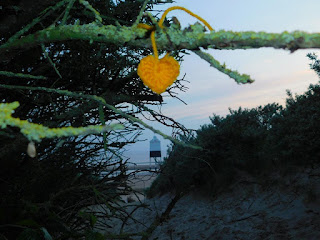 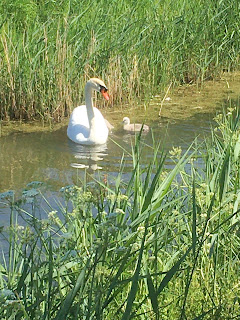 Cygnets on a local Rhyne 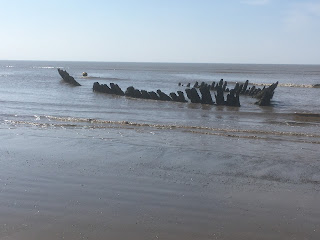 Running wise I have now managed to complete 621 miles or 1000 km since the start of the year, I now need to complete my 1000 miles by the end of the year. I have been running regularly either early mornings on my 10 k route or in the afternoons round my 9-10 mile route that is away from crowds and has some lovely off road sections but! has no hills and over ten miles I can have a maximum of 60 feet! which is probably over the train bridge and up from the beach. Although I did include the ascent of Brent Knoll last week, on my long run, the weather however has been very hot making long runs very sweaty! the wind has been a constant niggle and chilly at times. I did manage a good time for a 10k last week recording 56 min 43 secs which I was pleased with. I have been heart rate running this week trying to keep it down in zone 3, difficult at times when running into the wind.
Although I can now drive the 20 mins down the road to the Mendips, or the Quantocks, I have made a decision to avoid until we are all released and the threat has subsided considerably, at 69 I wish to do everything possible to continue life for a good few years yet!

It is a wonderful area for wild life and over the past few runs have seen goslings, cygnets and baby ducks, sadly I have the photos on my ipad and unable to download at the moment.

Cycling wise I have managed a few rides when the wind has dropped and my 'sore' bum has now recovered!! the roads getting busier each week both with cars but mainly cyclists. I am surprised my cycling fitness is still good although I havnt tried many hills yet, the local Polden hills are not really a challenge and I don't feel at the moment I want to venture on the Mendips and Cheddar Gorge which by accounts is very busy with cyclists and people visiting now we have all been 'let out'
The running club have been proactive in trying to keep spirits up with a daily challenge of wearing a different tee each day you run that matches the colour of the rainbow, to celebrate the NHS along with a runner spotting competition, where you get a point if you see another Harrier and photo them :-) with a league each week . this combined with a weekly quiz via the Face Book page. 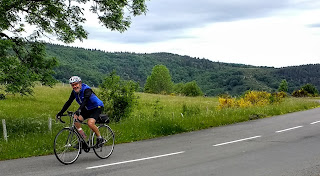 That's brought the Blog up to date, not a lot to say but I am trying to keep it uptodate and also keep a diary of this extraordinary time .