Well what a turn round with the weather!! It’s been a scorching hot  bank holiday so far, following on from a fabulous week of sunshine, very little wind ( for a change). A couple of nice runs this week and a lovely cycle ride with two old friends from Axminster.
Having entered the Herepath Half marathon event at the end of October, I decided it was time to try to build up the miles, so not to be a shock on the day !! So after a great run up and back from Brent Knoll where I ran all the way to the top all 139 metres! Given we only live 9 metres above sea level that’s a good 130 metres and a 10 km round trip, mainly off road, which living in Burnham-on-Sea is as good as it gets .
I decided to follow this with an outing to the Quantocks, given the weather was set to be good for the week, I was lucky in that I picked a day before the really hot weather began.
I was on my own and after negotiating the traffic heading for Hinckley point power station, parked up in Holborn village car park, still very early at 7:15 am, I was the only car in the car park.
I geared up with my Montane Gecko Running sac, spare long sleeve vest, windproof( no rain forecast ) buff, gloves, plastic bivvy bag , two bottles of drink, one a nice Montane squishy bottle and several ‘naked bars ‘ pea nut flavoured, these are my bar of choice at the moment with 149 calories and 15 grams of carbs! I did have a map, but don’t really need on the Qs’ folding glasses and my iPhone ( for photos) I haven’t carried a sac for a few weeks so it did feel a little heavy, however the clever Gecko sac makes it all very comfortable.
I had three quarter tights and my new ‘Raidlight’ running vest, which has pockets! And as I discovered a great material in hot weather, very pleased with this vest! I was using my fell raiser shoes as I was looking for a good 12 miles today over rough ground.
I set off walking up Hodders Combe, a nice introduction to the run, crossing the stream before ascending a steep climb to the ridge of Longstone hill leading to Bicknoller Post, there were spectacular views around, the sun was just appearing from behind cloud, but the cool of the morning meant it wasn’t too hot. Great views down over Minehead, before I pressed on to Halsway Post and Crowcombe Park gate on the main ridge. Crossing the road I ran along the drove, which in the morning air was wonderful, I hadn’t seen a soul yet, even though I had done an hours worth of running. I felt comfortable, keeping my pace down, the focus on ‘comfortable running’ keeping my heart rate down also. When I reached Triscombe, decision time whether to go for Wills Neck! I decided as it was getting hotter and I would cover twelve ish miles anyway missing WN would not be missed .
I turned to run along a path next to the road, a well used MTB track down toward the turn for Quantock Farm. This was a nice bit of single track running!
I entered the plantation and took a track off left down to Quantock Combe which would eventually bring me down to Great wood.this is where the long climb back out of the Combe begins, on good forestry tracks. I turned off to a steeper path at the bottom of Rams Combe, that would finally take me to Deadwomans Ditch. I walked a lot, and only ran if it was ‘easy’ emerging at DWD road and a short snack stop. Here I saw the first people of the day after about 8 miles of running. I then headed towards Dowsborough fort before peeling off to descend Lady’s Combe and the lovely Halfords Combe with its many stream crossings etc 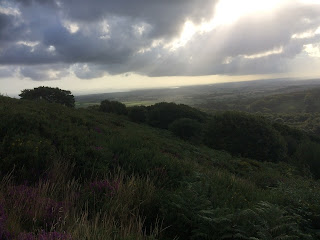 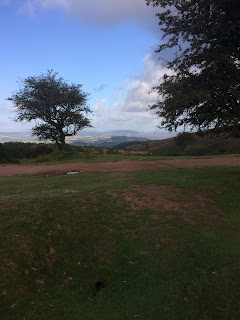 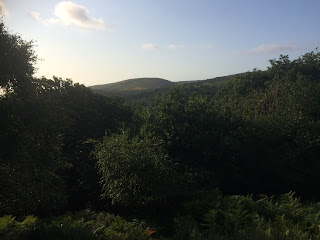 I really enjoyed the run down the Combe, and soon Arrived back in Holford and the car. 12 miles done, really pleased, I felt good and could have done more. A great morning out😀
Posted by IanB at 06:25