Wednesday 5th December
Last Sunday saw myself, daughter and her boyfriend driving the few miles  to Brean Down, the lump of rock that is the extension of the Mendips. It was the Brean Down Santa challenge, I had only entered the 5 k but daughters boyfriend was down for the 10k. I decided that from sea level one circuit up and down would be enough, rather than the two required for the 10 k. There was a cold damp wind blowing off the sea as we collected numbers and Santa suits ! There were soon nearly two hundred other souls lining up for the run dressed as Santa!!  We were soon off and I was surprised how near the front of the field I was! As we hit the first hill probably about 25% I managed to run about three quarters of the climb, amazing thinking about my lack of hill preparation, although I did run up the down a couple of weeks ago. We came out to work our way up to the summit trig point, running into a head wind which contained some very chilly rain, but!! We were protected from the elements by our Santa suits, we then descended down a step muddy track to the old fort at the end of the down, I was still feeling good, my off road shoes giving good grip compared with those with road shoes,sliding their way down!! We then headed back along the service road climbing and descending steadily throughout, before the final 25% tarmac road descent on green slime surface, I felt I had a bit left so put in some effort to the line, worth it as I came 10 th out of 88 and 1st in the over sixties( there was 5 of us) there was no over 65 category.! Just over 32 minutes, very pleased with my efforts,nice medal and hot coffee and cake from the NT cafe whilst we waited for daughter boyfriend, he came in 2 nd place in  the 10 k in 50 minutes, fantastic achievement, we were well pleased to wait for the presentation to see him get his trophy! Great event lovely run, cold and damp, but! Who cares.managed to download a few photos 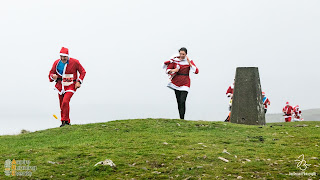 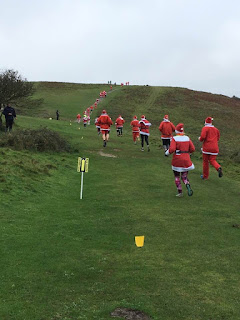 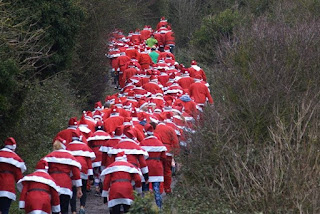