Grizzly training or training for the Grizzly

25th January 2017
After my Thursday run and feeling very tired, Friday was a rest day, but! Saturday was another beautifully sunny but frosty day so I couldn’t resist getting out for a run, my 7.5 mile route I did on Thursday but, it’s incredible how the body and mind changes within the space of a day or so. I felt I ran really well, setting a good pace and finishing feeling good, much better than Thursday!!! What is it??? Food, rest, motivation, mental approach? Who knows?

Sunday looked a promising day, but the forecast was for severe frost, a quick text to cycling mate Mike that it would be slippery in the morning, but the afternoon was looking good. It dawned very cold and frosty, so me and Mrs IanB made a coffee, sorted some shortbread and headed down to Seaton for coffee on the front. The front was quite busy, many people enjoying the Winter/spring sunshine, now quite warm as there was no wind. Avocado, tomato and cheese toast  for lunch before kitting up for a ride out over the levels with Mike, the temperature according to the Garmin 5 degrees, but! As we got to about 3 miles from home the temperature started to fall and t was down to 2 degrees by the time I cycled into the drive. 31 miles covered on a cold, but dry afternoon. The roads were quite clean compared with ones of previous rides.

Monday was long run day, Quantocks or coast??? I went for the coast, I took the van as a changing room, it was frosty and sunshine as I left home, but as I got to Axminster the fog crept in, staying until I was parking up at Seaton, then it was a miracle, the mist started to lift as I kitted up and set my watch. By the time I left the van it was brilliant sunshine, but! Freezing cold as I jogged along the front, I started to climb out of Seaton over to Beer via Seaton Hole, It was quite warm in the sunshine, but as I hit the dips the temperature plummeted. 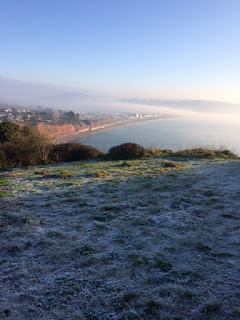 View over a cloud lifting Seaton, frost on the grass from above Seaton Hole 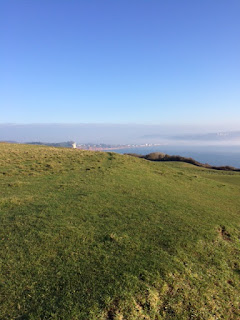 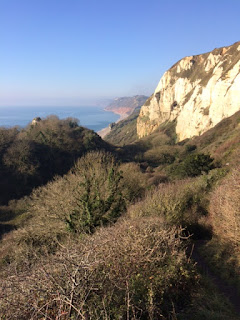 Half way up the Stair way to Heaven 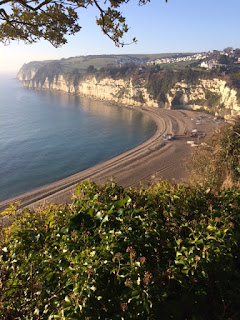 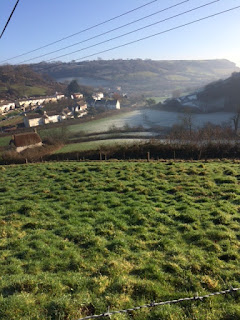 Branscombe from the school 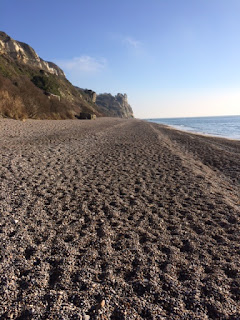 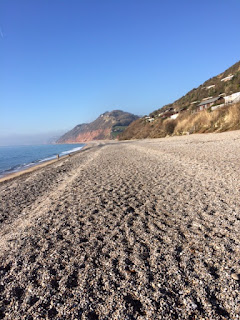 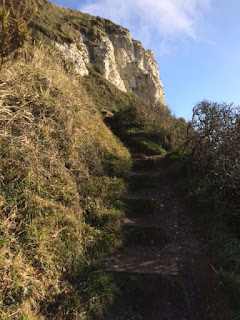 Looking up the Stair way to Heaven 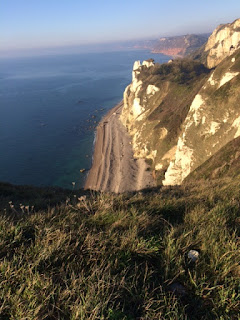 looking down to the beach from Beer Head

I walked up out of Seaton Hole, the views at the top of the cliffs stunning, down into Beer before climbing up again to Beer Head, views were outstanding, however, the ground surface across the fields was now melting making the running surface quite sticky. Over Beer Head to Branscombe down through ‘seaside’ before running up the Grizzly route up through the village. There was a large group of walkers, booting up as I got to the bottom of the climb to the school, I met these later on the cliffs, it was a very large group [more later] I walked up past the school, a handful of jelly babies’ as I went along with a  swig of my energy drink.

On to Hole House before the steep path over to the Fountains Inn, now very muddy. Down to the Fountains before a slow plod up to the cliffs above Branscombe, here I met the large group! Lots of ‘excuse me’ as I ran past in the rough grass, it’s good to see people enjoying themselves out in the sunshine.
Down to the beach, time for more energy food as I walked along the shingle beach. I did run some of it!! Nice to get back on firm ground, even if it’s up hill, the shingle is like marbles!! The Stairway to Heaven was soon reached, a definite walk! The sunshine in the sheltered spots was quite hot, hopefully summers coming. Down the road over to Beer and the last climb back to Seaton, but there is a steep little path called ‘Clintons’ which at the end of the run does make the calf muscles  pull a little [a lot actually] last bit down the road and through the park 12.13 miles covered .

A well-earned coffee, Christmas cake before changing and home to a sandwich lunch. The afternoon was spent driving off to Wellington to train a School Crossing Patrol.  A really good day, a good run, a sore toe and tired legs but I am 12 miles closer to the 19 miles needed to complete the Grizzly.

Wednesday was ‘Wobblies day’ a very frosty morning, with clear blue skies once again. We delayed the start to 9:30 hoping the temperatures would rise sufficiently to melt any frost on back roads. Five hardy souls headed down to Bridport and Washingpool Farm, as last week’s ride. The roads were dodgy as we cycled down to Winsham, but the sun was at least on some roads and making it much safer as we progressed. After Winsham, the roads were good, if wet and dirty, making cycling in line a dirty position to be catching the back wheel splatter. Washing Pool was the usual high standard, Dorset apple cake and tea again for me. After lots of banter we turned to head for home deviating through Shaves Cross and up the steep and long Bettiscombe Hill. We started to doubt our choice of route as the roads were plastered in mud and muddy water, bikes were taking a hammering!! The lanes back through Forton were also a challenge as there had been hedge cutting leaving lots of debris on the road, unfortunately one of the group succumbed to the ‘puncture fairy’ only 2 miles from home. A lovely ride out, weather wonderful again 32 miles covered. Just got to get 2 more runs in this week, but probably only 7 to 10 miles.