Plymouth 10k and a run on the Quantock hills

11/10/16
Today was a contrast to Sunday! I drove over to the Quantocks at 7:00 just as it was getting light, well, it would if it hadn’t been for the thick mist on my drive through Taunton. My aim to run 12 miles across the Quantock’s as preparation for the Here Path Half at the end of the month, 13 miles with lots of climbing!! More later ???
Back to Plymouth 10k  - it was my daughters second 10k and she had put in lots of work for the event after Taunton, despite a heavy workload in her job as a Primary Teacher. I had spent the time since Taunton 10 k getting out a couple of times a week for 6- 10 miles round the lanes, as well as some Bikeability at several village schools. The weather has been really good lately, even with a chilly easterly wind. But I am finally in long trousers; last week’s Bikeability was a little chilly in the morning.

Mrs IanB and I were booked into a Plymouth Hotel for Saturday night as daughter and her bloke were also staying over, but our plans for her to have a night in a 4 star hotel were thwarted when my son and the grand children came down for the weekend for the local Carnival on Saturday night. So after a busy day looking after the twin boys whilst mum, dad and Gdaughter went shopping in Exeter I drove down to Plymouth on my own and checked into the already paid for room. A pleasant evening out in Plymouth with daughter and boyfriend, at the ‘Wildwood restaurant’ Pizza etc.
The dawned beautiful, sun and no wind, a lovely day ahead. The start for the event was close to the hotel so we could stroll down to the start at 8:30 just in time to warm up. There were over 2000 runners involved and street in the town were closed off.
We lined up mid-way down the crowd and we were soon off, trying not to get caught up in the rush, it was good to be in the middle of the runners of all shapes, sizes and ages. The weather was just right for running, no wind and at times it was a little too warm. The run was down one side of the road and back up the other side, but we ran along the picturesque embankment, with good views over the river. As we approached the 5 k mark we could see the leaders going the other way, daughter’s boyfriend included, he was clearly doing a good time! We felt good as we hit the turn and it inspired us when we could see all the runners behind us. There were several long slopes on the return from the 5 k mark and we found ourselves walking just to gather breath and take on board some water. We were soon on the final descent before the final climb to the finish so an extra spurt was needed. 1hr and 5 minutes!!!! That’s a minute faster than the Taunton run, we were pleased with that! We came 1600th out of 2100 so a good finish. Daughter’s boyfriend came 26th so a good run by him at 36 minutes, the winner did 32 minutes. 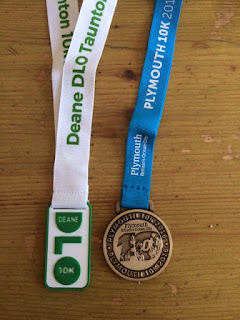 A really nice medal [compared to the plastic Taunton one] see photo, a goody bag and tee shirt. A good day out in fantastic weather. I got home in time to spend an hour with the grandchildren before their return up the M5 to Gloucester.
In contrast my run across the Quantocks started in thick mist and a cold easterly wind, in a long sleeve jersey, Gilet and a hat! The run up Wills Neck was chilly the mist finally clearing as I dropped down to Triscombe stone, it was starting to warm up and as I ran my usual Dead woman’s Ditch the sun felt quite warm. It was interesting running along the side of the road, as people were driving to work. The ground was very dry  throughout the run, I had applied DEET around my legs as a precaution against Ticks as I was brushing bracken and heather.


On the return I walked up Hurley Beacon and managed to snack on jelly babies  and for the first time washed down with flat coke [ the first time I had tried this] I still felt ok as I had run over 7 miles and hitting 10 miles before my final climb up to Wills Neck , I walked in places, the wild ponies completely disinterested in this mad person running!! I got back to the car, 11.63 miles covered in just over 2 hours, the weather was a fabulous with great views all around, it had been a few months since I had been on the Qauntocks , I will certainly revisit as soon as possible, perhaps on my MTB!!!!
Posted by IanB at 11:29