2 weeks on from Ex to Ax

Wednesday 15th April
What a difference a couple of weeks makes!
I wrote this a few days after the event, intending to publish on my blog!!
“It’s amazing how the mind and body adjust after a big event a few days after. The pain and difficulty of the event starts to fade, I have done a couple of spinning classes this week, it loosened my legs and at the same time made them ache, I think I tried a little harder, pushing the resistance as I felt it was my legs that let me down last weekend, not my fitness. This week knowing the Ex to Ax was behind me. I haven’t done any running and have done no cycling other than 2 days of Bikeability.
My mind has come round to thinking maybe I would like to do it again, it was a long hard event, but! I did enjoy the challenge and would like to improve on my time – so I may think about entering again despite my last post that I wouldn’t!!!
I know what I missed and that was long hours on my feet either running or walking.Fitness, spinning is good for that but I need more distance and more hills in my legs, I also need to sort my food and drink, I thought I had sorted it but! Changed on the day (idiot!!), and carry less, rely on resupply. The Grizzly run was good at the beginning of March, just right for the Ex to Ax at the end of the month, but I need longer miles on my feet over the winter, I did about four longer runs over the four weeks before but! That wasn’t enough as it was interspersed with six – seven mile runs, which need to be extended and perhaps two longer runs at the weekend, or one in the week and one at the weekend.”
Its now 2 weeks on, I have only run 6 miles but cycled over 200 miles because it was the Easter holidays. Getting back into cycling was hard at first, but now feel I have my cycling legs back, preparing for the round the Isle of Wight Randonee which is 75 miles [even though it says its 100k!] on May 3rd. 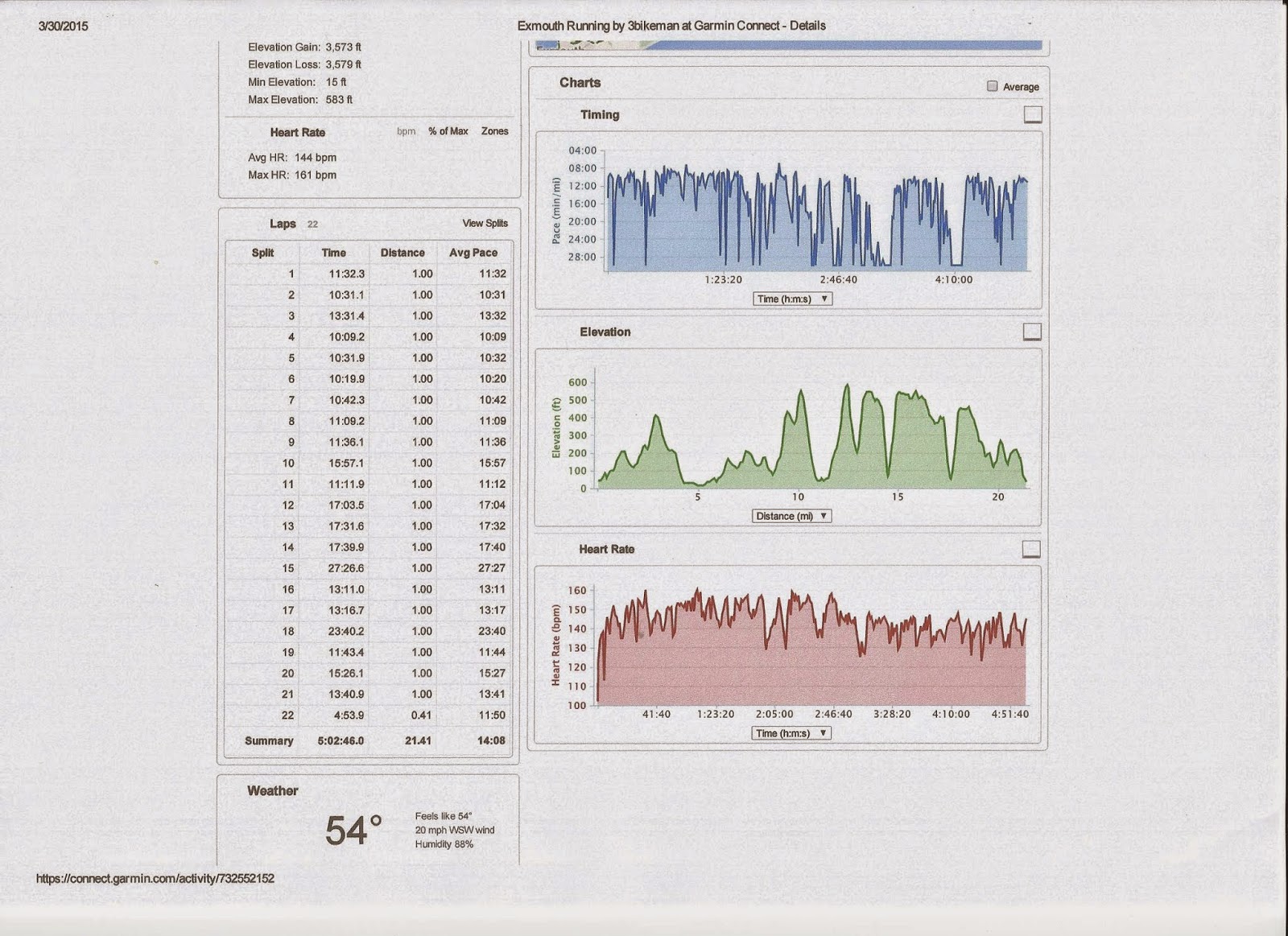 Some stats from my watch on the Ex to Ax

The furthest ride I have done over the last two weeks has been 50 miles,so building up nicely. My Hamstring tendonitis still niggles, particularly when driving.
The weather has been fantastic, and Bikeability this week positively hot, spinning last night was a challenge as it was so hot.
I am entered for the 5 tors event on Sunday on Bodmin Moor, which is a great event, but after no running for two weeks will probably DNS, plus I am going to the Bike exhibition on Saturday in Bristol so cant get down to Bodmin till Sunday morning, a little late.
One final bit of news is that my son Tim and his wife are expecting identical twins! In October so that’s exciting news.
I started this blog at the start of 2014 the intention being to record my training for the Ex to Ax that year, sasly we didn’t run in the end, but 2015 we did.


Campervan news is sparce at the moment as have been busy with other things, I hope now spring has arrived that we will get out more, same with fellwalking, I hope I can get a week away soon in  North Wales and perhaps a few days in the lakes in the summer.
Posted by IanB at 22:10