5th May 2017
Tuesday a 48 mile ride over Athelney in a cold northerly wind, trying to build the miles for my French trip, riding day after day approximately 50 miles a day for 15 days will be a challenge so I need to try to do back to back rides.

Wednesday was Wobble day, 8 of us again headed over the hills to Beer in East Devon. We started the day with a climb and big descent  followed by a huge climb past Stockland to the A30, fortunately it was a short section before turning off, the temperatures were now rising, especially after the climbing, a fast ridge ride before many ups and downs through Southleigh, beautiful views across the valley, and hedgerows full of bluebells and garlic. Some very narrow steep downhills had us on our brakes and all times. There was a final climb up to Hangmans  Stone, according to the map it was 15% before a long descent down to sea level, ‘Duckys café’ on the beach at Beer, below the cliffs sheltered from the northerly wind we were able to sit outside for our coffee and cake or in some cases egg and bacon baps! It was a steep climb out of Beer, we were starting at sea level! Over the back lanes to Colyton and then on past Shute house the National Trust property and through some lovely lanes again to Kilmington, saying cheerio to two members of the group, it was a hard route back with a fierce cold headwind over Membury and Bewley Down, 42 miles covered and nearly 400ft climbed with a head wind for the return journey, a hard ride.

Thursday was a rest day, so a bit of gardening and a trip to Exeter to pick up a couple of items for my trip, Chamois cream!!! For my behind!! I expect it to be sore. A lovely lunch out made a very relaxing day.

Friday a 32 mile round North Curry, again a chilly grey day but it was a good week with 142 miles covered?

Saturday, a trip to Gloucester to spend the day with the grandchildren, Gdaughter was dancing in Gloucester so we took the twins down to see her performance, it was lovely to see her and felt proud to be her Grandparents! We had a great day before heading back down the M5, very quiet for a Saturday evening. I spent the rest of the evening preparing for the Audax on the Sunday.

The weather forecast on Sunday was for a cloudy day with a northerly breeze, but as I was packing the car the sun was shining, and it was getting warm! Even at 7:30. What to wear? Long or short? Top and bottoms? I took both deciding to sort when I got to Minehead.
I packed my usual fruited tea cakes with jam! And several Fruisli bars and a trusted bottle of tailwind energy drink. The drive over to Minehead was lovely in the morning sunshine.
I was early as usual, parking easily, a cup of tea went down well before collecting my Brevit card for the day ahead. It was still looking good for the day, weatherwise, so I went for shorts, short sleeved jersey with arm warmers and a gilet, knowing I could take off layers if and when it got warm.
9:30 came as we rolled away from the centre, the sun was shining, a little chilly in the wind but this would change as we climbed the toll road up out of Porlock, this road was stunning, a good angle, as it climbed switch backing with horseshoe bends, the surface was excellent, no traffic and very quiet except for heavy breathing cyclists and birdsong! The views across the bay were stunning. I found the climb easy even though it went on for several miles, but compared to the main A road it was easy!!! 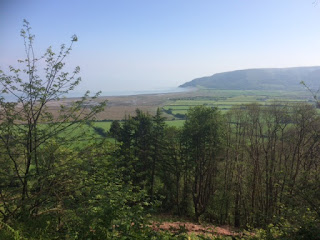 View from half way up Porlock hill Toll road, across Porlock Bay  A lovely climb

I eventually topped out with fabulous views across the moor and out across the sea, I heard my first cuckoo of the year as I sipped a drink before the next section across to Exford, which is a switch back road that has a sting in the tail with a sharp dip with a 15% exit. The descent to Exford was long and fast to the first check point and a welcome snack. It was sunny, but still chilly in the wind. It was back uphill over to Simonsbath, I was overtaken by several inconsiderate riders who cut me up as they passed!!! I was riding steadily enjoying the sunshine and the Exmoor countryside. Simonsbath meant another long climb out up to Kinsford Gate, I remember the hill as being long and steep, as I cycled up the Hill I was caught by a rider on a nice handmade Mercian, it was Dan from Tiverton and as we climbed we chatted about frames, cycles etc. making the climb go quickly, we were now over the top the views were really vast over the open moor, very little traffic and we seemed to be on our own with the other cyclists either ahead or behind us.

The descent to Dulverton was really steep, and my Garmin showed 60kph + with some sharp bends, I was glad to see the bottom and cycled to the next checkpoint at the pub on the bridge. It was time for some lunch! And a short rest. Over half way now and one final long [ 10k + ] climb ahead .
I was now able to ditch my arm warmers, and gilet as the weather was now warm, even after the fast descents. I worked my way along the valley to Exbridge, still in the company of Dan chatting as we went.
We approached the A396 road and started the climb up to Wheddon Cross, the road was undulating, but continued to climb for 10k plus, never at a difficult angle but ensuring you had to work. This was not helped with the traffic, and the very large groups of motorcyclists over taking in both directions, clearly we were on one of their favourite rides!! Thirty or forty passed us at one point making it very unpleasant. I was very pleased when we finally reached the summit at Wheddon Cross. All that was left was the descent and fast 10k on a good road surface and thankfully no motor bikes, 4hrs 35 mins after leaving Minehead I arrived back at the HQ and a welcome cup of tea and a cream tea! Jam on cream!!!
A great day out in good company, weather was really good, sunshine most of the day – 5300ft climbed, 63 miles covered and I still felt OK!!!

Monday I was out again round the levels this time, 51 miles round Henlade, North Curry, Athelney, Langport, Muchelney and back through Hatch Beauchamp, I was feeling quite tired after this ride as there was a strong northerly wind. I had a new food trial today peanut M&Ms, seemed to work at keeping the energy up as well as hunger at bay! 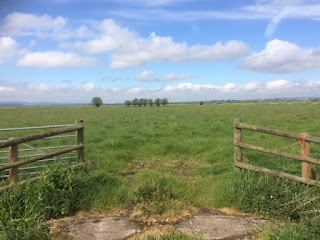 View over the levels West Sedgemoor, Below Curry Rivel

Tuesday was a ‘retrobike’ ride to meet up with Yeovil cycling club at Kingsbury Episcopi Community café. I didn’t realise it was so cold, as I set off down the cycle track, my Garmin said it was 6.4 degrees!!! The Gazelle felt comfortable except for the ‘cramped’ brake leaver! I thought the gears would be too big but they felt good and no problem, by the time I reached the café after 12 miles I was feeling very cold so the tea and crumpet was most welcome. A good natter before we discussed the ‘retro bikes ‘outside  - a Stan Pike, Mercier, Gazelle and a Velo??? All classic bikes going back to 1979 it was good to see them out again. The sun had come out now so the temperature had gone up by 10 degrees!! So a pleasant ride home and 25 miles in the bag!!! 139 miles in three days, good training! 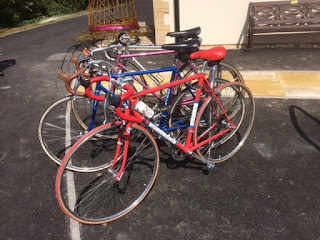 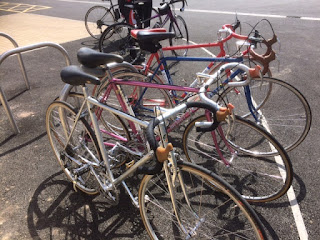 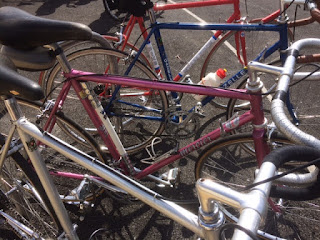 No running this week as I need to get the miles in, only 2 weeks to my Manche to Med trip! Still collecting bits and pieces, thinking about clothes to take etc.
Posted by IanB at 11:48