More runs and a Park run

Wednesday [15th ] is normally Wobblies day but last Wednesday dawned wet, the forecast was to improve but there were heavy showers as the start time , so I bailed out, disappointing but didn’t fancy a wet ride. The afternoon seemed to improve so I decided to run and did my 12 mile road run round the lanes and the local reservoir. Lovely as the sun came out, and it felt quite warm, I seemed to be setting myself a good pace, at 9 miles the weather suddenly deteriorated and it poured down, even though I had my jacket and hat I decided to push on, the roads now running very wet! As I approached the local estate there was a fantastic rainbow, which I managed to capture on my phone! 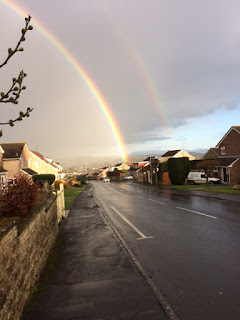 I managed less than two hours for my run, which I was pleased about, thinking I might be getting a little fitter after all! Legs tired, but still managing to avoid any injuries.
Thursday was a rest day, the weather still not good although considerably milder than the previous weekend.
Friday [17th] I met up with Rachel to do my Neroche off road run, 7 miles, good to have company as all my running is on my own, R will be my running mate on the Grizzly, but! She was suffering a heavy cold, and with her hectic job as a teacher struggling to get out running, my experience of R is that she will be fit by the time of the race! She always is!!!!
The local cycle club usually meet on Friday afternoon to ride up to Langport, as the weather was really good, so as Mrs IanB was out I met up with them, [was this a good idea after an eight mile run in the morning?] there were eight of us, several Wobblies there but also some younger riders, we set off at a high pace, and I struggled to stay with them, I noted 25 mph on my Garmin several times!!! on the way to Langport, I did try to do a stint at the front [but on the downhills or flats] soon drifting to the back when the road went up again. I was glad to see the café!!! To recover, the ride home was just as hard except that towards the end we all came back together I think I was feeling the eight mile run I did in the morning, well that’s my excuse 37 miles of hard cycling.
Saturday my daughter was keen to do the Park Run down at Seaton, this was the first time either of us had done one. We drove down and parked on the front and walked down to the start, a briefing for us ‘newbies’ before we lined up for the start.
We were soon running down the esplanade with about another 150 runners. The course is two laps of the Esplanade that also includes two short sections of the dreaded shingle beach. We kept in the latter end of the group, my daughters running over the winter has only been once a week so she was doing really well. The weather was really misty with a light wind from the East creating a headwind. It was a good morning out and the 3.1 miles went quickly, we recorded 34 minutes for our first Park Run, something we can build on, interesting the Garmin said we had a total ascent of 99ft! Which seems odd along the sea front? We really enjoyed the run, and as we finished the mist lifted and the sun came out!! The rest of the day was lovely and warm with good sunshine.
Sunday [19th] I cycled with Mike, temperatures were still mild, but it was a very grey day with a light wind. A steady 31 miles round the lanes, again dodging the hedge cuttings, lots of lambs in the fields now, catkins and some pussy willow, loads of snowdrops in the hedgerows, hopefully spring is on its way, there is some warmth now back in the sunshine, so hoping we have escaped the worst of winter weather and so far only a light sprinkling of snow last month.
Monday [20th] was long run day, an early start saw me parked on Seaton sea front, and running by 7:45 am!! 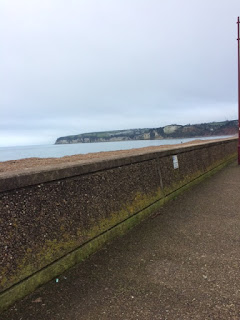 A grey dawn on Seaton seafront

The weather was mildish, but very grey again. It was lovely running down through Beer, no tourists yet, too early in the year, over Beer Head no dog walkers and descending to Branscombe it was deserted, I was moving well, the trails not too muddy. I climbed up past the school, which is perched on a hill overlooking the village, I got there just as children were arriving for the day, one parent commented ‘it must be Grizzly time as you’re the fourth runner we have seen this morning’  I was soon descending down to the Fountains Inn. The climb up to Branscombe cliffs was now starting to sprout the bluebells and garlic shoots. 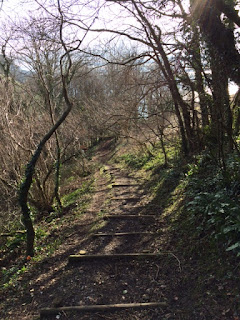 steps down to Branscombe beach, the suns out!

I ran down the steps to the steep field before the beach, just as the sun came out, a ‘proper’ spring day. I ran the beach, just as hard as ever, never gets any easier no matter where you run, each foot fall sinking in, like running on marbles, the climb out of the stairway to heaven made my legs ache. By the time I hit the steps out of Beer my legs were really aching, and the final climb out of Seaton Hole was even harder, even though it was very short. The sun was shining as I ran back to the van and a welcome mug of coffee.  I did try harder to make sure I ate and drank today, it was as hard as before, my time, no quicker! So another 12 miles towards my training, I must up the miles to ensure I can complete the 19 for the grizzly as well as the 3500 ft of climbing that’s twice as many feet as I do in my 12 miler. I will try to head to the Quantocks for a longer run at the weekend as it’s difficult to get the distance in along the coast without much more climbing!
Wednesday[22nd] dawned damp and wet, but the promise was it would clear later, so I out in my Paramo and headed to meet up with the Wobblies for the Wednesday morning ride, five of us headed over Combe St Nicholas and out to North Curry, started off wet, but by the time we reached Bickenhall the sun came out!!! Round through Five Head and Barrington before Tea and cake at the Community café at Seavington St Michael, lovely service, lovely tea and good banter! The start from the café is a steep uphill out of the village, but we were soon over the top and heading back along the cycle track and back into the wet weather!!! Apparently it had rained all morning at home so we were lucky and had the best of the weather! 35miles.
Thursday, 23rd, Morning spent doing my bit at school hearing the children read, the drive over the Blackdowns made a little scary at times with Storm Doris!!!!!  After lunch I headed off into Doris again, a hard head wind for the first couple of miles of my run and uphill, an 8.27 mile run round the lanes, made much harder by the strong wind. But at least the rain held off.